Before India could get its flag hoisted in the mast and bravely drive away the Britishers away from the land it had to undergo way too many changes, reforms, revolts and fights.

Of many such revolts one rebel that could be termed as the First War of Independence or also called as the Great Revolt of 1857, where India woke up to fight for what it believed was immensely wrong and stood up against the British Raj.

Below are some of the major incidents that gave rise to the formation of the First war of Independence of India.

If asked what was the main reason behind the ignition or the formation of the First War of Independence then certainly this incident would be the answer. 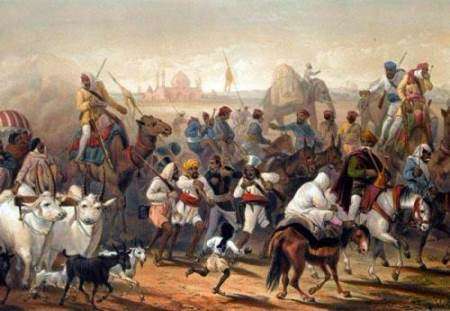 This army of Sepoy regiment mainly consisted of men from India and above all consisted men from the two different communities – Hindu and Muslim community.

It is also known that these two communities have a strong hold in their religious belief system. They were entitled to devote themselves to the religious practices.

British officials not sensing the delicacy of this fact proposed a new weapon in the sepoy regiment, a weapon made from some greasy substance that had a presence of meat like particles in them. The weapon had to be operated in two different steps.

They denied using that weapon. But as we know and as the history has shown that the British officials forced the Indian Sepoy to use the weapon otherwise the defaulters shall be punished severely.

This raised many oppositions as well as there were many cases of Sepoy being punished, fired from the regiment sometimes even executed for opposing. One of the member of the Indian Sepoy regiment was Mangal Pandey, who strongly opposed this ritual.

And started the Sepoy mutiny as it was called. Mangal Pandey led this force formed of Indian Sepoy and led this opposition at Barrackpore in the year 1857 in March.

Although the revolt stared small and in the small region of a small regiment but the main purpose and the spark of the revolts against the opposition of covered majority of India.

The north and the south part of India joined this revolt of opposing the imposition of the British Raj. The revolt spread from Narmada in the South of India to North till Punjab.

Soon the entire Sepoy regiment blazed in this one revolt against the British Raj. The revolt was popularly called as the Sepoy Mutiny.

This revolt resulted in many different changes which were otherwise felt impossible by the historians. One being the unification of the Hindu and the Muslim communities. They came under one roof and opposed together. The prevailing Mughal Badshah was Bahadur Shah.

The two communities had accepted him as the ruler for both the community and opposed or refused to follow any third ruler.

The Indian Sepoy made an outburst and this resulted a heavy impact in the British Raj. The Sepoy Mutiny was the beginning of the Great Revolt of 1857 or India’s First War of Independence.

The Doctrine of Lapse

If the Sepoy Mutiny was the spark of the First War of Independence of India then the Doctrine of Lapse would be the driving force or the fire that covered the entire country of India into opposing the imposition of laws of the British officials.

The Sepoy Mutiny only included a handful of people or troops to fight. But the Doctrine of Lapse gathered quite a number of people from different spheres of the society to fight against the British Raj.

The noble man and the Kings and the rulers were involved in the revolt. Before that let us know what the doctrine of lapse states.

It meant in the expansion of the British raj and bringing all the states or the kingdoms of India under them. This surely did not please the Indian rulers. The prominent kingdoms such as Jhansi, Nagpur and Samabalpur were under the direct influence of the policy.

Lord Dalhousie who had imposed this policy had managed to take over prominent kingdoms such as Oudh under the British Rule. And so many other kingdoms too fret this policy. This gave rise to another outburst and resulted in bringing one of the queens to the battle ground.

Rani Lakshmi Bai of Jhansi marched to the battle ground carrying her adopted son behind her back. She bravely fought and opposed the British army but unfortunately, she lost and was killed in the battleground.

But this did not hinder the impact she made in fighting the British Raj and their insensitive policies.

The doctrine of lapse made many rulers angry as the British did not support them any further. The rulers of both the prevailing communities suffered equally harsh behavior by the British officials.

They refused to accept Bahadur Shah as the ruler and denied extending their support to them and so there was a mistrust between them.

On the other hand, the Peshwas were also neglected and this made the Indian Hindu rulers infuriated with distrust towards the Britishers.

So, in order to oppose the doctrine of Lapse all the rulers set their own revolt and opposed the British army in every possible way. And so, the mistreatment that the Indian rulers, army men and even on occasion the traders received sparked and led to the formation of the great revolt of 1857.

Some other factors that led rise to the First war of Independence were economic factors. As mentioned previously that there was a rise of mistrust and mistreatment by the British officials towards the Indians, this included a section where they were mistreated on the grounds of economy.

There was a massive difference in the payment of the Indian workers. The Indian Sepoy were paid very less as compared to their European colleagues.

They were discriminated on the grounds of color and caste and mistreated. The merchants too lost many of their works and sometimes even goods due to the infuriating policies made and imposed by the Britishers.

The landlords too lost their lands because the policies would always be in favor of the officials leaving the landlords helpless so much so that they would lose their lands with the blink of an eye. All these gave rise to the First War of Independence of India or also popularly known as the great revolt of 1857.

The revolt is an example of Indian struggle