We all celebrate Diwali and children love to burst crackers or fireworks. Imagine a small blaze coming unexpectedly out of a distorted cracker and it leaves everyone around with their hairs flying.

The sight of a small occurrence of fire leaves everyone worried and not knowing what to do.

Imagine large fumes coming out of a building on fire. Who is actually going to come forward to douse the huge flames?

A layman cannot even think of going near the structure on fire, as the enormous heat it emits from a fire breakdown is sure to push people miles away.

So who exactly is going to come to tend to these fires and calm the building down, yes, it’s the fireman who is trained to carry out this task. The thought of a siren from a fire engine is sure enough to scare people around.

So, when someone is caught in a critical fire situation, the first person coming to anybody’s mind would be a fireman or technically speaking, a fire fighter.

There are various reasons why a place or a building catches fire.

May be a short circuit inside a building caused fire, may be an inflammable element triggered fire, a cracker factory catches up fire if somebody manhandled the premises, chemical factories and industries fight fires when elements in their chemical bases react with each other causing huge fires.

Petroleum installations are susceptible to fire breakdowns as they are highly inflammable in nature and need to be handled with expert supervision at all times.

Forests catch fires when trees in the forests are totally dry and exposed to excessive heat from the sun.

The gas cylinders we use in our kitchens are also equally inflammable and hence care needs to be taken in using them. Accidental fires inside the kitchens due to mishandling kitchen stoves create big fires at home.

Cylinder explosions and the entire house going on fire is something we hear quite often and it’s due to human error and carelessness that these incidents occur.

When we encounter a small fire accident at home, we can douse the flames by throwing sand or probably with a bucket full of water.

What if this incident happens on a large scale, if a big building is on fire or a forest accidentally catches fire? There are fire tenders to take control of the situation. 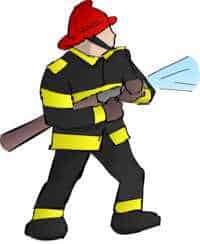 A layman can obviously not control a big fire by throwing few buckets of water against it.

It needs gallons of water supplies thrown at it in a controlled and specialized manner, which only an expert can handle.

Fireman work in fire stations where they are recruited after providing them with specialized training to handle high risk and critical situations involving fire accidents.

There are fireman who are trained to handle fire accidents that happen in towns and cities. There are other fireman who are taught to bring mass fires under control, like for example a forest that is suddenly under fire.

Fireman are given training to use the fire engine effectively to bring a big fire under control.

They are probably the most brave and courageous people who are working in a high risk environment. The act of dousing the flames and bringing a fire under control is not as easy task.

Fireman have to brave the heat emitting out from a huge mould of fire and work under critical circumstances, sometimes risking their own lives too!

They are stationed at a fire station, which provides them with special protective gear to fight huge fires.

Fireman wear heavy, protective gear to blaze the heat coming out of flames and to avoid any kind of personal injuries that may happen.

They are provided with helmets or protective headgear to protect their heads from any falling substances or any other related risks.

Firemen are also given training in emergency and first aid services as a fire accidents may or may not cause injuries to people trapped in a building.

Providing first aid services and handling emergency situations is part of their work as they can save many lives in critical situations.

The fire station is in charge to train its personnel thoroughly to handle any kind of critical circumstance and tend to suffering people by immediately acting upon their wounds.

Importance Of ‘Presence Of Mind’

When we light a fire cracker and it doesn’t seem to go off well, what do we suspect to have happened? Either the cracker is a defective one which may or may not explode or we could try lighting it another time.

Thank god for the presence of mind he provided in handling this small incident. Suppose we did otherwise and planned to light it another time.

At the same instance, suppose the cracker got active and ticked off simultaneously, what a disaster it would result in. This speaks of a poor presence of mind that couldn’t handle the situation correctly.

The above explanation in some ways describes what the firemen go through when they are performing fire dousing tasks. Fireman need to have a critical thinking with a rich presence of mind.

Tending to fires and bringing them down is their task no doubt, but which flames to act upon first so that they don’t create more havoc has to be decided upon first.

Decision making in critical situations like these calls for extraordinary mental strength. Since every situation throws a new challenge at the fireman, they have to be on their toes to welcome any unforeseen incidents unfolding in front of them.

Managing fires and bringing them under control asks for extreme physical strength and the ability to sustain in such situations.

Bravery and courage to take over any kind of situation is another challenging thing firemen have to face. This explains why they are branded as the most courageous and brave professionals.

Fire fighting is an arduous job and calls for high physical and mental strength to handle critical situations.

Understanding the intensity of a situation and acting upon it in no time calls for extraordinary talent. On the other side, a job in fire fighting helps save all those lives trapped under a fire breakdown.

The lives of the trapped men lay in the hands of the firemen tending to the fires.

Evacuating people from buildings on fire is in itself a challenging task. The lives of many rest in the hands of the fire fighters and they aim their best to save maximum lives possible.

They say doctors belong to the noblest profession on earth since they always work on saving a human’s life. The job of a fireman is no less demanding and calls for equal importance.

Every situation throws a new challenge at the fireman and it rests totally in his hands, how he is going to bring a critical situation under control.

Special training and highly protective gear to protect oneself from the risks thrown at them is provided by the fire station.

The fire station is responsible for providing quality training and good decision making capabilities to the fireman.

It should equip them with enough facilities to bring a tough fire under control in as less time as possible. The fireman should be covered under insurance covers since they risk their own lives too, when they are acting on a fire.

Fireman act in tough, real time situations and courses to increase their mental abilities and stress handling abilities could be conducted.

The fire department is responsible for all its employed fireman and provides them with special schemes and insurance covers by the government.

Including modern equipment’s in handling fires and seeking awareness and methods to use them takes a long way in understanding this tough profession.

Fireman should be given training in modern equipment’s and help them with reducing time required to douse a big fire and bring the situation under control in no time.