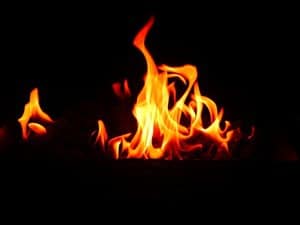 Fire: The Product of a Chemical Reaction

We are always told to stay away from fire and things which can be set on fire easily (flammable substances). The simple reason behind this is that fire is hazardous to our body.

Our skin burns when it comes in contact with fire and therefore, it should be avoided and precautions should always be taken while dealing with fire.

Fire is basically the result of a chemical reaction which involves the presence of air (oxygen present in the air) and a fuel like petrol, kerosene or wood.

These three major components together are known to form a fire triangle which needs to be present in proper composition to generate a flame. It is basically when the fuel combusts that is when the fuel is heated in the presence of oxygen then the fuel starts burning.

Overall, it is important to understand that combustion is the principle behind generation of fire and also, there is a particular temperature for every fuel at which it will ignite.

For example, if we take petrol as a fuel and heat it, it will not burn immediately. It needs to be heated till a particular temperature is obtained that is the ignition temperature needs to be reached for the fuel to ignite and start burning.

But if the heat or oxygen or the fuel supply (basically any one component of the fire triangle if removed) is removed after the ignition, then the fuel will not continue to burn and the fire would not spread.

If the fuel, heat and oxygen are being supplied continuously to the already ignited fuel then the fire will spread and the flames will be different depending upon the rate and type of combustion.

In complete combustion, the air or oxygen supply to the burning fuel will be enough for the fuel to combust completely. This means that the fuel gas will completely react with the oxygen and therefore, needs that much amount of oxygen to react.

This type of combustion will give out an orange colored flame and will also give out lot of smoke either colorless or black colored smoke depending upon the nature of the fuel.

A few good examples of the fire which has resulted from an incomplete combustion are; forest fire, grass fires, fire generated by burning wood, dry leaves, mostly organic matter, etc.

The incomplete combustion is very dangerous to the land on which the fire is burning and to the people who are present around the fire.

For example, a forest fire will damage the soil, trees, overall vegetation of that region and along with it, the fire will also give out the smoke which will be dangerous to the animals and any people around who breathe this smoky air.

The smoke which is generated from the incomplete combustion of the fuel and also depending upon the type of fuel (in this case, organic matter) will contain a lot of toxic gases and particles which are carcinogenic to the human body if inhaled in large quantities.

Therefore, it is very important to understand the hazardous effects of fire and the smoke generated from it as it is very easy to neglect the danger from fire.

Fire can also be classified into two other categories which are natural and man-made fire.

Natural fire will basically include any fire which does not involve the interference of man. For example, the forest fires which are seen in the summer season which is the result of extremely hot temperature is a natural forest fire.

The best example of man-made fire or a land being set on fire, will be the case of shifting cultivation. This type of cultivation involves burning of the agricultural land when the crops are already harvested and there are only weeds over growing in that land.

This type of fire is harmful to the soil of that agricultural land as it takes away all the fertility from the soil and therefore, the soil becomes useless for cultivation.

There are also different kinds of man-made fires which are usually done to set someone else’s property on fire for their own benefit (the benefit can be financial or due to any personal agenda like revenge).

Whenever any land is burnt and if the fire is severe, a fire investigation is carried out to find out if the land was set on fire deliberately or if it was an accident.

If the fire was found out to be a deliberate fire then it is known as an arson and the person who set the fire is called an arsonist.

There are many criminal cases in the past decade which show that fire is also used a means to get revenge or financially disrupt someone.

Thus, all the above examples show that even if fire is very useful for us to cook food and keep ourselves warm in cold conditions and weather, fire has much more disastrous effects on the nature as well as to humans and therefore, should be used very carefully.