Feathers are tiny epidermal outgrowths that cover the body surface of the birds. These are the characteristic features that distinguish a bird from other living organisms.

These variations in shape, size and colour help us to distinguish one species of bird from others.

They are considered to have evolved from the scales of reptiles. There is also some evidence of feathers on some dinosaurs like Archaeopteryx, though in primitive form, but it had started developing.

At the mention of term, ‘feather’, the first thought that comes to our mind is FLYING.

Which is true, the basic function of feather is to aid a bird in the process of flying. But even flightless birds like penguin and ostrich have feathers on their bodies.

This implies feathers perform other functions too.

Since feathers cover the entire body of the bird, it means they perform the function of protection. What clothes are for human, feathers are for birds.

Like clothes help us in maintaining our body temperature, similar function is performed by feathers in birds. 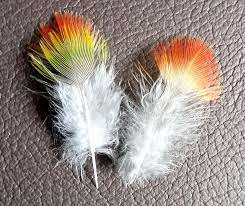 The feathers trap air in pockets close to the body of the bird, hence creating an insulating layer, which keeps them away from cold.

Humans get Goosebumps as a defense mechanism against cold, on similar lines; a bird puffs up its feathers to fight the cold.

Sometimes they even tuck in their head and toes when it’s chilly and expose them when the heat returns.

This insulating property of feathers makes them useful in making winter clothes like jackets and overcoats. These help the human body stay warm.

Also in earlier times, the cave men and even today, the tribal people wear clothes (mostly skirts) made out of feathers sewn together.  It protects them and gives them warmth.

Feathers are made of a complex protein called beta-keratin. The chemical structure of this protein is very similar to that of cellulose. This makes the feathers water-resistant.

Thus birds like ducks can swim and float in water without getting completely drenched. In a poultry farm, more than half of farm waste is the feathers of poultry birds.

These feathers undergo processing and are converted to fertilizers or animal feed, due to high protein content.

Due to similarity with the structure of cellulose, these feathers are also replacing wood pulp as a raw material in the markets. Wood pulp is used to make products like paper, diapers, etc.

But now for all these, feathers are used instead of wood pulp because of its easy availability and harmless to environment.

Thus this reduces the cost of production of these products, which makes them available at cheaper rates in the market. Therefore, people prefer buying these items more.

The colour of a bird is the colour of its feathers. Different colours of different feathers are a result of varying amount of pigments present in a bird’s body.

Their bright colours catch the eye of the predator very soon. Whereas, some birds have feathers of colour similar to their surroundings.

For these birds it is very easy to blend into their surrounding and camouflage. Hence, they are hard to be spotted. This is a survival technique many birds have adapted to.

Apart from all these uses to the birds, feathers have a great significance in the human lives too. From being used to make clothes, to being used as a décor item, feathers are an inseparable part of our lives.

In earlier days, people used quill feathers to dip in ink and write with them, until pens were invented. Even today, many pens are made in a feather shape to give it an antique touch.

Feathers are also used to stuff pillows, blankets and mattresses, owing to their soft and fluffy nature.

Talking about culture, feathers are a very important part of the hippy and the gypsy culture. Feathers are considered to be a symbol of free spirit.

Many of the bohemian jewelry like necklaces and earrings have feathers in them. Feathers are even used to make hair accessories like head bands and extensions, etc.

Also, feathers are an important element of the dream catcher. A dream catcher is believed to filter the good dreams from the bad ones and protect the ones sleeping under it from scary nightmares.

The role of feathers in dream catchers is of the ladder that lets the good dreams descend upon the sleeper.

Lastly, like every object around us teaches us a lesson of life, the feather teaches us the lesson of ‘existence’.

When attached with the bird’s body, each feather has its importance in making the bird fly. One tiny feather makes the bird strong. The feather gives a meaning to the existence of the bird. It empowers the bird.

Similarly, when a human exists in a society, within a team, his presence in the team makes the team stronger.

Being a part of a team, a person has certain duties, certain responsibilities towards the team. As a whole, the team can only excel when each of its player plays its part effectively. Here the team is compared to a bird and players to the feather.

On the other hand, when the feather is longer attached to the bird for some reason, it flies high up in the sky.

Reaches to heights where it was sometimes not possible to go with the bird. Or otherwise, it becomes useful in various other manners as mentioned above. But it is never a waste.

Which means that even though not being a part of any team, doesn’t make any individual a useless one.

Everyone has their personal talents; their abilities which help them go places even without anybody’s support.

One should learn from a feather that even though the exterior might look soft and delicate but the internal strength is what matters.

Like a feather’s most basic function is to help in flying, but sometimes, it is put to other uses as the situation demands.

One should never give up on themselves and on life, because we might not be useful in the way we thought to be, but life surely will put us to use in the way we were meant to be.

Sneha is an out of the box thinker who is always on a learning spree with her keen observational skills. She is an optimist by nature and grabs any good opportunity that comes her way. She loves blogging and more on her could be read from : theboundlessbeing.blogspot.in