Of all the scientists I have read about, I like Thomas Alva Edison (born on 11 February 1847,) the best, because he was a hard worker and a very fine human being.

He is credited with inventing the telegraph, the electric bulb, the telephone, the dynamo, the motion picture machine and the electric train.

There are hundreds of other minor appliances that he invented. Such a great and genius personality. By the way, in school life  he was not very clever, but he was hardworking. As a scientist, he was patient and humble and kind.

He encouraged the youth to work hard and to learn from their mistake. He is the only man who first provided the entire city of New York with electricity. The next city he electrified was Paris.

Even though he met with failure many a time, he was not discouraged. He tried every possible known metal to make the filament of the electric bulb. Every time the bulb would glow for a short time and then burn out.

Just by chance he decides to use a non-metal. Carbon. Wonder of wonder – the bulb not only emitted light, but kept on doing so for a long time.  It was his patience that gave him victory over darkness.

He is my role model too. Just because of his patience and dedication towards work lead’s him to be successful.

In today’s life whether we used electric bulb, or the latest Led bulb, no matter, but we should always recall this man, who gave path to light over the darkness.

I do hope that when I grow up I become a scientist like Thomas Edison and work like him.

Some of Thomas Edison Inventions

Awards Edison got for his successful inventions

Many more to be listed, but I have describe few of them above.

It is very important to have a role model in our lives who will inspire us to be someone in future so as to leave an everlasting mark on history. Having a knack for science, my favorite scientist and role model had always been the late Dr.A.P.J. Abdul Kalam, one of the leading scientists of India’s space program, and also the former President of India

The life of Dr.Kalam is a tale of perseverance and has numerous things that we can learn from both from the perspective of science as well as for the betterment of ourselves and an individual.

HIS EARLY LIFE AND STRUGGLES

He was born into a middle class Tamil family in an island town of Rameswaram in the state of Madras. His father Jainulabdeen didn’t have any kind of formal education, nor was he wealthy. In spite of all these hindrances, he had in himself great wisdom and had a truly generous spirit.

His mother Ashiiamma was a lady full of care for everyone around. She loved to feed people and every day at home far more number of people ate than the total members of their family.

Young Dr.Kalam had many siblings. He was short with undistinguished looks. His father always preached and practiced to live a life devoid of all unnecessary luxuries. 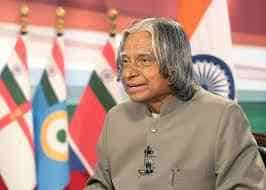 From early childhood itself Dr. Kalam had a tremendous want to study science. Knowing the unknown had always been what he strived for. His physics teacher at school had been instrumental in shaping this talent of his into what was to revolutionize the Indian scientific community.

After completing his bachelors in science in Physics, he wanted to study engineering. In order to fund this desire of his, his sister, had mortgaged her gold bangles to procure money. While in the first year of engineering at the Madras Institute of Technology, Kalam always

desired to fly and had subsequently chosen aerospace engineering as his field of specialization.

After graduating from the Madras institute of Technology, Dr. Kalam joined the Defense Research and Space Organization (DRDO).

His work was of such vigour and prominence that just after nine years of service there, he was transferred to the Indian Space Research Organization (ISRO) as the project director of India’s first Satellite Launch Vehicle (SLV-III) which after 10 years of hard work came into reality placing the Rohini Satellite in the near-earth orbit.

The story of this SLV development also teaches us something greatly about Dr.Kalam, that how he was a person of immense hope and indomitable spirit. The ISRO team had faced many setbacks before the Rohini satellite was finally successfully orbited in 1980.

During the mid-70s, when they had prepared a launch vehicle, instead of going to the orbit, the satellite failed and landed into the Bay of Bengal. Everyone but Dr.Kalam was disappointed. When time came for the press conference, he did not let any of his team members go to the stage, he himself faced all the criticisms and ill-talks.

Few years later when the mission was successful, at the press conference, Dr.Kalam was at the back and he told his team to go to stage and take the credit. This spirit of Dr. Kalam is truly remarkable, both as a scientist as well as a human being. He was an ideal leader when time came to face the harsh setbacks; he was the one who took responsibility for it, whereas when success was achieved, he gave the credit to his team.

Dr.Kalam since the days of his early student hood had a desire to fly. So he applied for the test for being a fighter jet pilot. He was rejected narrowly. He placed nine for the post which had only eight vacancies.

Post this defeat he was extremely disappointed and for once thought of quitting everything and becoming a saint. But it was only because of his indomitable spirit that he did not give up and tried other avenues where his skills were put to better use.

His achievements as a scientist

Dr.Kalam had a very illustrious career as a scientist
successfully launched satellite Rohini to orbit through the SLV-III.

In the 1980s he led India’s missile programme. Under his leadership, India became a major military power after the successes of Agni and Prithvi.

Not only in the field of aviation and defense. Dr.Kalam’s work toward the development of nation knew no bounds and had no limit to his scope of work. In 1998, along with cardiologist Dr.Soma Raju, Kalam developed a low cost Coronary stent. It was named as “Kalam-Raju Stent” honouring them

In 1998, the Pokhran-II tests showcased India’s nuclear capabilities to the world. Mr Kalam’s role was instrumental in the project.

His views on war


Dr.APJ Abdul Kalam, had a very interesting opinion about war and weapons. He was a peace loving man till death and never ever had resorted to any form of violence to achieve some specific target. However he was of the opinion that every country should be self-sufficient in terms of armory and their inventory of weapons should be as powerful. He always said that weapons are necessary to prevent war. He used to call nuclear weapons as ‘weapons of peace’.

His love for Everyone


Dr. Kalam while serving his term of Presidency did everything in his power to not only spread love for science but also bring the masses closer to the government.

He was known for making trips pan India meeting students and addressing gatherings inspiring them with his words of wisdom. He loved children and the children loved him too. Till date he is considered by many to be the most knowledgeable and approachable President that the country has ever seen.

Dr.Kalam is probably one of the greatest scientific and wise minds that the country will ever see. His life and work will inspire almost anyone. He has faced all sorts of problems and came smiling out of them with triumphant achievements. His life will be an inspiration to all and continue to inspire generations to come.