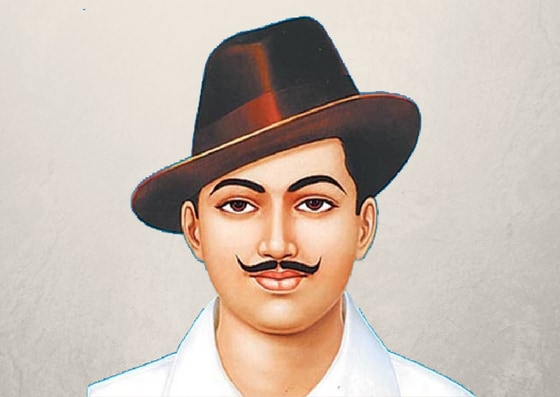 Bhagat Singh is known today to be one of the most brilliant and powerful revolutionaries that our country has ever had. Widely known and respected as Shaheed Bhagat Singh, this outstanding  revolutionary was born on 28 September 1907 in Punjab’s Jullender Doab district.

Being born in a family who was an active participant in the independence struggle Bhagat Singh grew up in an atmosphere which inspired him to dive in the freedom struggle at a very young age.

Bhagat Singh was a Sandhu jat born to parents Kishan Singh and Vidyawati. With his birth both his father and uncle were released from the jail. Unlike all sikhs of his age then, Singh did not attend the school in Lahore but was admitted to Dayanand anglo vedic school.

His family was a follower of Kartar Singh Sarabha which had a great influence on the mind of young Singh. The loyalty towards the country and to free mother India from the clutches of the impending British raj ran in his blood  and veins.

Bhagat  Singh was a keen learner of the European movements specially the Young Italy movement of Guiseppe Mazzzini and thus was inspired to find Navjavan Bharat Sabha in the year 1925. In the following year it got merged with HRA (HINDUSTAN REPUBLICAN ASSOCIATION), this is when Bhagat comes in contact with outstanding revolutionaries Sukhdev and Chandrasekhar Azad.

Singh believed that to create a sense of nationality and oneness among the masses of the country one needs to spark the fire of patriotism among the people and this could be done by circulating  written pamphlets and poems.

As a result of his ideology he started a magazine “Kriti”.  Singh’s active involvement in the freedom struggle and his increasing popularity among the youth made the British government insecure and thus in may 1927 he was arrested.

The year 1928 was very crucial for Bhagat. The British government held a Simon comission to discuss the liberty and laws imposed on Indians. Being an event for the Indian masses it still did not include any Indian representative.  Hence it faced a lot of protest led by Lala Lajpat Rai.

He agitated against this and led a procession towards the Lahore station and in order to suppress the mob lathi  charge was imposed to brutally beat up the protestors. Lala was injured severely and died within a few weeks. A rage to avenge Rai’s death burnt the country now. Bhagat Singh managed to kill the British police office John P Saunders soon after.

Later he planned to bomb the Legislative Assembly in Delhi and after two successful blasts he confessed and surrender himself to the police custody.

In the jail Bhagat saw  a discrimination between Indian prisoners and others and therefore along with his fellow mates decided to go on a hunger strike.

Bhagat was man who fought against injustice in all possible forms. He made sure that no discrimination flowered anywhere. This brave child of mother India was executed on 23 march 1931 at a tender age of 23. Bhagat Singh’s death went beyond boundaries and burned flame of rage and protest in the hearts of the masses.

Shaheed Bhagat Singh was a true patriot and lover of the country. He ensured that the British were afraid of the movements that were initiated by the Indian crowds. He managed to scare them off.

This man with no fear and courage to fight against wrong instigated the youth of the country to come forward and fight the oppression of the British raj. Not only his life is an inspiring tale but his death went beyond. He is the kind of man whose death in itself becomes a lesson. Singh as a person exists beyond mortality.

These lines aptly define Singh and his struggle for freedom for his only love mother India.