Paragraph on My Favourite food is Pizza 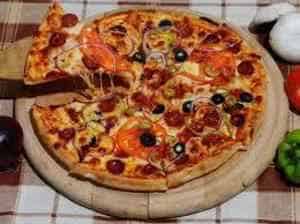 If there is anything in this world that I could eat forever and never grow tired of then it would be pizza. I had my first pizza when I was 15 years old.

I went with my friends to celebrate our achievement in inter- school debate competition. And ever since I love pizza and my love for pizza increases every time I eat another one.

Some of my favorites are meat lovers, barbequed chicken, chicken sausage, golden corn, veg loaded, cheese burst. Quite mouthwatering!  There are a lot of things about pizza that I love.

And that not only includes the exquisite preparation of the item but also the rich culture it has been through.

It has gone through many forms before it was the pizza that we eat now. And that is also one of the reason why pizza is my favorite food.

Why pizza is my favorite food

The first and foremost reason would be that it is really tasty. Hot baked bread with melted cheese, pepperoni and sausage along with a dash of sauce, it’s too irresistible and too good to be passed down.

Second, one of my favorite reason is that it can be eaten at any time of the day. It’s never too late to eat pizza. It can be served in the afternoon, night and not to forget especially during tiffin time.

One of the special reason is that it is loved by all age group. You can’t really say no to a pizza even if you are entering your 60s. You can enjoy Pizza with your grand folks and with the teens as well.

The best thing about a pizza is that it’s neither too less nor too much. If you are having a get-together, serve a pizza and you won’t be called a bad host.

Now coming to the main reason why pizza is an answer to all our prayer is that it is very cheap. Almost every college student can afford one.

There is another trend of eating food in different temperature, for example we can eat pizza hot or cold but we can’t say the same about other food products such as ice cream or pasta.

Pizza is served in many varieties with different toppings, texture and even veg and non-veg in India, which is why it is the most loved food of all time.

There is something for everyone and so no more fuss over choosing what to order that has your personal favorite’s marked.

And not forgetting the very essence of ordering pizza online. In almost every location there are online pizza ordering services.

Why take the trouble to go somewhere, wait in queue for your order being taken while you can order it from your home and even more you can invite friends over for a treat. Plus point you don’t even have to look for places where you can sit.

Of all the main reason one essential thing that pizza does is that it brings people close. One can start a conversation over pizza.

Origin of the most amazing food

Well it is a known fact that pizza is an Italian dish but what many people don’t know that pizza made its journey through Spain, France, England and then to Italy.

However, the pizza that we love to eat today was the work of Raffaele Esposito, who served pizza with tomato sauce, cheese and toppings.

A 19th century baker, who was told according to popular tales, to present the pizza to the Italian king Umberto I and Elizabeth Margherita who visited Naples.

Esposito belonged to Naples. The queen was very pleased to see the wonderful and vibrant colors.

So the pizza that we now see as a combination of tomato sauce, mozzarella cheese and garnished with basil leaves is called Margherita, it was named after her.

Quite interestingly pizza made its stop at first in Middle East where it was a flat bread that was cooked in the oven, its next stop was ancient Greece and Rome where they were served with toppings such as olive oil and some local spices.

And then it got the Naples touch to it. There are many more origin stories out there. What is fascinating to know that during the Second World War pizza was one of the most favorite.

The soldiers who were returning loved this magical food. And after this the love for pizza just started to increase.

Essence of Pizza in India

In India the first company of pizza was Domino’s. It opened in New Delhi in 1996. The Jubilant Foodworks Limited which is an Indian company started the franchise.

Its company is based in Noida, in Uttar Pradesh which is responsible for running the Domino’s pizza franchise in India and even in Nepal, Sri Lanka and Bangladesh.

And ever since this food chain has seen immense growth in its consumption. In 2013 Domino’s third largest market was in India after United States and United Kingdom.

And in 2014 Domino’s 2nd biggest market was India. With the advancement in technology and a craze for almost everything turning into online, Domino’s pizza in India too was served through online ordering.

Online orders were placed first in 2011 in India and has contributed 18-20% of sales. There are almost 1058 dominos outlets in India spread across 251 cities all over the country.

Why Pizza is also a bad choice

It will be highly unfair if I don’t mention the negative aspect of eating pizza. As I love eating pizza there I am also reducing my intake of veggies and fruits which are very important for the growth of the body and its proper functioning.

The young generation especially and including myself are more inclined to having a pizza for lunch rather than having a proper meal.

People have a tendency to skip the entire meal and only take pizza which creates acidity problems for them in future.

The cheese and tomato sauce don’t work well if you are a person who frequently suffers with acidity problems. It will be utter ignorance if I don’t mention the amount of salt and calories these pizzas are filled with.

Only two slices of pizza has nearly 600 calories in it. Some outlets even go against the prescribed salt and fat content and add more of these fattening items.

But if all the above mentioned demerits are concerned and the right amount of intake is checked then again why pizza cannot be your favorite food as well. I know it’s mine!