Speech on My Favourite Cuisine 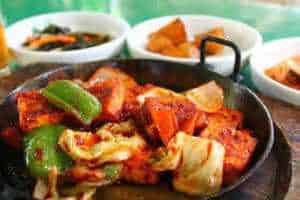 Very good morning to everyone present here today. Today I am going to talk to you all about which is my favourite cuisine in the world and what is it all about. So please bear with me and excuse any mistakes that I make me during this time.

The world cuisine refers to style of cooking or tradition of preparing food. Usually these cuisines differ in accordance with the geographical boundaries which is mostly country based. My favourite cuisine is the middle Eastern style of foods.

I prefer my foods with high amount of spices and condiments then the normal regular Indian style. What is more interesting to note here is that the Indian style of cooking is vastly influenced by the middle Eastern style of cooking because of the almost 700 years rule of the Muslims in India who were mostly migrated from Middle East.

The Mughlai style of cooking usually entails a huge amount of labor and time. The rulers who came from the Middle East were mostly from Warrior Clans. They went out to hunt and in the Jungle, itself they would hook up their capture. And they used a huge amount of spices which often exceeded the count of a hundred or 150 on normal occasions.

The Hunt was usually some sort of animal and therefore the style of cooking predominantly is a non-vegetarian dominant food. And because of the use of this huge amount of spices, the food got a very unique flavor and taste in itself which separated it from any other kind of food in the world.

My personal favourite among this Mughlai or middle Eastern cuisine is tandoori chicken which is nothing but roasted Chicken which has been cooked in a special sort of furnace called a Tandoor which is heavily involved in the cooking of these middle Eastern dishes and is primarily a sleep based furnace which runs on coal.

The coal provides heat and Fire to the walls of the Tandoor where the raw chicken or flatbread is placed. This is a very slow form of cooking and it is because of this that the food gets its unique taste and flavor. Slow cooking on low heat for a long time imparts a special charred flavor to the food. It gets a smoky taste which is extremely pleasing to the nostrils, and particularly to my nostrils.

And other specialty of this form of cuisine is that the spices in it are extremely beneficial for the human body. Most of them possess medicinal qualities which have been scientifically proven to have cured or at least prevented the occurrence of many chronic and terminal diseases.

For example, turmeric that is extensively used in this cuisine is a scientifically proven and extremely efficient natural antiseptic and disinfectant. Applying turmeric to cut wounds can actually help heal it. Black pepper is another such ingredient which is proven to help in easing the process of digestion and bowel movement. Cardamom has abilities to ward off gastroenteritis problems.

Another important space used in this cuisine in his clothes which have shown to not only cure problems of indigestion but also reduce risk of catching cancer. Cinnamon is like a wonder Spice used in these cuisines. It is a single Spice with scores of various medicinal properties.

Some brands have even started selling cinnamon dust into capsules for good health. Cinnamon helps prevent the occurrence of type 2 diabetes in later life due to Lifestyle irregularities. It has a tremendously good effect in improving the insulin sensitivity in our body which prevents us from getting fat.

I would like to conclude by saying that this middle Eastern cuisine in my opinion is extremely healthy for the human body for another reason also. The amount of oil used in this cooking style as opposed to what many people think is not at all overwhelming. Infect the dishes cooked over Tandoor use extremely low amounts of oil or no oil at all in some cases.

Many athletes around the world prefer eating middle Eastern cuisine rather than splurging on junk food when they need a break from their strict diet regime. Food is one of the best things in the world and we must appreciate it to the fullest and enjoy it.