There are lots of famous cricketer in India teams such as Sachin, Suresh Rania, Yuvraj Singh, and many more players who come across various places in India. The more interesting about them is that they played many matches and won many critical world cups such as the T20 world cup in 2007, the One-day world cup in 2011, and The champions trophy in 2013.

The full name of M.S Dhoni is Mahendra Singh Dhoni. He was a former captain of the Indian cricket team. He was born on 7th July 1981 in Ranchi, which is the capital city of Jharkhand. His parents are Pat Singh and Devaki Devi. They hail from Lvali is the Lamgarha Block of the Almora District of Uttarakhand. His parents moved to  Ranchi, where his father’s worked in the post of Junior Management in MECON. Dhoni has two siblings one sister name Jayanti and his brother’s name is Narendra. Dhoni studied in Jawahar vidya mandir in Ranchi. He initially selected in badminton and football In the clubs and District levels.

The Dhoni wanted to become a goalkeeper, but he was sent to play cricket for a local cricket club by his’s coach. Before he didn’t play cricket, his’s coach was impressed by his’s wicket-keeping skills that made him play at commando club from (1995-1998).  Based on his performance, he was picked for the Mankad Trophy for the season 1997/1998 under-16. In the 2000 year, The Indian Cricket team required a talented wicket-keeper. The Rahul Dravid captain of the Indian cricket team was M.S Dhoni to fill the place of Wicket Keeper. There was another person like Parthiv Patel and Dinesh Karthik, who were captains at under – 19 test captains of the Indian cricket team. At that Time, the M.S Dhoni was playing for India A team. During Initially matches of M.S Dhoni was not significant in the ODI carrier. After his excellent performance against Sri Lanka, He replaced Dinesh Karthik.

Under his captaincy, India won the 2007 IIC World Twenty 20 CB series and Border- Gavaskar Trophy in this they win against the Australia 2-0. He was the first Indian captain to win a series against Sri Lanka and New Zealand. He was awarded many awards such as IIC ODI player of the year 2008 (He was first India cricketer to receive this award ), Rajiv Gandhi Khel Ratna Award, and Padma Shri, India’s Fourth highest civilian Honor in 2009.

He was the first Indian captain who leads the team to reach the first ranking in the test cricket in 2009. Under his captaincy, India won The 2011 World Cup at home country. During his tenure, the Indian cricket was on the path of glory and broke many previous records.

Kohli is a very talented and wonderful player. That is why I like him. He also plays for Royal Challengers Bangalore in the Indian Premier League. In October 2017, he was the top-ranked ODI batsman in the world. He was the best batsman in India with 937 points in test cricket, 911 points in ODI cricket, and 897 points in T20I rating. The was the captain of under 19 Indian cricket and won the world cup in Malaysia. His debut match was against Sri Lanka at a very young age. He was the part of the squad which won the 2011 IIC world Cup in India. He was appointed as Vice-captain of the Indian Cricket team in 2012.

He was appointed as captain of the Indian Cricket team in the test as M.S Dhoni announced his’s retirement in 2014. In 2017 M.S Dhoni stepped down from the Limited over cricket than made him Captain of Indian Cricket Team in both ODI and T20. He was the fastest batsman to score 10,000 runs in ODI cricket in 205 ODI innings. He was received many awards, such as ICC Test Player of the year in  2018, ICC ODI player of the year in 2012, 2017, and 2018.

He was awarded by Rajiv Gandhi Khel Ratna Award in 2018, also Padma Shri, which the fourth Highest Civilian honor in India. He also awards with Arjuna Award in 2013. In 2018  He was named one of  100 Most Influential People in the world by the Times magazine. He was ranked as one of the most famous athletes by ESPN and one of the most valuable athletes brands By Forbes. He was awarded by the Sir Garfield Sobers Trophy (ICC Cricketer of the year) in 2017 and 2018.

For the IPL season  2018, he holds on RCB for the price of $ 2.4 million that was the highest for any player that year. He is the only player after Suresh Rania to score 5000 runs in IPL.

These two are my favorite cricketer because they believe in hard work. They inspired many people across the world. They came from a very ordinary background and made the famous name in the Indian cricket, not only that they are remembered by their records, which are tough to break. They are most talented, Funniest, influential, and out of box thinker. Even after their tenure in cricket, they will be my favorite cricketers.

My favourite cricketer is Mahendra Singh Dhoni, or Mahi as he is affectionately called. He was born in Ranchi, now in Jharkhand on July 7, 1981.

His father’s name is Pan Singh and his mother’s name is Devki Devi. Mahi  was the captain of the Twenty-20 team which won the inaugural World Cup.

He played his first match on the 2nd of December 2005 against Sri Lanka in Chennai.

M.S. Dhoni is one of the finest wicketkeepers our country has produced in recent years. He is also an excellent batsman and a wonderful captain. 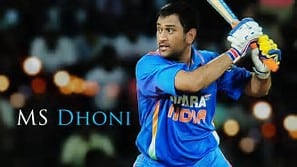 The way in which he led his team to win the Twenty-20 World Cup match against Pakistan in 2007 was amazing.

It is the most exciting match I have ever seen. He is at present the captain of the One-Day International team as well as the Test team.

He plays badminton as well. Imagine, before he started playing cricket, he was a football goalkeeper! He also loves to ride motorbikes.

I like him because he has a very positive attitude and is very confident and aggressive on the field. I also like him for his stylish hairstyle.

Recently, Mahi become my role model, by watching his biography movie “MS Dhoni – the untold story” He really worked hard to achieve success in his life.

As earlier he was ticket checker, but his goal was to become cricketer, he had played many domestic matches, and tried his best to place in Indian Cricket Team.

Yes, Mahi is my favourite cricketer, and I too want that he play for India forever. In his captainship, India has achieve many success, starting from 2007 T-20 world to 2011 “50-over World cup”.

Just of his intelligence captainship India won the world cup after 26 year.  Dreams come true for all Indian, just because of Mahi hard work.

MS Dhoni is the only cricketer who got, huge amount in the IPL, and got selected in Chennai Super Kings. Unfortunately of some issue, CSK is out from the IPL, and Mahi is in Rising Pune Giants.

Although team does not matter at all, his presence on the filed give the good result.I hope he plays for a long time and wins many matches for India.

My favourite cricketer is Virat Kholi, popularly called as Chikoo. He was born in Delhi on 5 November, 1988.

He played his first match on the 18th of August 2008 against Sri Lanka at Dambulla. He is one of the finest batsmen of our country. Now Virat is captain of Indian Cricket team 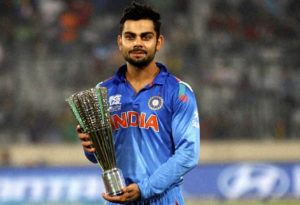 The way in which he led his team to win the under nineteen World Cup match against South Africa in 2008 was amazing.

It is the most exciting match I have ever seen. He is at present the captain of the One-Day International team as well as the Test team.

He plays badminton as well. Imagine, before he started playing cricket, he was a football goalkeeper! He also loves to dance and watch movies.

I like him because he has a very positive attitude and is very confident and aggressive on the field. I also like him for his stylish hairstyle. I hope he plays for a long time and wins many matches for India.