TOM & JERRY, the moment you hear these names, you can see a flash of pictures of cat and mouse in your mind automatically. It is quite common to get such images because the cartoon made millions of people to get into an amusing era with no-voice characters Tom & Jerry.

When I was a kid being very fond of cartoons and the most amused cartoon characters are Tom & Jerry. Of course, everyone’s favorite cartoon to date will be Tom & Jerry, without any doubt. I am as sure to this animated cartoon series as the best and heart-winning cartoon based on the creation of this series by William Hanna & Joseph Barbera.

Tom & Jerry got first released as “Puss Gets The Boots” in the year 1940, which also nominated for Academy Award for Short Cartoons.

Puss Gets The Boots is the first episode of Tom & Jerry cartoon series, which has won million hearts even with no voice and telecasted in Black-White vision.

Why Tom and Jerry are my favorite cartoon character

If you ask me or any person of the 1900s will surely start the conversation with Tom & Jerry fights and convinces even you as this is your favorite cartoon series.

Tom & Jerry became an amusement series to all of the 1900’s kids irrespective of age, gender, color, nationality, etc.

At some point in episodes, you can also see this series voicing for the characters in a few situations. We still expect more animations on Tom & Jerry with music and more voices of all characters.

Majorly, the theme of the cartoon series is Tom- a hungry cat that chases Jerry- a brave and cute mouse who lives in the same bungalow of a family.

Tom always chases Jerry and creates many traps to catch Jerry. Most of the time, Tom loses to catch Jerry even trying with all tricks learned in books showing “How to catch Mice” due to the smartness of our smart Jerry.

Jerry is the best escaper with a sharp mind and cute structure on the screens. It always tricks Tom even after getting caught. In some episodes, we can see variations of the relation between is unusual Friendship as well.

I love this cartoon series a lot and to date, I do watch on various platforms. It is the most amusing and relaxing cartoon series I have ever watched.

You can also say that people die with laughter, even the time of shot in Tom & Jerry is not more than 6 minutes.

It attracts the attention of the viewer and creates an interest to watch until the final episode of the entire cartoon series.

Though there are only 160 shots of Tom & Jerry, people admire the series to date.

I still watch this cartoon series daily, and it makes my day with fun and uplifts the joy in me.

The amusing part of this series is the collection of characters that shows up in most episodes and the fights between Tom & Jerry by the other characters.

Even there are few other characters like Duck, Female neighbor cat, and street cats in some shots, Tom & Jerry rules the entire show.

The scenes of those chases and the tricks are amusing on the screen even today.

I related those characters even to my friends who is the smartest one as Jerry and who gets always ditched with the stupidity as Tom.

This show has created and released by Americans, but it has been released globally. Some of the animated movies by the inspiration of Tom & Jerry are released in native languages of few countries like India with the national and state languages of the nation.

This has increased the craziness of this series, and also, even we know that Tom never can catch Jerry, every viewer of Tom’s lover expects to watch Jerry caught by Tom, and finally, that never happens.

The shots are very creative and interesting in the filming of the Tom tricks to catch Jerry, like using various properties in the house, which is more creative and impressive.

I used to buy things like food platers, school bags, geometry boxes, sketchbooks related to Tom & Jerry. Even I have many toys from Tom & Jerry cushions, dolls, etc.

Those are very pure and sweet memories of playing with Tom & Jerry’s cushions with cousins and siblings in the family.

We used to role-play the episodes of Tom & Jerry, as I am the tallest in the family. I used to play Tom’s role always while my cousin plays Jerry’s character, who escapes from various tricks of Tom (Me).

The music of the series is also my favorite tune, which is unique and ear-pleasing with fun-amusing tone in tune itself.

I love the most series and movies of cartoons, but Tom & Jerry is evergreen favorite cartoon series for me. Tom stupidity and the Jerry cleverness is the deadly combination of the super-hit success of the series. Tom & Jerry’s chasing is a never-ending chase where Tom ends up with no success in catching Jerry.

The facial expressions of Tom to scare Jerry and the hilarious comedy of Jerry while escaping and beating the tricks of Tom is outstanding. You can see no such cartoon series which beats Tom & Jerry. Even there is a massive update in technology.

Tom & Jerry is not only a favorite cartoon series. I am obsessed with the shots and creativity level of the entire series, which makes me die with laughter until date by watching every episode of the series.

Tom & Jerry is an animated cartoon series which has been promising on cartoon network channel since 1940’s. It forms a vital part of almost every person’s childhood days.

It was originally created as a series of short films by William Hanna & Joseph Barbara. They produced about 114 Tom & Jerry shots for Metro-Goldwyn-Mayor from 1940 to 1958. But this series still continues to rule hearts.

Even as the world is progressing rapidly, and new cartoons have taken over the industry, the era of Tom & Jerry will never meet demise.

The series is loved by one and all and holds a very special place in hearts of many. The plot originally deals with Tom and Jerry as main characters.

Tom is the big, hungry cat while Jerry is the brave, cute mouse. The series unwinds a cat-mouse camaraderie and wins hearts of millions of people watching it on a daily basis.

Normally, a cat overpowers a mouse and eats it as a meal. But, in this case, even though Tom makes all efforts to devour Jerry yet Jerry succeeds in one way or the other by escaping him in the nick of time.

But the series of events that takes place during this facade is hilariously amusing. One can actually die of laughter while watching Tom & Jerry.

One shot is about 6-10 minutes in length. Thus, it does not bore the viewers out of their mind and keeps them interested in the episode.

The best thing about this series is that it never fails to entertain people. It keeps them on their toes with the amusing tricks and hacks of both the characters.

Initially, when the series develops, some more additional changes were made to it. When it was first aired on television, it was aired in black and white colors.

But as technology developed, we see the characters gaining colors which make their sight even more pleasant. More so, Tom & Jerry was kind of a silent film but their antics took the audiences by surprise.

But with the sophistication in technology, the characters gained voice and the screenplay was also customized to add background music to the effect.

Though, till this date the characters have not been given much voice, but in some later episodes it was seen that the characters used their voices once or twice.

But the team behind the cartoon series made sure that the series retained its original charm and did not stray haywire.

Tom & Jerry are characters remembered by one and all. They make our life worth living. I have an uncanny affection towards them. I have learnt to relate to them in a prolific manner.

Even though I am an adult, yet the love for Tom & Jerry will never die, no matters what, teenagers and adults still have a profound liking in this TV series and till date, they switch on television just to see this series. 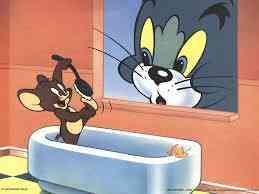 The charm of this series cannot be stolen by any new generation cartoon series.

All the other series are just hollow who play with the minds of children just to earn a few bucks.

Yet cartoons like Tom & Jerry fascinate people all over the world till date.

It provides ample entertainment without indulging in obscene acts or usage of abusive language.

In some series, Tom and Jerry even befriend each other for their own ulterior motives and entertain the audiences together against a common enemy.

I guess that episode has still not been designed when Tom finally eats up Jerry. Tom and Jerry cause turmoil in the landowner’s house.

It is always Tom who bears the brunt of the landlady’s anger. So, we see that out Tom is always at a disadvantage.

He neither get’s to eat Jerry as his food nor can he resist a see-off with the landlady due to his own wrongdoings. But nevertheless, Tom still manages to win over hearts.

The designing, screenplay and script of the TV show is minimalist with no confusing complications.

Yet it is so enticing that viewers cannot stop themselves from being hooked onto this TV series. It is an easy on the mind show which ensures viewers a roller coaster ride of adventure, laughter, sorrow, joy and trouble.

Tom and Jerry when together are always trouble and no one can stop them from the creation of mayhem and euphoria.

Tom & Jerry is a very famous and popular cartoon show of a grey colored, short haired cat and a small chocolate brown mouse Jerry. I have always been a fan of cartoon shows because it keeps the child inside me alive and happy.

It also helps me to de-stress my mind of all worries. But out of all, Tom and Jerry amuses me the most. Even when I am viewing a repeated episode, it does not bore me and always entertains me.

I don’t agree that cartoons are only meant for children. Actually, they are far better than those TV serials which fill your mind with negativity and overwhelming thoughts.

Cartoons which genuinely make you laugh lighten up the mood instantly and help in forgetting all worries that crams up brains every day.

Laughing is the best exercise for your brain and helps you young. Evergreen cartoon series like Tom & Jerry help you to laugh and live freely without worries. It helps you feel younger and less burdened every day.

Tom and Jerry is very funny and when and when I see it, I smile and laugh a lot. At a younger age, I was obsessed with merchandise of Tom & Jerry.

I had plate holders with pictures of the cartoon, bags with their pictures and what not. This obsession stemmed from my love for the character.

Tom always tried to catch Jerry but he never succeeded as Jerry was sly and more cleaver than Tom. This never ending comrades always kept my spirits up in every situation.