As a kid, I was always looking forward to holidays because holidays always meant some quality family time in the form of amazing trips to the most beautiful places all over the country.

Among all these trips, till date, the one I remember the best was the trip I went on along with my parents to Darjeeling.

Darjeeling is a hill station situated in the state of West Bengal. It shares it border with Sikkim and also lies fairly close to foreign countries like Bhutan.

The city of Darjeeling had lasted since ancient times and was inhabited by indigenous communities, until it was colonised by the British for their own leisurely purposes.

This was a trick often pulled by the Englishmen in India, turning hill stations like Darjeeling and Shimla into exotic vacations spots, and also places where they could settle in and spend time in, as the climate of such places was more familiar to them than that of the rest of the country they ruled over.

Such spots serve as major tourist attractions even in the present Indian scenario.

For example, Darjeeling, which is a separate district of West Bengal, brings in a major chunk of the state’s foreign revenue through tourism. It is a magnificent place to visit indeed.

As there are certain difficulties in connecting a hilly area to the mainland using railways, direct trains to this city are rare and one instead has to take a train to the Siliguri station, mostly.

This and certain other such connecting areas serve as the link between tourists and the city of Darjeeling. If one wishes to take a flight, the nearest connecting airport is that of Bagdogra. 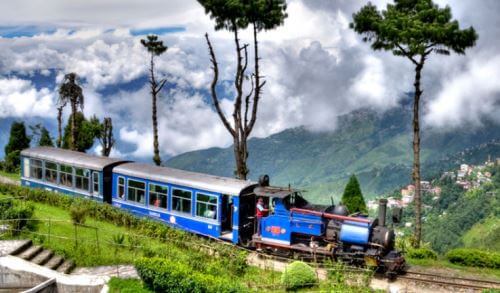 Airplanes fly frequently between Bagdogra and Kolkata. In every sense, Darjeeling is a very well-connected city which in turn smoothly facilitates tourism and that too, in the most affordable of ways.

Another major attraction of this city is the spectacular toy train.

The ‘toy train’, or the Darjeeling Himalayan Railway is an experience of a lifetime, and I was fortunate enough to have availed this rare mode of transportation while my visit to the city.

This system runs from New Jalpaiguri to Darjeeling. The toy train places Darjeeling on the world map as it is a prestigious UNESCO world heritage site.

The train runs on a narrow-gauge railway and was built way back in the nineteenth century (approximately between the years 1879 and 1881).

The headquarters of the Darjeeling Himalayan Railway lie in the beautiful town of Kurseong.

This line of toy trains is also classified as mountain railways and such railways are a rare occurrence not only in this country, but over the entire world.

The successful survival of this railway proves how efficient the DHR administration is, and adds on conveniently to the attraction that this hill station is.

While taking this train, one passes through a picturesque landscape, painted complete by clouds, hills, and the occasional appearance of the magnificent snow-clad peaks. The tunnels add on to the enigma of the journey.

The local scenery is charming and quaint and is soothing to the eyes of urban dwellers like us.

Such journeys really refresh one to their core as such sceneries are a pleasant change to the monotonous daily routines which bind us to our lifestyle.

Places of attraction at Darjeeling

Darjeeling is a unique land of mountains, momos and pagodas- and this sentence does very little justice to the true diverse beauty this city really is.

Some places of attraction at Darjeeling are the Tiger hill, the mall, the peace pagoda, and obviously, the snow peaks of Kanchenjunga (you cannot obviously visit them though).

The town is also adorned by splendid waterfalls, horseback rides, cable cars, and numerous other things you possibly cannot find in any other spot of tourist attraction.

Just a simple walk down the meandering lanes of the city is a treat to all of one’s senses at once, together.

Furthermore, one early morning view out of the window on a lucky, non-clouded day can allow one to catch a fortunate glimpse of the snowy peak of the Kanchenjunga mountain (a part of the Himalayan range), which is certain to fill up one’s heart with aesthetic delight.

The mall is a unique place of scenic beauty and local gathering which is also a noteworthy British contribution.

The mall is lit up with bands playing, shops lined up featuring the local cuisines and attractions, horses offering rides (well, obviously not on their own), and the local communities strewn all over the place, illuminated with their cordial smile and ever approachable behaviour.

The sunrise at the Tiger Hill is surely one of the best sights one can ever view, and the delight it causes one makes quite up for the early morning toiling one has to go through in order to make in time to grab a spot at the sunrise spot, because this tourist destination is packed all-round the entire year.

Darjeeling is also the gateway to many other interesting and lesser known hill stations such as Mirik, and several places at Sikkim apart from the main attraction of that state- Gangtok.

Other interesting things to experience

One of the best things about my visit to Darjeeling was the chance to taste authentic Tibetan cuisine, which was nothing short of heaven for a food lover like me.

The different varieties of momos (steamed dumplings) served along with a spicy variant of special chutney and a steaming bowl of soup is a genuine treat one’s taste bud.

The authentic momos one can taste in Darjeeling is far better than the ordinary commonplace ones one can find in various fancy restaurants and the pocket pinch on such authentic momos are also relatively meagre.

Other palatable dishes like thukpas and kotheys are also pure delicacies.

The local handicrafts are also an intriguing thing to explore. They are sold all throughout the city in shops and on roadsides- jewelleries, show pieces, beadworks, and other intricate crafts made par excellence.

I have been to Darjeeling only once in my lifetime, but I hope it is the one of many more to come in the future. This trip opened my eyes to a lot of things, most importantly, the hidden beauty of an otherwise urbanely endowed state.

It is true that this beautiful town has been experiencing a lot of political turmoil and unrest over the last few years regarding the demand for the statehood for Gorkhaland.

This problem has hampered the tourism industry to a great extent, which is definitely a threat to the future of the city on a whole.

However, no external issue can stop Darjeeling from being the beauty which it truly is.

We shall now only hope that it is freed from all disturbances in the coming years and the West Bengal government works towards preserving the beauty and prosperity of Darjeeling, as it can develop as one of the best hill stations of India.

For all the reasons stated above, Darjeeling is of course my favourite hill station among all the hill stations I have visited, and I am pretty sure that it will be so, even in the coming days.