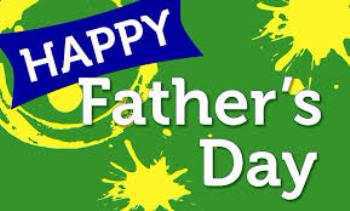 Good morning respected principal and teachers and all my dear friends. Today we have gathered here on the event of Father’s Day and on this I will be presenting my speech.

They are the main supporting pillars of a family. Sometimes father’s place is taken for granted. He is not given so much of importance as a mother. Still he doesn’t complain. He keeps on doing his duty without a hint of complaint. We are lucky enough to have a father. There are people who don’t have one.

How many of you might be thinking why do we celebrate Father’s Day on a particular day or why do you even celebrate? If you are indeed thinking so, my friends you have come to the right place. Just like everything else there is history here too, although not as boring as the one you study in your textbooks!

Now let me tell you all a bit of history about Father’s Day. Where is indeed a very interesting history behind how the day was formally recognized into a public holiday and day of remembrance and celebration and acknowledgement and appreciation.

The story dates back to the year 1909 when lady by the name of Sonora Smart Dodd was sitting in the church listening to the Mother’s Day ceremony. Before proceeding further let me tell you a bit about this woman. Sonora Smart Dodd was born to a service man who lost his life in the Civil War.

Her mother died while giving birth to her. It was her father who single handedly raised all his five children including her. Therefore, she wanted to celebrate and dedicate a day for acknowledging the effort and hardships that were taken by her father in order to raise them.

Accordingly, the next year on her father’s birthday which was on the 5th of June, she decided to celebrate Father’s Day. She went too far to writing a petition to declare this day of 5th June as a day to celebrate Father’s Day all over the city. The mayor of the city rightfully accepted it however that it was shifted Two Weeks further in order to accommodate time for making the necessary arrangements for the celebration.

Young girls gifted red flowers to their fathers in acknowledgement of the hardships that a father takes to raise their children and family.

Since then the rose flower has been adopted as the symbol of Father’s Day. It was not until the year 1966 when president Lyndon Johnson declared Father’s Day to be an officially recognized celebration. This fact was reinforced by president Nixon’s proclamation of declaring Father’s Day as a national holiday all over the world as well as in the United States.

Talking about famous personalities Dr. APJ Abdul Kalam also had a tough childhood, but his only inspiration was his father. As he writes in his own autobiography “wings of fire” he mentions that his father used to live on a strict routine but they never had deficiency of anything in their life.

I would like to conclude my speech by saying that, we all love our father’s. They make our everyday beautiful. Hence it is our duty to make their one day special. Love to our fathers shouldn’t be shown only on one day. It should be shown each and every day.

Hence everyday should be a new Father’s Day as well as a Mother’s Day. Parents are the most precious gift of god that have been given to us and it is our responsibility to add knowledge and appreciate them as well as the works they do for us and the sacrifices they make for us. It is only then that we can become a truly harmonious society which marches towards progress.