Essay on an Imaginary Fairyland for Children 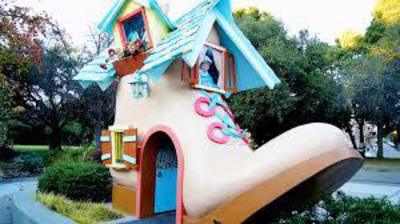 Ever imagined going to sleep in the night and landing up at a heavenly abode after waking up in the morning?

Ever imagined a place where everything is beautiful and serene, where everything seems to be exactly the way we want it to be, a place where there is fun unlimited, where one can always have fun and frolic , jump around , splash water here and there, throw tantrums, make mischief, does this have any connection with reality, not really.

One is left wondering where such a paradise exists on earth, and by chance it does exist, are we really that lucky to go and visit it at least once in our lifetime.

Well, children are blessed with a big bounty of imagination in their minds and that comes from hearing stories and making their own pictures in mind in their own creative frameworks.

Children and stories are quite synonymous and no child would have a childhood without having listened to at least a handful of stories, if not more.

Some stories teach morals to them, some others talk about developing into good personalities, and many others bring in animal characters which talk to each other to convey a particular message.

One thing common in all of them, to a very large extent is the factor of imagination. When a story writer composes a story, he uses his creative ideas to weave a good, interesting story to his tiny readers.

When a child listens to the same story, he tries to fit it according to his creative space and that’s where he begins to imagine things in different angles.

Talk of a simple story involving two children from a small village.

A child aptly listening to a story with this background may have never seen a village, but would have imagined far-fetched things, a village being a big place with trees, birds, flowers, fruits, animals etc.

What’s in Store there

So where exactly does the concept of a fairyland fit in here. Let’s explore the child’s imagination by going a step further.

Since the child is naïve and still new to harsh realities of life which are common to adults, whatever he imagines in his creative space will all look beautiful to him.

Tell him the story of a cruel lion and a mischievous mouse, the child sets a beautiful background for the story in his mind which will look pleasant in all its beauty.

This is only to say that, the child’s state of mind is reflected in his imagination because he still belongs to a very tender age group and thinks openly.

Counting on the inference drawn, we can say that whatever nice he imagines looks somewhat disconnected from reality, but more connected to an imaginative fairyland.

Going further, let’s explore what this imaginative fairyland has to offer us. Fairyland is no doubt, a land of fairies. Fairies on land, fairies in sky, fairies in water and just about everywhere.

So what are these fairies doing in this land would be the next obvious question.

Fairies are known to be the all- good creatures which are a favorite among children because whatever they do ultimately brings in happiness  to children.

A fairy tale is called so because it involves a fairy kind of character bringing out something good in the story.

Going a step further, let’s now imagine a beautiful fairyland out of our own creative powers. Let’s say we are going to visit that fairyland sometime, so let’s work on a making it our next place of visit, probably on a picnic to this land.

How would we ever reach there first of all. Probably a kind fairy is going to arrange that for us, or we can hop on to a flight to reach there.

Once we are there, let’s try to imagine the beautiful world around there. Captivating greenery everywhere, lush, serene landscapes filled with dense poppies and colorful tulips and roses creating a carpet of florals.

Twittering birds and chirping little creatures, cute animals and the amazing sounds they make, all seeming to be a heavenly paradise.

A land that is for children since everything there is made of innocence and has the essence of unconditional love between anything and everything.

Fresh dew drops sitting on moist leaves, giving a feel of freshness and rejuvenation, not found anywhere else. Striking through these captivating activities are a whole bunch of children adding beauty to the place.

Children are enjoying themselves in a pool of water, throwing and splashing at each other and not worrying about their clothes getting wet.

They are happy to push and pull each other in the mild sunlight, happy to gaze at the floral fields, happy to be running around from one place to another, making merry, jumping with joy, eating whatever they like to eat, screaming loudly, playing in the fields, getting wet in the rain, dirtying their hands in mud, etc.

But is anyone watching them when they are doing all this, somebody is, and those are the fairies.

The lovely creatures that have welcomed children and allowed them to be a part of their paradise are only waiting to see their land turn into a treasure of happiness.

This fascinating land has some very interesting tales to tell them. One can find a treasure trove of chocolates, cakes, pastries and all goodies at one big place.

Children can be seen enjoying their ice creams in day light and hanging around little pups, trying to feed them too.

A picnic to the nearby zoo mesmerizes them. The big waterfalls leaves their mouths wide open. They take seats in a fairy built cartoon vehicle that takes them around the beautiful place.

Children enjoy their favorite berries by plucking them from wherever they are seen.

Children learn to take care of their belongings and also share their things with others happily. A big, open space at the center of the paradise gives them opportunities to do whatever they wish to.

The Land of Fairies

People on this fairly land may be very good natured and children friendly. They love children and are by nature very gentle and courteous.

Their kind heart brings them close to nature and they share the warmth of giving and reciprocate happiness from within.

People are very down to earth on this paradise and children learn a lot from them. Not only do children spend time making merry and gather around to play and have fun, but also learn good qualities from this place.

They bring themselves close to nature and learn to respect mother earth for having provided such a beautiful, serene place to live in. They help little, tiny animals in finding food and learn to share and care.

Children imbibe goodness from the fairies. They learn to be good and do well. They learn to speak the truth always and to never be greedy about anything.

They learn to respect elders and speak politely.

They never forget to say prayers to god and know to eat only that which is healthy and keeps them in good shape. An open space like this one in a  fairyland gives children to think openly and create imaginative ideas within their minds.

Children are happy to dance around to the songs of nature, they identify themselves with the colors of the rainbow, they enjoy dancing in the rain and sing to the tunes of birds.

We could so wish that such a paradise truly existed, so that our children could spend at least some of their time learning to have fun and thinking differently.

All that children of today’s generation do is to become friendly with a bunch of devices and get totally involved with it.

The idea of going out and imagining something out of the box is slowly vanishing and would soon disappear if we don’t let children to think openly and create a nest of their own ideas.

Children should be allowed to improve on their creative instincts and create such a beautiful fairyland within themselves.

Share it and become a STAR:
Tags: Fairyland essay, Imagination