Essay on Ethics and Values (986 Words) 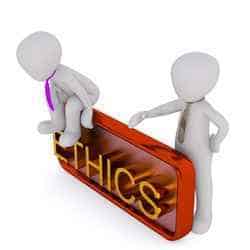 We all talk about an ethical lifestyle free of all sins. But do we understand the meaning of ethics and values. It is very easy to preach moral values to others but very difficult to adhere to yourself. A life led for yourself but a life led for others is always worth living. Ethics and values are what build our character from inside.

I know it’s difficult to live an ethical life. Especially when you are surrounded with negativity and dearth of love all around you. I know it is difficult to not combat negativity with negativity. But is it impossible? An eye for an eye is not what the world needs right now. It needs more of beautiful souls who are willing to help out people.

When a child is born, he is like wet mud – gullible, innocent and impressionable. If the children are groomed with a nurturing attitude and they are taught lessons of love, kindness and benevolence; they turn into loving individuals over time. But if they are abused at an early age, they are left with haunting memories of a horrible past.

Either they turn into cruel and indifferent individuals or caring and good people. It all depends on what they underwent at that age and how they take it. Schools should inculcate values in students.

The teachers should not just focus on studies but they should develop students’ brains and characters as well. It is the teachers only who act like mentors and guide students on the path of righteousness.

Society and parents also play a key role in a child’s upbringing. A mother is a child’s first teacher. A mother does everything in her power to groom him into a responsible being. Parents teach the children to differentiate between good and bad.

But the catch is; society is filled with both positive and negative elements. Children learn a lot from the environment. But society is a mixed bunch. There are some good as well as bad elements. But children are more influenced by bad elements because of their tender age, they need to be taught the difference between right and wrong or else the society will find a way to corrupt them.

These days, the newspaper is filled with news of all kinds of gruesome cruelties. People don’t flinch before murdering someone, kidnapping, raping a woman, robbing someone of their possessions and the list is never ending. This world is full of cruelties all around.

People have lost all their empathy and sympathy. It seems as if some devil has taken over their minds and controls all their actions. It is worrying to see the state people are in today. People have marched on the way to success. They have landed on moon but they do not know who lives next door to their houses. It seems as if all the beautiful things vanished from the face of earth.

When a crime is committed, the worst part is not the criminal but the eye-witness who saw the crime happening in front of his eyes but did nothing to stop it.

I don’t understand that does the guilt not eat them alive of seeing something bad happening and yet doing nothing to stop it. It is just cruel how the society has turned a cold shoulder to everything that does not afford them. Empathy and sympathy turn the world but what happens when we witness their dearth in our population.

In our aspirations, we keep on trying our best to climb the ladder of success but we do not hesitate to step onto someone else’s aspirations to fulfill ours. What is the reason that our jails are full and old age homes not enough to accommodate all the old ones out there on the streets.

Children have become indifferent to the needs of their own parents. Parents who give their everything to bring up children but children just spur them away in a flick of a second. They are running from their responsibilities. They don’t want to take care of their old parents.

I don’t know what the world has come to today. All of us walk on our own paths and we do not hesitate to wrong someone for our own benefits. Dearth of love prevails. And the twisted part is, the wrong rarely comes out in the open.

This Kalyug gives the opportunity to commit sins but not correct them. The rich and powerful cheat and fraud other people to earn money but they rarely get exposed. They live their lives in complete ease on the hard-earned money of other people.

Isn’t it hard wrenching to see the war in Syria. It has just destroyed the once happy country. The viral photo of a child washed ashore is trending on internet these days. Instead of unlimited likes, shares and comments; they need some help from the western powers. Countries like USA have turned a deaf ear to their requests.

Instead of helping them out, he has just banned immigrants from all countries. They all are our own brothers and sisters. They should be helped and not punished away. Terrorist attacks target countries and destroys their heart. It is gut wrenching to see the large-scale destruction. It instills fear in the minds of people and they are not able to live a happy and free life.

At the last, I would like to say that the condition of the world will deteriorate further if we don’t join hands to combat such anomalies. Always remember that love has the power to change any heart.

It is the dearth of values system which is root of all crimes and wrongdoings. As we say, it is always in the mind. If our youth is taught spiritualism instead of materialism, maybe they realize the love can take them to places and heights which hate can never afford. Don’t lust for money. Lust for excellence.