India is the second most populated country in the world, after China. New Delhi is the capital of India. The Central Government in New Delhi takes acre of the welfare and security of the people of India.

India is divided into 29 States and 7 Union Territories. The main offices of the State Governments are located in their respective capital cities.

A great variety of landforms is found in India. There are mountains, plains, rocky lands and sandy deserts. India also has many rivers, lakes and islands. 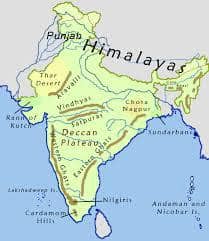 The mountain wall of the Himalayas stretches in the form of an arc from Kashmir in the west and narrows down to Arunachal Pradesh in the east.

Many rivers, like the Ganga, the Yamuna and the Brahmaputra have their sources in the Himalayas.  These rivers flow throughout the year, as they are fed by the melting snow of the Himalayas.

They are the Aravalli and Vindhya ranges in Central India. We have the Satpura range, the Western and Eastern Ghats.

To the south of the Himalayas are the plains of India. The Ganga, the Brahmaputra and the Yamuna rivers flow through these plains.  These plains are flat lands with fertile soil.

These plains are thickly populated.  Here the summers are hot and the winters cold.

A desert is an area covered with sand and rocks stones which receive very little rainfall.

The north-western part of India is a rocky and sandy desert called the Thar Desert or the Great Indian Desert.

The southern part of India is a Peninsula. (A peninsula is a piece of land surrounded by sea on the three sides.)

A plateau is a high land with a flat surface.  The central and southern part of India is a plateau called the Deccan Plateau. It lies between Ghats to the west and the Eastern Ghats to the east.

The clothes of our people differ from state to state. India being a very big country, there is a wide variety of clothes that our people wear.

The saree is the most common wear among India women. The style of wearing it differs from state to state. Other popular clothes for women are the salwar-kameez and the ghagra-choli with a dupatta or odhani.

Men in India usually wear trousers or jeans with shirts/T-shirts. Dhoti-kurta, kurta-pyjama or kurta-lungi is also worn in different states.

Boys/men do wear half pants/Bermudas with T-shirts/shirts

In India harvest festivals are too celebrated such as Pongal, Onam, Baisakhi.

As we know that India is divided into 29 states, there are several different languages such as Hindi, Bengali, Marathi, Telugu, Tamil, etc.