Elephant is the biggest of all the surviving terrestrial mammals on Earth. It can easily be spotted by its huge body size; whether in a zoo or in wild, we can easily find them. Elephant is a very popular animal and is liked and loved by one and all, especially children like them a lot.

Although it is a huge creature still it is very tender by nature, and can befriend us very easily. If we offer our unconditional love to them, they can prove to be friends for life. Like humans they are also very sensitive.

They express their feelings by way of different gestures; they greet us by lifting their trunk up, show their agreement or disagreement by way of swinging their big fan-like ears, and trumpeting in a high pitch.

Elephant, especially in Indian tradition has been considered a symbol of royalty. Since the ages of Rajas & Maharajas, elephant has been symbolizing wealth and riches. And because of this reason, they used to be decorated beautifully.

They have also been actively associated with the wars in ancient times. A soldier mounted on an elephant had an edge over others, as he was better placed to look over the battlefield. This would help him to follow a better strategy.

Despite being so giant in size it is strictly an herbivores animal. Although hard to believe, but it’s true. Elephant eat green leaves, fresh twigs (small and newly developed branches of a tree), wild fruits etc. A herd or group of elephants is called “PARADE”.

They are very playful while in water. They love eating bananas a lot. Elephant is also the “HERITAGE ANIMAL” of India, as declared by Government of India.

Evolution, Anatomy & Habit of the Elephant 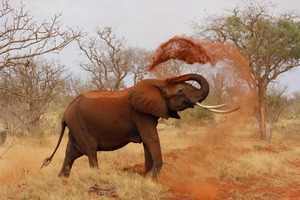 As mentioned above, elephants are giant mammals. They have four pillars like legs, a long trunk attached to their forehead, two giant teeth, called Tusk at both the sides of trunk, two big ears, and a short tail. The Tusks are special features of an elephant and therefore, it is also called as “TUSKER”.

The tusks of an elephant are Incisors only (corner teeth of the upper jaw) which have grown to become tusk, during the stages of evolution. Same is the case with trunk of the elephant.

Trunk is hollow from inside. According to scientists, nose and upper lip of the elephant got merged during evolutionary phases, to create this novel feature called “Trunk”.

This feature evolved out of the need to get food. And, to get food elephants have to tear down leaf-bunches and twigs, located high. This job needed a heighted physical feature.

And thereby, trunk got evolved. Elephants use their trunk to tear down leaves, fruits, twigs etc., fill water in it and pouring it into the mouth by coiling the trunk inside, carry loads, dig out water of mud, etc.

They have a tough and thick skin, generally 2-2.5 cm thick. But, despite being thick it’s very sensitive, and can get cracked if not smeared with mud, periodically. This is the reason elephants love to be surrounded by water and mud, which keeps them cool, and their skin hydrated.

Elephants can grow up to the height of 2.5 meters to 3.0 meters and weigh from 3,000 kg to 6,000 kg. Because of their heavy weight body size, they walk very slowly and for this reason, a person having slow pace is compared with slow walking speed of the elephant.

Presently there are two existing species of elephants.

African (bush) elephant is biggest of all the other surviving species of elephants and lives in the hottest climate of (sub-Saharan) Africa.

Elephants have very impressive memory when it comes to recalling the directions and routes they usually follow to get water and food. They can smell and sense the existence of water at a particular place from miles away!

Elephants follow a matriarchal family structure. The oldest surviving female member of the “PARADE” leads the group. She is the one who is responsible for safety of the “Parade” and searching water & food as well. Similar to human beings, elephants are also very social. They tend to keep good relations not only with the humans but with other “PARADES” also.

Coming to their habitat, they are found from grasslands of Savanna to the deserts to marshy lands of Asia and Southeast Asia. 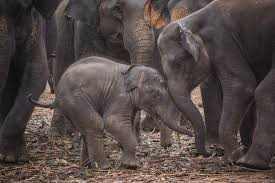 MYTHOLOGY: Elephant has been worshipped in the Hindu mythology, in the form of the elephant-headed god lord ‘Ganesha’. Elephants are also shown surrounding goddess ‘Lakshmi’.

CULTURE & TRADITION: They are the most prominent and impressive feature of the Mysore Dussehra festivities. Tourists come from faraway lands to watch their grandeur there. Elephants are also important part of other temple festivals in south India. And they remain lifelong at the temple premise only.

In cinemas also they have been ruling human hearts by their roles in the Rajesh Khanna- starrer “Hathi Mere Saathi” and recently released blockbuster movie  “BAHUBALI – THE CONCLUSION”.

ENTERTAINMENT: They have also been entertaining us for ages by their acrobatics in Circuses. Children enjoy having  fun when they get a chance to ride over an elephant and watching them in zoos.

Danger to their Survival

The biggest harm to the survival of elephants is posed by illegal hunting and poaching of them, mainly for their ivory tusks. Their tusks remain in high demand always. As it has manifold uses like, in preparing various traditional medicines, Jewellery, ornaments, and fashion accessories, and simply for home decoration purposes.

The second most important factor affecting their survival is habitat destruction, which leads to the third factor that is, human – animal conflict. Due to clearing of forests for agriculture or housing purposes, these animals are pushed to the edges of forests. There they have to encounter humans, which often leads to casualties for both.

And, because of this they sometimes get aggressive and offensive against us. This may result into ramming the standing crops down, hitting the individuals, sabotaging their dwellings etc.

Elephant has proved to be a good and kind companion to human being. It has a very special place whether it’s the environment, mythology or traditions. Considering these factors now it’s our turn to pay them back for their services and affection they have been giving us.

For this, first of all we must sensitize ourselves towards their needs. Then, ensuring their existence in natural, and encroachment-free habitat and thereby, minimizing human-animal conflicts.

And it’s really good to mention that commendable steps are being taken in these directions by the government and individuals both. Some of them are; notifying certain natural areas as “ELEPHANT RESERVES”; starting “PROJECT ELEPHANT” in the year 1992 to ensure their safe survival in the backdrop of widespread poaching activities. Further, declaring it as “Heritage animal” has given the elephant its due importance.

And, these efforts have been successful too in ensuring a healthy and stable population of this “Giant but Gentle” creature.