Man has developed from prehistoric ages from an ape like creature to what he is now. From fours he started walking on twos. From stooping on the ground he started to stand up on his legs. He learnt to walk run hunt and cook.

Before, man used to live on trees like apes. They had a huge head and a smaller brain. His senses weren’t that developed that time. His only means of survive was to eat the wild berries and fruits that grew on trees. He was a prey that time and not a predator, since he did not know any hunting skills. He was preyed on like other monkeys and apes. His body was full of hair and he had a tail also.

As time passed man came down from the trees to the land. He started residing in caves and niches in mountains. The hair quantity in his body reduced.

Then man developed tools. This brought a major change in his life. He learnt the art of hunting. He learnt how to make sharp object by rubbing two objects with each other. With tools now he could build temporary sheds and hunt animals at close proximity.

Another change that came with tools was that he started walking on twos instead of all fours. Yes! Man started using his lower limbs. But his walk wasn’t this upright and straight as it is now. It was more like how gorillas look when they walk on their feet; slightly humped in front and the movement is from side to side.

While rubbing two stones to sharpen them man made another accidental discovery that is fire. Till then fire was a matter of mystery, something fearful, and something unknown. Something, that cannot be under control. It was an act of nature. But when man learnt this new trick he could produce fire at his will by rubbing two stones or two twigs together. He became the master of fire.

The size of his brain increased considerably. He stood more upright. With fire at control there came many advantages. He could now have cooked food (before man used to devour raw flesh) hence it enhanced his taste buds. He can now light up dark caves and stay up late in the night. Also now they have this instrument to protect themselves from wild animals. They can also keep themselves warm in winters. From a herbivore he became an omnivore.

By this time he had learnt to tame animals. He started taming animals of domestic behavior. Man started living in groups. From a nomadic nature he started having a family. From a collection of different families it soon turned into a prehistoric village.

Man shifted from the caves to the open land. He built himself huts. Separate huts for separate families. Man learnt that the soil near the river is most fertile and there is also an easy availability of water. Villages started coming up along the banks of the water sources.

Man started producing food instead of just eating the wild fruits. The very first grains to be cultivated are still unknown because at that time trees also hadn’t undergone much evolution and there were a lot more different species of trees. So the main diet of man comprised of wild fruits, berries, meat, milk from the animals he domesticated and the grains that he grew.

He started practicing shifting agriculture that is suppose they settled in an area and cleared the forest cover there and started their agriculture there. But after some years the soil will lose its fertility, then again the people will shift to a new area, make a new clearing and start cultivating again, and leave the earlier patch to regenerate itself. 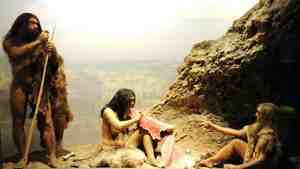 Man now became more human like. He brain size increased. His face shrinked. His back became straighter. And he could now stand upright on his hind limbs. He could walk, run, and jump on his legs without any hindrance. Also he lost the use of his tail, since he didn’t need to hang from trees anymore. Hence, his tail started shrinking in size. And finally, it will be lost like ours in near future.

Nothing much is known about the language of early man at those times. Scientists say they didn’t have a proper context or verbal sentences. Instead they had calls like animals. He used to communicate or call each other through specific set of music, shrieks, cries or calls. They had separate calls for expressing joy , sorrow or giving signals for any danger lurking nearby.

Man started using different materials for building his home- like straw, wood, mud, bamboo and wood. With the advent of fire and wood man made another discovery that changed the pace of time. He discovered metals. He discovered ores from which metals can be formed. The very first metal to be discovered was copper.

Man can now store food. Before he used to store milk in earthen pots or skins of animals hence the food got easily wasted. But with copper utensils now he can store food easily for days. Food production became super functional. Man started producing food more than he needed. This gave him the idea of trade. He traded his grains for cattle or new weapons and utensils.

Such is the journey of man. This by and by gave rise to huge and renowned civilizations which shaped our future-like the Mayans, the Egyptians, the Greeks, the Romans, the Indus valley and many more. What we are now is because of them

“For men may come, and men may go, but I go on forever” -the river