Essay on Dussehra for Children (899 Words) 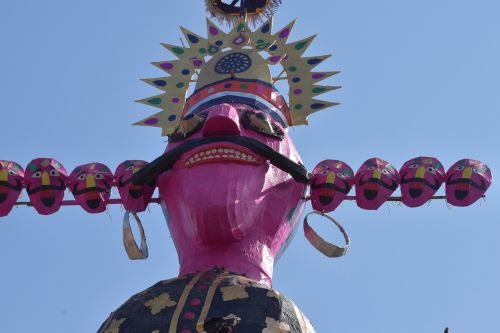 Navratri and the origin of Durga

Dussehra is the tenth and final day of Navratri, the ten-day long festival of worship of the female form of Shakti embodied by Goddess Durga whose name in Sanskrit means “the inaccessible”.

A monster called Mahishasur had terrorised the heavens. He was half-man and half-bull, a savage demon by birth. Neither Vishnu nor Shiva could defeat him.

They jointly invoked the power of Shakti was and Durga was created to defeat Mahishasur. She rode astride a ferocious on a lion and carried several weapons including a trident or trishul with which she finally killed Mahishasur and regained heaven for the Gods.

Since then she is venerated as a symbol of female power signifying the triumph of good over evil.

Even in the Vedas and Puranas, Durga has been mentioned as a deity who should be worshipped in her dual and complementary aspects of benediction and destruction. She is addressed by various names and revered in many forms.

She is the divine consort of Shiva and is worshipped across India throughout Navratri celebrated differently in different states.

Dussehra and its significance in the Ramayana

In the Ramayana it is described how Rama’s wife Sita was abducted by Ravana the demon-king of Lanka.

He has been so enamoured of Sita’s beauty that he deceitfully disguised himself as a hermit seeking alms and when she emerged from the cottage to give him food and charity, he abducted her.

To protect her honour and regain her to safety, Rama had fought him Great War.

In the last ten days of fighting he had performed Chandi Puja to invoke Goddess Durga and seek her aid in defeating Ravana who had ten heads and seemed invincible.

The moment one head was cut off another grew in its place. Goddess Durga had given Ram the Brahmastra or divine weapon with which to defeat Ravana and on the tenth day of the war, Rama had emerged victorious.

This day is called Dussehra or Vijayadashami meaning the victorious tenth day. It is a signifier of the triumph of good over evil.

In Hindu mythology this is also celebrated as the day Goddess Durga vanquished the demon Mahishasura.

Dussehra is celebrated differently in different parts of the country. In the northern part of India it is usually celebrated with song, dance, drama and pageantry as the “Ramleela” continues.

These are drama forms where various episodes of the Ramayana and are enacted in different localities of towns, villages and cities. Huge effigies of Ravana are erected and filled with fireworks.

These effigies are life-size and are shot at with fiery arrows after which the fireworks explode and Ravana is burnt. The burning of Ravana symbolises the eradication of evil from society.

In western India Dussehra is celebrated in Gujarat with great pomp and splendour after a nine day long festival of dance called “garba” and “dandiya.”

These dance programmes and devotional music programmes carry on till late at night and till the early hours of the morning.

The tenth day of the festival culminates with the immersion of the deity and final prayers. This is an immense socio-cultural phenomenon recognised internationally.

In eastern India, especially in West Bengal Dussehra is celebrated as the last day of Durga Puja or Durgotsava in which the female power of the universal mother Goddess Durga is venerated.

Goddess Durga is welcomed on her visit to earth which is her paternal home for ten days of Durga Puja after which she is sent back amid pomp and glory to reunite with her husband Shiva.

This is done through “visarjan” or “immersion”. On the day of Dussehra which is called “Dashami” or “Vijayadashami” women pray and then apply vermilion or “sindoor” to the goddess and then to each other as the goddess is sent for immersion. This final spectacle is called “sindoor khela”.

In Southern India all three female goddesses are worshipped, Durga Laxmi and Saraswati, and they are venerated with lights, lamps, flowers and offerings on the day of Dussehra which culminates after nine days of worship of the female forms of strength, knowledge and prosperity.

Dussehra involves a lot of spectacle and pageant in South India with dance, pageantry and special food prepared for the offerings to the goddesses.

Dussehra is important for various reasons. First it is the culmination of the holy festival of Navratri. Second, it is the beginning of the preparations to Diwali.

In the Ramayana Diwali is the day on which Rama, Lakshmana and Sita completed their exile and returned home to Ayodhya.

Thus Dussehra signifies an end and leads us to Diwali which signifies a new beginning and many regions celebrate this as a new year, financial and personal. Dussehra is a national occasion of secular bonding.

It spreads the message of goodness and universal brotherhood. It reaffirms our faith in divine power. Nearly all working professionals get a week’s vacation and thus enjoy the festival either in their city or out of it.

Dussehra is the best time of the year to enjoy festival offers, engage in cultural activities and explore the country to get a taste of its unity in diversity.