Festivals are very important in our life. They are special or religious occasions in our life. Every religion celebrates many festivals.

No matter how many festivals the different religions celebrate, all of them are celebrated with the same joy, happiness and enthusiasm.

It is due to these different festivals that are celebrated all over the world that we come to know about the roots and cultures of the different religions.

There are so many festivals celebrated all over the world. Sometimes it is like we are knowing about that festival for the first time.

Festivals bring people together and also bring happiness among everyone.

Many families stay apart because of higher studies or due to their job. It is during these festivals that everyone goes back and celebrate the festival together.

Festivals are like a reunion for them. There is some sort of history and story behind the celebration of every festival.

When we celebrate the festivals, we come to know about the history and story due to which the festival is celebrated at the present day. 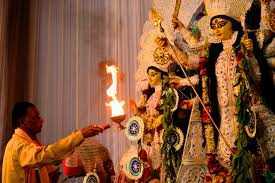 Durga Puja is celebrated during the Kartik or Ashwin month which falls in the month of September or October according to the Hindu calendar.

The celebration of this festival is for ten days and each day has its own significance.

During these ten days the Hindus fast and perform many rituals and ceremonies. On each day they remember Mother Goddess and honour her.

The festival of Durga Puja is entirely in honour of Mother Goddess. The Mother Goddess is known by different names like Durga, Parvati, Amba, Gauri etc.

The ten days of celebration starts with Navratri and Mahalaya. This is the first day and people fast on Navratri. The celebration ends on the tenth day which is called as Vijayadashami or Dusshera.

This festival is celebrated all over India but it is known by different names. In the north, people fast for nine days which is known as Navratri.

On the tenth day, after nine days of fasting there is celebration. While in the west, people mostly celebrate by dancing in a special way.

This dance is performed by keeping an object of worship in the middle and then the people dance around it. For the people who reside in the southern part of India, this festival is all about fan fare for them.

In the east, Durga Puja is the biggest festival for them.

From the seventh day which is called Saptami till the tenth day which is known as Vijayadashami, they celebrate the festival with excitement and utmost happiness. For them the last four days of Durga Puja is very important.

On the tenth day which is the last day of the festival, people celebrate this day to remember the victory of good over evil.

On the last day of the festival people burn the effigy of Ravana to celebrate his defeat and death.  While in the north, there is Ramlila in which people perform to depict Rama’s life.

The Eighth Day of Durga Puja

The eighth day of Durga Puja, that is, Ashtami is on the eighth day of Navratri. It is similar. This day is most important compared to other days because this day symbolizes the win of good over evil.

On this day the evil Mahishasur was killed by Goddess Durga. On the day of Ashtami, the day begins with Shodashopachar and Mahasnan Puja. On this day, nine small pots are kept and people perform some rituals.

The nine small pots are kept to depict the nine Shaktis of Goddess Durga that is believed to be present inside these small pots. In this ritual Goddess Durga’s nine forms are worshipped.

Another puja which is performed on this day is where the unmarried young girls are referred and treated as Goddess Durga. Then, these young unmarried girls are worshipped in Kumari puja.

This puja is done on the eighth day for some while for others it is done on all the nine days of this festival. This puja is also known as kanya puja or kanjak puja.

In this puja nine girls are called at the house and are welcomed. After that their feet is washed and a red thread is tied on their wrists.

All these rituals are done by making the nine girls sit in a proper line. After this they are given bhog. This bhog includes halwa, chole and puri.

Apart from this they are also given some gifts which includes clothes, hair clips and pencil boxes. Usually these nine girls are the ones who have not yet experienced puberty, are seen as incarnation of Goddess Durga.

In the evening there is another puja. This puja is a grand one and people perform it with joy, happiness and enthusiasm.

This evening puja is known as the sandhi puja. People perform this puja in the sandhi time which is regarded as a fortunate and auspicious time.

This time is believed to be very important for the eighth day and this is the reason why this puja is performed with much excitement and enthusiasm.

People keep around hundred and eight earthen lamps for this puja and they light them at the Sandhi time. This has been a custom to ask for the blessings of Mother Goddess.

On the day of Ashtami many puja pandals make a special bhog for Ashtami. They serve the people this special bhog.

While different food items are kept in front of the Goddess as a bhog. This food items include roshogolla, khichdi, payesh, chutney and papad.

Myths and history of Durga Ashtami

The eighth day of Durga Puja, that is, Durga Ashtami is celebrated to remember the victory of Goddess Durga over Mahishasur.

He was an evil demon. It is believed that Lord Brahma had given a boon that only a female warrior could kill the evil demon, Mahishasur.

He would not die if someone else killed him. During the battle when Lord Indra was defeated, then Shiva, Brahma and Vishnu who are known as the holy trinity made Durga.

The energy and power of different male Gods was put inside the body of Durga. Her each body part had that power and energy.

It is said that it was on this day that she created weapons and got the masculine strength and killed Mahishasur with the trident.

During this festival shows and remind the people what power and status women had in the history of India. There are many myths attached to this festival.

People sacrifice the animals by performing puja at the temple in order to remember the occasion.

This animal sacrifice takes place is Assam, Orissa and West Bengal. People have been following the custom of worshipping nine girls on this day, give them food, gifts and new clothes.

People perform many different pujas on this day out of which worshipping the nine girls is very significant. This day is considered important as it was on this day that Goddess Durga killed the evil demon Mahishasur with her trident.

This teaches us that no matter how much evil try to defeat the good, ultimately it is the evil that lose and the good will gain victory over evil.

This day is also important because people perform Astra Puja on this day. This puja is performed to worship the weapons of Goddess Durga.

The evil demon, Mahishasur had other demons as well. So in order to kill those demons, Goddess Kali had appeared from the forehead of Goddess Durga.

This day is also important because it is believed that the day of ashtami is significant for investments or for purchases gold, silver and other important things on this day.

It is said that this day is considered to be fortunate for new investment and a new beginning to bring joy and happiness among everyone.