Essay on My Dream City Delhi 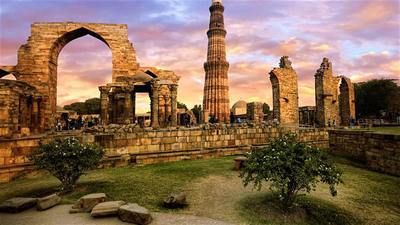 Delhi is not just a city, it’s a history in itself. That history, which doesn’t need assistance in telling its story. From the red brick walls of colleges to the smell of freshly cooked food in chandani chowk, Delhi has seen it all. It has allowed the great Mughal emperor to reign over it and at the same time, seen that very emperor bound in chains of helplessness.

From times of royalty to democracy, it has developed a lot. Changed to that extend that someone coming back to Delhi after years would not have recognized it, had it not been for those traffic jams, those loitering chaiwalas at the roadside in chilly winter mornings.

That was a very philosophical take on Delhi but let’s look at the city from various perspectives and then we will realize why is it really a ‘favourite city’. Digging old times proves that Delhi has been very welcoming towards all. It had the Mughal’s at first, from there the British and finally our various governments.

We have seen the elitist to the most ‘aam aadmi’ of all, to take charge of the city. It is the root of the functioning of our nation and has many secrets hidden in its shell, which we will never know perhaps.

Looking at the cultural aspect of it, we are not only considering the Indian cultural habits but also the ones beyond our borders. We are in the hub of embassies and cultural centres, where different courses, on some foreign language, are always taken up by universities and colleges.

Functions and campaigns are run to support causes of people and organisations across different cultures. A city where ‘Korean Cultural Centre’ doesn’t feel the need to specify its identity as being affiliated to South Korea or North Korea. It’s the intermingling of culture which gives Delhi, the accommodative nature that it has.

Well politics as a sphere does not need any mention here cause we all know that Delhi is the centre for political seats and decisions. It is the reason why Advani never got to lead and was always lead. The city which saw a moot Manmohan Singh on Prime Minister’s seat but a very active side of him in economics.

It is that very city where Kiren Rijiju says in morning that China’s moves on Arunachal does not bother India and by evening we have the foreign affairs ministry fixing a meeting of Modi with Xi Jinping. There are a lot of twists in politics but that is precisely where Delhi gets its flavour from.

Student politics has come a long way. From merely forming students’ unions and working to rectify campus problems, to fighting for Najeeb’s rights and trying to give justice to his parents. We have respected universities like The Delhi University, Jawaharlal Nehru University and Indian Institute of Technology, which are constantly imparting education and values in the youth.

There is a large share of youth residing in Delhi for educational purposes and this share is constantly exposed to the mishaps in the world. Their perspectives and cognitive capacities are broadened by the educationists in the city.

Sociologically speaking, Delhi has a vibrant crowd which has always supported human rights cases. From Nirbhaya candle march to Rohit Vemula’s suicide case, this city has stood up for the rights of the meekest (thanks to our society for defining the meek).

There are a lot of NGOs actively engaged in filing PIL’s on behalf of the ones, who do not have adequate resources/ knowledge to do so.

This city is much more than the central government’s green city project. It has the fresh look of Amaltaas trees on both sides of Amrita Shergill Marg. It has witnessed the renaming of roads from ‘Aurangzeb Road’ to ‘Dr. APJ Abdul Kalam Road’. This is not what it seems to be.

These have deeper roots than just what we are being made to see. These are ways of establishing the Hindutva project in the core of India and normalising it in people’s lives. This is politicisation of the infrastructure of Delhi.

Another very striking feature about Delhi is how it changes completely in a few kilometres. If we move from Defence Colony to Nehru Nagar (a lesser known place in Delhi), its merely a distance of 1.5-2 kilometres but the drastic change is not hidden from anyone’s view.

From bungalows to one room houses, from 24*7 supply of water, to water availability only for 5-6 hours. There is so much that pockets of this city contain in themselves. There is a whole different Delhi than what we know. It’s never enough to know this city because it is equally familiar as it is foreign.

Considering my special interest in food and travel, I would like to mention that Chole bhature are really a delicacy of this city and cannot be found anywhere else in the same taste. It’s a dish that isn’t really Punjabi, as many people presume, but is definitely a Delhite’s choice when the stomach growls. Lately there has also been a growing culture of cafes as the most popular food joints, with a range of cafes being located in Satya Niketan and Cyber Hub in Gurugram.

This city has a flavour of different states of India, in itself. We can find a mini Bengal in Chittranjan Park, which is nothing less than a world in itself during Durga Puja celebrations. There is a mini Afghanistan in Lajpat Nagar, which not many know about.

We can get flavours of military discipline from Defence Colony and at the same time, cheerful faces of students in North Campus area. The development of DMRC metro line to further parts of Delhi has resulted in well-connected city, which caters to the demands of all age and professional groups.

This is what Delhi offered me in my three years. Words can only give views on the city but you can live it by being there.