Dolphins are the most beautiful, graceful and majestic creature to come across. Their beauty and grace is unparalleled. There is no animal that can even be compared to them. Long slender bodies and a very friendly attitude; especially towards humans makes them most likeable among all.

They are simply a magnificent sight to behold. They are super intelligent and playful. Dolphin are mammals i.e. they can survive both in water and in land. They spend most of their lives in water only but they are not fishes.

Dolphin do not have a respiratory system like that of fish which can breathe oxygen from water. But dolphins need to come up to the surface to catch their breath.

Dolphins are of various kinds. They are a diverse group of mammals. The most famous of all dolphins is the killer whale and it is the most humongous of all dolphins. It has a length of about 31 feet and weighs about 10 tons. Their huge size makes them an easy predator. 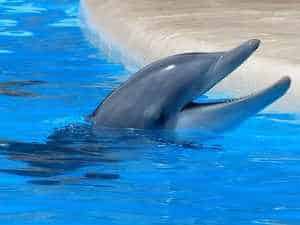 While the Mauli’s dolphin is one of the smallest dolphins out there, it is about 5 feet 6 inches long and weighs about 50 kg. Even the bottlenose dolphins are very famous for the peculiar shape of their nose. The largest dolphin is the killer whale which records an average height of about 23 feet and can weigh a little over 4 tons.

While the smallest dolphin is the Heaviside’s dolphin which has an average height of just about 3 feet and weighs 90 pounds. The jaws of dolphins  have on an average of 100 teeth.

These teeth are sharp but they are not meant for chewing. They are only meant for catching the prey because they swallow their prey as a whole. On the top of their head, is a blowhole which is used for inhaling and exhaling oxygen. They use it for breathing.

How do they live?

Dolphins are social creatures. They are not lonesome. Their attributes are not of a lone wolf but of a family. They live together and travel together almost their entire life. They travel together in large swarms called pods. Each pod has different characteristics and feature unique to the particular pod.

Some pods keep on travelling and migrating around the complete globes. But some pods stay in their place and claim their territory. Dolphins like Killer whales lives in pods of about 5-80 whales.

Sometimes, some pods amalgamate to form giant pods. These pods can have as many as 1000 dolphins. This is why it is such a diligent to see the dolphin’s tactics and antics. They are graceful and coordinated with theirs pods.

What do they eat?

For their foods, dolphins savor other smaller fish. But their meals are in variety and they are not just limited to fishes. The foods of dolphins vary for each species. Some dolphins consume fishes while the others eat creatures like squids. Large mammals like killer whale prey on big and strong creatures like sea lions or seals.

Dolphins hunt together in pods using techniques like hunting wherein the dolphins surround the prey from all sides and hold them captive. Then these dolphins take turns to prey on the captured for filling their hunger.

Activities they indulge in frequently

Dolphins are majestic when it comes to acrobatics or gymnastics. It is just breathtaking to see them up in the air and spin. They are avid lovers of jumping around and playing. Sometimes, dolphins are seen performing tricks with their pods. They form beautiful patterns that leave the viewers mesmerized with their traits and antics.

They are very trainable and are friendly towards human beings also. This is why they are placed in Marine worlds for entertaining humans. Sometimes, they have been seen riding the waves of the sea. It is actually very delightful to see them riding the waves like a boss.

They communicate with other dolphins using some chirping, whistling and smacking sounds. But the humans have still not been able to decipher their language of communication and according to me, but will never be able to also.

Dolphins have incredulous eyesight and hearing power. This is why they are very aware of their surroundings. Also, their excellent senses make it hard for predators like humans to catch them easily. They use the technique of echolocation to hear underwater.

Echolocation is similar to sonar. In this technique, the dolphins emit a sound and then cheerfully analyze their echo. The most fascinating point of using this technique is that they can almost hear as good as seeing the obstacle. It helps them to navigate freely underwater without any potential threats lurking and threatening their existence.

Also, when vision comes of no use in dark or cloudy water; they can always rely on their hearing to catch their prey for the food they require to function.

How do they sleep? Dolphins have a way of sleeping. You must have wondered that they are mammals so they can most probably sleep on land but the truth is that dolphins can only survive on land but they cannot practically live on it. But if they slap in water, how do they do it without drowning? So, the answer if that at a point of time, only half of their brain sleeps.

When one part of the brain is asleep, the other part is active enough to keep the dolphin on an alert even when it is resting. When dolphins sleep, they generally float on the surface of the water gently or they swim lightly to the surface every now and then to catch their breath.

Dolphins are very fascinating creatures and there is a lot one can intrigue over when wondering about dolphin. They are mammals. Hence, the dolphin nurses their kids with their milk in the early stages so that the calf is healthy and strong.

Dolphins are intelligent individuals who are capable of understanding and processing complex commands successfully. Many species of dolphins are protected to avoid their endangerment or extinction.