Essay on Diamond – The Most Prestigious Gem 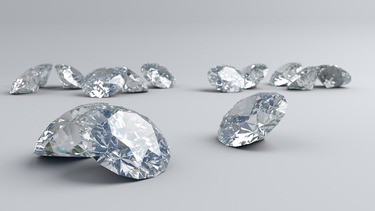 Diamond is known as the king of jewels in the world and this mineral is known for its prestige since the ancient times and therefore, is a rare gemstone to be found in this world.

The word “diamond” is derived from the Greek word “adámas” which means unbreakable and unconquerable in nature.

Diamond is a mineral of carbon which is found in the Earth’s crust. Carbon has two natural minerals that are found in the earth’s crust naturally which are Diamond and Graphite.

Though, diamond and graphite are the minerals of the same element, they are very much opposite in their physical and chemical characteristics and features.

Diamond is a crystalline mineral of carbon whereas graphite is an amorphous form of carbon. This also indicates that the structure of diamond is very different from that of the graphite’s structure.

Diamond has a tetrahedral structure that means, the Carbon atoms are arranged in a tetrahedral format which is uniform all over the structure of diamond and therefore, forms a three-dimensional (3D) structure.

This structural arrangement is what gives the diamond a unique hardness, resistance to compression, strength and extensive durability which entirely support its characteristic feature as the unconquerable gemstone.

All these structural arrangements of diamond are very different from that of graphite ass graphite consists of a hexagonal arrangement of the Carbon atoms with other which leads to the formation of a horizontal hexagonal formation.

This formation makes a weaker structure of graphite which is not at all as strong as the diamond structure. The uses of diamond and graphite are also very opposite as graphite is used as a lubricant and in pencils because of its amorphous nature.

Whereas the uses of diamond are the greatest in the Jewelry making industry and this is also due to the fact that it is very hard and is compression resistant along with being uniform in structure.

Such are the characteristic differences between graphite and diamond thus, making them entirely opposite from each other.

The use of diamond as a precious gemstone is known since the era of BC (Before Christ). The earliest use of diamonds was for the purpose of jewelry making and also to cut other metals due to its hardness, also due to the refractive index of diamond, it was highly used.

The earliest diamonds are said to be found in India and therefore, a lot of trade activities were carried out for the transport of diamond from one region to another.

Along with the use of diamond as ornaments, it was also used in the superstitious rituals, for example, it was believed that diamonds keep away the evil from their homes. Therefore, this was also a popular way of how diamonds were used or kept in their homes to ward off the evils.

Slowly, the mines in India and other well-known regions of Asia were depleted due to over mining for diamonds. Therefore, this moved the attention of the diamond-seekers to search in other parts of the world.

This is when the other diamond mines, that is in Africa were discovered and then in today’s date, Jwaneng in Botswana and the Argyle Diamond mine in Australia are the highest producers of Diamond according to weight all over the world.

The formation of diamond mostly happens in the Earth’s mantle and is mostly affected due to the magma. It is believed that the magma dissolves all the carbon in the surrounding region and this carbon is then crystallized in the magma chamber.

In India, diamond mines are mostly found in central India where there is the presence of alluvial soil which is the most preferable site for presence of Diamond.

Another major site of Diamond mines is in the Majhgawan mine located near the Panna city which is located in the state of Madhya Pradesh. Also, there are some small scale mines found in Hirakud mines which are in Sambalpur District of Odisha.

Other uses of Diamonds

Diamonds are very well known for their use as an ornament in combination with other elements, mainly gold and platinum. Diamond are mostly colourless that is the pure diamond will be colourless and transparent.

There are some diamonds which have certain colours or little shady die to the presence of certain impurities that is other particles which give that diamond a specific colour.

There are a few colours of diamonds which have been observed which include, yellow, brown, grey, also sometimes it can be black, green, blue, etc. also.

Diamond is chemically very stable therefore, has a huge option where it can be used. Diamonds are poor conductors of electricity that is very much useful for its use in semiconductors.

Diamonds are also used to cut other metals in the manufacturing industry and therefore, this is the major use of Diamond in the industrial field. Diamond is used in diamond-drill, also in diamond tipped tools and in cutting hard rubbers, Bakelite, etc. along with other metals.

Along with the hardness of diamond, the property of high refractive index of diamond it has a very high economic value in the industry.