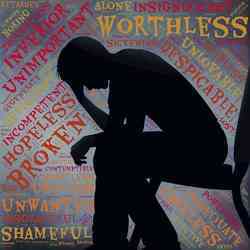 Depression is not a state of sadness or anxiety but depression is the name of that lonely fiend which continues to ravage all lives at 2 AM and 2 PM. There is no caving in from depression.

You cannot hide. People may ask you to get up and help those battling depression but believe me in most of the cases you do not even come to know about who is being pursued by such kind of irrational and dangerous self destructive tendencies.

Who may be a victim of depression?

Even that girl sitting beside you who were just laughing her ass off may be totally broken on the inside but you never know. Maybe that boy with the most charming sinful smile have his heart in shatters and is crying on the inside but does not have the guts to tell someone about his state because he does not trusts anybody enough to understand his state of mind.

Being a victim myself I empathize from the bottom of my heart with all the victims. Because for us self harm becomes a way of being happy amongst so much loneliness- we feel blade is a better friend of ours than anybody else. Just today I see a post on my best friend’s timeline about ‘battling depression together’ but can I open up to him? No. Can I apprise him of my wrongdoings? No. Because I am scared.

Scared why? Fear of being shunned by everyone. Fear of being mocked. Fear of not being understood by anyone. Reaching out to someone battling this inner state needs a lot of courage because we as individuals shun people out as we fear that we may take you down as well and this generally happens.

Have you ever realized how hard is it to fight with oneself in a constant bid to find our own lost soul which has wandered off in some faraway lands. No you don’t realize this. It’s hard. It’s freaking hard – the realization that we have sunk so low so as to take pleasure in self harm destructs a person from inside and breaks them to the point of meltdown.

Moreover the guilt of having destroyed a life which tried to save us from ourselves always looms large on our heads. Depression can off course be battled but an understanding of what drives us over the edge enough to harm ourselves is the paramount of all aid that a depressed soul can ever receive from anyone.

How does depression affect the person?

Depression numbs the person from inside and leaves him in a helpless state. The person becomes so reckless over a period of time that he refuses to acknowledge the puzzled state he lives in.

Depression can occur in many forms, many of which are unknown to the world out there. It may not be necessary that the person displays the symptoms of depression. But many a times, people tend to bury this depressed feeling in their hearts. This eventually eats them up and they forget to live life as it was.

How can it be treated?

Depression can be tackled with the help of doctors and psychiatrists. Tagging depressed as mentally unstable is wrong. Depression needs treatment just like all other diseases do. Battling depression requires a lot of patience by the loved ones of the sufferers.

Pills can only lull a person to sleep and quieten their demons for a short period of time. But proper discussion and talking to the victim can do great wonders in long run. Instead of blocking out their emotions, they should be taught to face and accept their feelings.

The condition of depression is dealt as a taboo and no person makes a clear move to understand the emotional dilemma of the one’s suffering from this disease.

The society shuns them out and tags them as abnormal. Instead, if they treat them affectionately as their own, the victims can be brought back to normalcy in no time. Society’s cooperation in the treatment of the depressed will go a long way in helping the victims gain their lost identity back.

It is also seen that a happier nation is more productive in their output. Their economy flourishes without any leaps and bounds. Happy citizens march towards development in a faster fashion than stressed citizens.

The nation’s betterment lies in the happiness of its citizens. Without its citizens, a nation’s resources are of no use. Depression weakens the backbone of a nation. A happy nation builds the hopes of a happy tomorrow.

Depression is also linked with self harm as well. Not all depressed souls necessarily possess self harm tendencies but many of them do. Depressed souls are reaching out for help. Their hearts are screaming to be heard by someone. Yet their voices go unnoticed in this crowd of multiple voices.

Our shallow and materialistic lifestyle snatches from us the ability to express without being judged. Instead people who open up and embrace this fight are judged as crybabies and emotionally dependent.

Mind you! We are not weak! We are strong! We keep the power to embrace our flaws and scars to heal our soul of all apathy and anxiety but it’s just that we have not been able to tap this energy in a successful manner.

This energy still remains somewhat hidden in the deep recesses of our heart awaiting exploration. My dear energy! Someday I will find a path in my heart that leads me to you and I will come down there to take you from your abode where you rest relentlessly to find my salvation.

To My dear friend reading this! That will be the day I empower myself with freedom and a normal life to begin with but till then I have no choice but to submit to depression.

Because depression is not a choice I get to make but a hard truth which defines my very existence. It is an upsurge of void feelings which forces me to act in a certain manner because sometimes even love and patience can’t save someone from the lure of their own self destruction.