Since the ancient Greeks the son of Adam, has been engaged in the practice of worshiping plants, trees, and agriculture.

Cronus was the goddess grain, agriculture harvest, which symbolized growth and nourishment. Of such importance has trees and natural vegetation been to us.

That time man and nature had developed a very blissful partnership. Every year man worshiped nature and in turn nature served them with good harvest.

But as the population growth began and the demand superseded the supply, coupled with man’s new found technological skills, began a new era of urbanization but what was overlooked was that it was built on the carcass of our mother nature.

Vast stretches of agricultural land were cultivated again and again, and once it was harvested and the soil lost its fertilizing capacity, those fields were burnt down and cleared, and they moved on to the next fertile land to prey upon. This was the origin of early deforestation.

With the advent of population boom, demands started increasing exponentially and the pressure on land increased, men turned to forest lands to cater to increased space and food requirements.

Following this process, coming to modern times we find the same tradition repeating but in a much more devastating scale so much so that the future generations will have almost nothing left in their share. 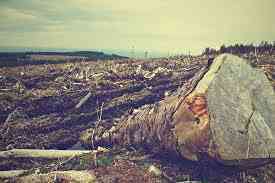 Google defines it as “a clearance or clearing of a forest or stand of trees where land is there after used for non-agricultural use”.

In other words when a man chops down or takes away the life of a tree for his own selfish needs that process is called deforestation.

At the rate of 2.3 meters for every degree Celsius increase in temperature which might bring floods to the whole world and humanity might submerge in its own blue trap

The major causes of deforestation are

The virginal forests are extremely lucrative to encroachers. The timber wealth provides a ready and tempting reward and so these ‘mafias’ continue their ill-gotten operations.

At this time, about half of the world’s forests have been cleared and it contributes to about 12% of global CO2 growth in the atmosphere. One survey even suggests that about 36 football field’s worth of tree cover is lost every minute.

Various steps can be taken to combat deforestation while we still have time, better late than never.

Even legislative steps have been taken by the Government in the form of Indian Forests Act 1927, National Forest Policy 1988 and various initiatives like the Van Mahotsava started in 1950 to promote afforestation.

Countries like China have adopted innovative ways to counter deforestation. A law promulgated in China in 1981 requires every school student above the age of eleven to plant at least one tree per year.

Due to this China had recorded the highest rate of afforestation than any country or region of the world, with 47,000 sq. of forest cover in the year 2008.

Even the general laws of physics says that “to every action there is always an equal and opposite reaction” in the same way if human kind continues to eradicate trees from the face of the earth thoughtlessly there will be a time when mother nature will strike back, and it will be done at the expense of human population wiped off to extinction.

Creating a future that will be nothing but anapocalypse. perhaps it is rightly said “the best time to plant a tree was 20 years ago; the next best time is today”. Steps that are of most drastic nature is the need of the hour.