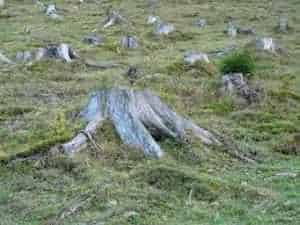 Deforestation, in its literal sense, stands for cutting down trees and clearing forests on a large scale, mostly (but not exclusively) for industrial purposes. The purposes, however, shall be categorised only under commercial causes- farming, habitation, development of industries, grazing ground for cattle, and many such others.

Deforestation can be carried on an individual basis as well as a larger basis, usually done by groups, and at times, facilitated by the government for building of reservoirs, setting up new factories, etc. Like most environmental problems, deforestation is not an isolated incident.

It is interlinked with many other phenomenon’s, which can be both its causes and effects. Such phenomena include flooding, forest fire, and various other natural calamities. Overall, deforestation is a serious cause of concern for environmentalists all over the world, and efforts need to be necessitated in every nation in order to effectively deal with, and curb this serious problem.

Deforestation in the Indian context

Every country should ideally have 33% of forest cover, which is, one-third (approximately) of the country’s land cover shall be classified under forest area. India presently falls way behind this mark (approximately by 8%). Deforestation in Indian context is recorded to be traced back to the nineteenth century, when the British colonisers started to cut down trees in large numbers to clear areas for different purposes.

In 1806, the first forest conservator has been noted to be appointed. However, this practice has certain examples even in the earlier, ancient prehistoric societies, especially when people began to settle down after changing their lifestyle from hunter-gatherers to pastoral farmers.

Even in the recent times, deforestation is constantly on the rise, simultaneously with the rise of urbanisation and industrialisation, which can also be cited as the two major modern causes of this practice, because along with the increasing urban population and their increasing demands- more and more industries need to set up, for which plants are being cut down and forest cover is being cleared.

It is a basic knowledge that we survive because of the oxygen provided to us by the trees. Trees take in carbon dioxide and give us oxygen in return, which facilitates respiration of all creatures. Other than this primary reason, trees provide us with almost uncountable important resources- wood, flowers, edible items such as fruits and vegetables, fodder for animals, medicinal herbs, rubber, and many more.

Therefore, a life without trees or any kind of plants is practically unpredictable and also impossible, because the benefits they provide are not many in number, but also great in their indispensability. Besides this, deforestation also causes adverse effects to a large number of wild creatures, birds, insects, etc. by uprooting them from their natural habitat.

Not many such creatures can suit themselves in an environment which is different from what they are used to, and are therefore facing several habitational problems, including endangerment.

Due to deforestation, many rare bird species are today battling with extinction all over the world, as it is obvious that such sensitive creatures require a special weather and climatic conditions to sustain, which can probably be never artificially replaced or substituted.

We already know the major cause of deforestation– which is cutting down of trees in excess. It is true that we cannot possibly sustain without cutting down any trees at all, therefore trees are bound to be cut down to a certain extent even in areas which maintain a high percentage of forest cover.

Only when trees are cut down more than required, deforestation occurs. Other reasons of deforestation, as stated earlier, are urbanisation, industrialisation, and overpopulation (can also be referred to as population explosion, especially in the case of India). When population grows in an unprecedented rate, more and more physical space is necessarily needed to accommodate the increasing number of people.

Forest fires, which can happen naturally or artificially is probably the most heinous cause of deforestation. The causes can be actually categorised into different subcategories- rural sector, urban sector, corporate sector, and government demand. Of all the reasons, the ever-increasing demand for alternate energy resources highly causes the destruction of trees.

The rising need for agricultural land also require cutting down of trees to clear land for cultivation, and the same goes for overgrazing. Furthermore, faulty agricultural practices such as jhooming, or slash and burn agriculture practised in India also cause harm.

Another major problem cause by deforestation are the different types of pollution, which it facilitates. But, if we are to summarise the causes, human greed is most probably the chief cause behind deforestation.

The literal opposite of deforestation is afforestation. Afforestation is considered to be the “universal solution of deforestation”. This word can be defined as, simply, planting more trees. It should be realized by the government and the citizens of a nation that forest cover and resources can increasingly add on to the wealth of a country, especially economic wealth, and therefore take steps to reduce deforestation.

Proper literacy and practical awareness can, to some extent, make people informed about the harm they might have previously causing without actually knowing so. By realising the error in their own practices, at least some part of the population will consciously attempt to correct their doings and bring about a positive change through beneficial actions such as afforestation, or simply, the discontinuation of practices which might cause deforestation.

Additionally, importance should be given to nurseries, so that the plants are properly equipped to deal with adverse conditions in the later parts of their life; however, this method is not universally applicable. Governmental programmes like Van Mahotsava, etc. can also bring about a mass change in the current situation.

These programmes encourage people to plant more trees and be aware of the importance of plants. Bringing fallow or non-cultivated lands under forestry can also prove to be helpful.

Finally, central and state governments should try to incorporate forest-friendly propositions in their schemes and policies, as legal enforcement is majorly significant in causing positive changes.

Municipals should also facilitate urban beautification through planting more trees all over the cities (as has been done in Kolkata) to beautify the city as well as enhance the environmental conditions, thus, achieving two goals at once.

In the present times, when global warming is on such an alarming increase, environment is of prime significance to all the inhabitants of the planet earth, as a greener environment is our only chance of survival.

Trees are of prime importance to humans, and vice versa, and only a symbiotic relationship between them can allow them to exist peacefully on the face of the planet.

Therefore, we should ourselves start contributing in whatever ways possible to end deforestation, and we should not stop at an individual level- we should also try to involve other people into this act, and only when a change happens on a large scale than the scenario can really transform.