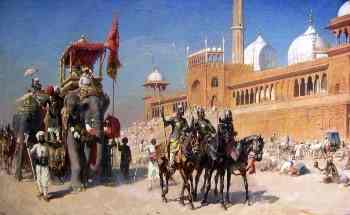 Everything that comes in the world has to end one day. This is a universal law of nature. Nothing is stable. Changes occur and things change.

Though Mughal Empire reached pinnacles of heights with its glorious phase in India but it also disintegrated within 50 years after reaching its highest peak.

During the last years of Aurangzeb’s life the decline of Mughal Empire started and after his death; within 50 years the whole empire was sabotaged as there was nobody to take over the kingdom that was as powerful as their ancestors.

Causes of decline of Mughal Empire

Aurangzeb was an ambitious military ruler. Though he inherited a large empire yet he fought several battles to extend his, kingdom. Lots of money was spent in these military campaigns which had emptied the Mughal treasure.

Lack of communication among the entire empire was also one of the major reasons of decline. It was quite impossible to communicate along long distances in those days with ancient means.

Aurangzeb’s 27 years of battle with Maratha’s leader Shivaji proved to be cancerous for him and his kingdom. Though he won the battle but lost almost all his wealth to these campaigns.

Aurangzeb spent most of the time in battlefield away from capital. In his absence the nobler and courtiers became more powerful taking advantage of his absence. They took big decisions and hence gained more power in the process.

Aurangzeb’s religious intolerance policy had weakened his kingdom. He was hated by all non-Muslims in his empire. At that time more than half of his population was non-Muslims and he lost their support to his adamant mindset.

In the pursuit of expanding his kingdom towards Deccan, he weakened his northern empire as he did not take care of his existing empire.

His earlier predecessors were very eager to make alliances with Hindu kings and Rajputs. Burt Aurangzeb’s conflict with Rajput states turned them rebellious. Rajputs tried to take advantage of absence of Aurangzeb.

He executed the 10th Sikh Guru Sri Tegh Bahadur. Sikhs could not tolerate it and they rebelled against him.

Being a Muslim fanatic, he could not tolerate non-Muslims. He imposed oppressive laws on them which turned the common mob rebellion.

After the death of Aurangzeb

Aurangzeb died at the age of 88. After his death, war of succession started among his three sons. The eldest son Muazzam won the battle and got the throne. He was named as Bahadur Shah. He was 72 years old when he ascended the throne.

Although he tried to make compromises with Rajput’s, Marathas, Jats and Sikhs but was unsuccessful. He was too old to manage such a big kingdom. The Marathas and Sikhs powers had increased too much for a mere old king to oppose. After reigning for 5 years only he too died in 1712.

There were no rules set up for the succession of throne among Mughals. It always led to a bloody-battle between brothers. After Bahadur shah’s death too, a war broke among his sons.

Jalandhar Shah who was seated on the throne after the death of Bahadur shah was a weak and incompetent ruler. He died just after one year after his succession to the throne.

The next ruler Mohammad Shah served the kingdom for a period of 30 years. He was the grandson of Bahadur Sahh. He was just 18 when he sat on the throne.

Due to his inexperience and inabilities, he was not able to suppress the revolt of different rulers. Several rulers had declared themselves as Independent.

This gave the Mughal empire nominal loyalty and finally the Mughal Empire broke. Mohammad Shah was not an able ruler’ he did not take notice of state affairs and never supported the able ministers of his court.

The weak state of India attracted many foreign invasions also. Nadir shah, the ruler of Persia attacked Punjab in 1739 during the reign of Mohammad Shah. Mohammad Shah was defeated in this battle and imprisoned.

Nadir shah then marched towards Delhi and massacred thousands of people here. He looted and robbed the treasure of Mughals and common man too.

He took Kohinoor diamond and peacock throne of Shahjahan. Nadir Shah Invasion disintegrated the Mughal Empire. Mohammad Shah’s empire of vast India was confined to Delhi only. He died in 1748.

After his death many inefficient successor sat on the throne like Ahmad Shah; followed by Alamgir II next was Shah Alam II and then Akbar II, Bahadur Shah II etc. but none of them had ability to rule over India.

During the rule of Shah Alam II in 1761, again a foreign invader Ahmad Shah Abdali, the then ruler of Afghanistan had attacked Punjab and conquered it. Ahmad Shah Abdali was a barbaric ruler.

He marched towards Delhi but by this time Marathas had gained enough power to stop him. In the third battle of Panipat, they fought and Ahmad Shah Abdali won the battle. Marathas was forced to retreat towards Deccan due to heavy causalities and losses. This invasion further shook the Mughal Empire.

Shah Alam II, after the battle of Buxar granted the Diwani of Bengal, Bihar and Orissa to East India Company. This way the Mughal Empire lost its worth and kingdom.

Finally the Mughal Empire had lost its recognition when bahadur Shah Zafar was deposed and sent to Rangoon by the East India Company.

This is how the Mughal Empire met it’s death.