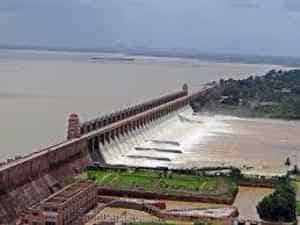 Dams are necessary for the survival of a country. Whether developing or developed no one can ignore its importance and existence. Dams are built across the river for various needs of human beings.

In India monsoon is the main source of water. Rivers mainly receive water during monsoon season only. So it is essential to store this water in reservoirs to regulate water discharge among different places.

When the natural flow of water is not sufficient to meet the public’s demand this reserve water of reservoir is released to meet the growing demands.

Growing population also puts pressure on the demand of more resources. Therefore there is always a need to build more and more dams.

The dams are built under several multi-purpose river valley projects. The motto of these projects is to store water for irrigation, generating electricity, prevent floods and enhancing afforestation in the reservoir area.

Till 2000, the number of dams reached to 4000 in India and it is gradually increasing.

The disadvantages of dams are mostly linked with it’s advantages. Everything has its own pros and cons.

Without dams a country cannot nurture its resources so they are an integral part of our system. India is a large country having lots of dam some of the few area;-

It is the highest dam in India having 261 meters of height and eighth tallest in world. It’s first phase was completed in 2006 and the two phases are still under completion. It has the capacity of installing 1,000 MW of electricity.

Bhakra Nangal Dam– this gravity is built across river Satluj in Himachal Pradesh having height of 225 meters.

It has them second largest reservoir in India, under the name ‘Gobind Sagar Lake’. It can generate 1325 MW of electricity.

This gravity dam is built to support hydroelectricity of strength 1450 MW of India namely Gujarat, Madhya Pradesh, Maharashtra and Rajasthan. It is the second largest concrete gravity dam on river Narmada.

It has two towers namely “Gandhi Minar” and “Nehru Minar”. It has a big reservoir whose length is 55 km which supports irrigation, power generation and flood control in that area.

Nagrjuna Sagar Dam– it is the world’s largest masonry Dam built in 1967 with a height of 124 meters built across river Krishna in Andhra Pradesh.

This dam has a reservoir in the form of a lake which is the largest man-made lake in the world. It is a symbol of pride for Indians. This 1.6 km long dam has 26 dam gates. Its power generation capacity is 815.6 MW.