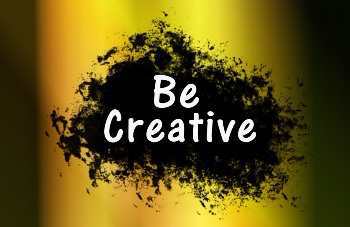 The whole world is ruled by creative ideas. Creativity allows a man to think beyond the thinkable and lets him into a world of creative ideas. When we see a small lump of clay lying on the table, we may not do much with it. But when a small child encounters it on the table, he is bound to pick it up, give it some form according to his creative ideas, bring life to it and transform it into some other form. So what is the job of creativity here.

Creativity is that tool which can convert or give a new dimension or transform a certain thing into one or many other forms based on the imaginative capacity of the creator. So how exactly is creativity measured in a person comes up the next question.

Creativity is un measurable. It is not a tangible resource. It is a complex intangible mixture of imaginative thinking space combined with idea that blend and fuse to come out from the creator’s mind guiding him to perform actions based on the creative thought process that just arose in his mind.

Creativity brings new life to a still resource, it has the power to display something beautifully, and it has the ability to make new things out of nothing.

A person’s imaginative space is where the birth of creative ideas takes place. Suppose we provide a plain paper to a class of students and ask them to fill it up with their own creative ideas. After a while when the papers glanced through, one may find ideas thrown on the paper based on every student’s ability and creative thought processes.

One student may find it exciting to draw a cartoon, another one may find his creative talent in drawing a landscape, and another one may like to fill in with a rainbow of colors and so on. So why exactly does the creativity of one person differ from that of another one.

That is simply because no two persons can think and act alike. If we provided mangoes to two persons and asked them to prepare mango juice out of it, both of them are going to turn out differently. Probably the essence of the mango juice may taste similar.

But when it comes to adding the sugar and water, there will be minute differences, if not for very big differences and the taste would look somewhat similar  and also dissimilar in some aspects. That makes the point clear that no two things can have the same creative bent of mind.

So how exactly does the creativity of a person come into play. Suppose we see a paper lying in front of us. A layman just idling on his couch doing nothing may probably start playing around with the paper and probably fold the paper into a square shape. A small child who looks at his being done, may like to add to the paper form by putting in his creative instincts.

His age acts as a determining factor. Whatever creativity he displays is going to be age appropriate and when he starts thinking out of his creative box that becomes his talent. The second factor is the imaginative capacity of a person built on one’s thinking capacity.

An average person would probably convert the piece of paper into a boat or a house or a gun and his approach is determined by how far he is allowing his mind to stretch. He may have tried doing the boat or the house multiple numbers of times and the next time he is going to pick up that paper, he is bound to be trying the same thing again.

His mind is programmed in such a fashion so as to perform the same task over and over again. There is redundancy of his creativity here, but also loss of new creative ideas from within.

If the same person performed a different activity out of the same paper, like probably trying to make a paper flower this time, that which he hasn’t tried before and has to apply his mind to actually give it some form, his creativity now comes to play.

Creative ideas do not guarantee pre determined end results. If we are interested in painting a pot with oil colors and sit down to perform the task, we have an initial idea of what is to be done. OR assuming we have a picture that is to be depicted on the pot, we start with our strokes on the pot.

When we begin, we are unsure how the strokes are going to proceed. It is a combination of our imagination with our ideas to better that imagination that results in a creative end product.

When we begin with a vague idea of how the pot is to be painted, we have a certain picture of the depiction in our mind, how it would look on the pot when it’s done and how the spread of colors would be, etc. But the idea in our mind may certainly not match with the final depiction on the pot.

Creativity of one person differs from another person. The way one person thinks would definitely be different from that of another person. Children  are known to be very creative at a very young age. Their creative instincts and skills should be encouraged so that they improve their thinking abilities.

Experienced elders usually advise new generation parents to never stop their children from doing things in a different manner. That is because, the maximum of creative abilities bud and spring when children are young. The way children think and the way in which elders think about the same matter could be found to be entirely different and varying.

Elders seem to add their past experiences, their worldly knowledge before applying their creative minds. Children are different. They don’t have worldly experiences to support in the background. They think in  a very open manner. They do not have wisdom of what would be wrong or what would seem right.

All they know to directly apply the idea that arises in their mind, transform it according to the flow of the idea and give it a final form based on the final creative idea.

Men and women lead lives in their own creative ways. Creativity is something that comes into play in all our lives, knowingly or unknowingly. We use our creativeness daily in some form or the other. Probably when a mother is preparing a curry in the kitchen and thinks of improvising to make the taste better, she is using her creative instincts in the process.

She is making use of her experiences in cooking, applying her creativity to try out something new and the end product results in a creative end product. A change is certainly brought about in our daily lives by application of creativity to it.

The application of one’s creative abilities combined with creative thinking makes a difference in one’s work. That work, when delivered at the right place and at the right time, takes the name of talent. Talent may go unnoticed, but creativity does  not require any platform to get noticed.

It is inherent in a person and does not require the use of any channel to exhibit its form. Even a small daily task may need some creative help when it does not recur the same way as it happened the previous day. So, creativity is a tool that makes things around us look beautiful and in a different and better formation.