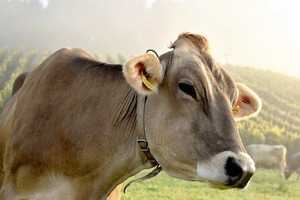 Cow is the holiest of all the animals. Especially in our country India it is considered as a highly sacred animal. We worship the cow as mother and it is called as Gau-mata. Cow is hardly found in the wild. Since it’s not a very rare animal therefore, is found almost everywhere in the world.

Although due to change in the geographical conditions its breeds differs in features as well as characteristics.

Cow provides us with milk (which contains protein, calcium, vitamin A, vitamin D, vitamin B 12 etc.) which is converted into various other milk products. It is also reared for its meat, skin, horns and other body parts.

Cow is a mammal; the warm-blooded animal, who feeds their young one on their milk. Cows are often found in large herds where they are called as cattle. It’s the female member of Bovine family. Cow is a livestock animal, such animals are raised on large scale for economic benefits.

Cow generally eats green grass which is full of cellulose, and green leaves etc. When domesticated, they are provided with straw mixed with water and some nutrients. This is given to the cows to get good amount of quality milk from them, which we use for various purposes.

In developed countries of west cows i.e. cattle are raised scientifically on large pastures of land. When they graze on health and nutrition rich pastures, they provide best quality dairy and meat products in large quantities.

Cow is a very gentle animal by nature. It hardly turns out to be aggressive even when troubled often by the kids for fun. May be this is the reason that one more creature is called as cow referring to its mild behavior. The underwater, herbivores mammal Dugong is called ‘Sea-cow’.

Anatomy of the Cow

Coming to the physical structure of Cow, it is a four-footed animal. Its feet are ungulate like those of horse, deer, goat and most of the other herbivores animals. Cow has two horns on its head part.

Nowadays, new breeds of cow are developed which don’t have horns over their heads. It has a long tail with hairy bunch at its end, which they often use to keep mosquitoes & flies away. White colored cows are most commonly visible. They come in other color and textures also. Like, brown, grey, black, tan etc. with textured skin.

Cow is a ruminant which means, they chew the cud (i.e. the food they have swallowed already and is stored in a part of their stomach). Similar to other grass-eating animals, cow also has a stomach divided into four compartments namely, Rumen, Reticulum, Omasum and Abomasum.

This type of stomach helps grass-eating animals to eat once in bulk and then chew it for long time and making the food digestible.

The average age of cow is between 20-25 years. Although there are evidences of them living even more, depending on how well they are raised. Sometimes their lifespan is cut-short due to disease also.

Most common disease affecting cows is ‘Foot & Mouth disease’ which causes swelling, inflammation and pain in their foot and mouth areas. To save them from such infections, they should be provided with proper veterinary care.

Cow in Ancient Mythology and Culture

Since the Vedic times, cow has been worshiped in Hindu religion as a divine creature. One of the most popular deity of Hindus, lord Krishna was a cow-herder and called as ‘Gopala’, one who looks after the cows and ‘Govinda’ the caretaker and savior of cows. Since Vedic times till today, killing if a cow and eating beef has been considered a grave sin.

Moreover, in earlier times next to the land holdings, cow (along with other cattle) used to be counted as a form of wealth. The more the cows a man had, the wealthier he was considered. Cow has a special place in Indian culture, and it’s quite interesting to know that India has the highest cattle population in the world. And we can see it practically, on the roadsides, public places or elsewhere.

Other than Hindu mythology, cow is considered a holy animal in Christian and Jewish traditions also.

Usefulness of Cow to Humans

Besides providing us with milk, cow gives us so many other valuable products. In fact, it can be rightly said that each and every thing we get from the cow is useful to us in some way or the other.

As we all know, the most precious and valuable product which we get from the ‘mother cow’ is milk. It is considered so pious that it’s often used in religious rituals. Cow’s milk is fortified with sufficient amount of protein, calcium, useful vitamins and minerals. Despite all this, it is very light to digest.

Therefore, it is the best option for milk suggested by doctors to the small children and patients with weak digestion. With the cow’s milk we derive and prepare various kind of milk products like, curd (dahi), paneer, ghee, condensed milk, khoya (from which various kinds of delicious sweets are prepared) etc. Other than this, Cow dung is no less useful than cow milk. It has anti-bacterial properties.

Cow dung is used as a major source of cooking fuel in the villages of India. Here, the fresh cow dung is flattened with the help of hands and dried in the sun to be used for a long time. This is called ‘Upala’. These dried Uplas are smoked in the villages in evening to ward off mosquito, flies etc. and keep interiors of the home pure.

Cow dung is also used in BIOGAS PLANTS for the purpose of electricity generation. Electricity generated through biogas is very affordable. Apart from this, Urine of cow also has many disinfectant properties. It is also used as a substitute of phenyl. In fact, in Ayurveda Gomutra, i.e. cow urine has been considered as a sure shot medicine to cure some of the disease.

“Panchgavya”, that is five elements derived from the cow are considered very auspicious and pure. These five elements are – milk, curd, ghee, Gomutra, and Gobar (cow dung). In Hindu culture and tradition, the use of these five elements is highly recommended for domestic and health purposes. They are also recommended to be used to keep away various infectious disease, negativity and other evils.

Despite being a holy and useful animal present condition of cow is very pathetic, especially in India. Only a very few number of cows are looked after properly in Gaushalas (cow-sheds) with due veterinary care, rest are left unattended.

Some of them are found eating garbage near dustbins where they often swallow polythene bags, causing death due to suffocation. Some land in slaughter-houses to be chopped. At the roadsides they often get hit and injured by running vehicles and so on.

Considering its place in our traditions of ancient times and its usefulness in today’s time we must ensure that this animal is treated well with due respect and care.