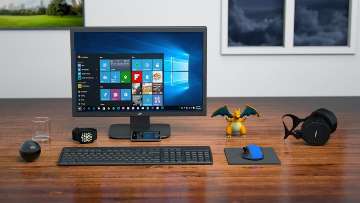 Charles Babbage was the one who invented the first mechanical computer in 1837. But due to limited finance and other reasons he was not able to complete his work.

Later his son Henry Babbage completed his work and made it into a simplified version of the analytical engine’s computing unit.

Computer is one of the most important inventions of our age, we can say that is a wonderful gift of science to the humankind.

Today computers are found in almost every house and computers are getting more advanced as the demand for a better computer is increasing day by day.

A computer consists of a central processing unit (CPU), monitor, keyboard, printer, UPS and mouse. Between the years 1940 and 1945 when the first electronic digital computers were developed.

Initially the sizes of the computers were as big as a room and consumed a lot of power.

The main motive behind inventing a computer was to create a fast calculating machine having the capability to complete more than task in small amount of time. It is designed in such a way that it can do work of many human beings alone.

During the World War II, it was very important to calculate the speed of the enemy’s weapons and their location to defend them. And these calculations can be done only with the help of advanced machine as these calculations had to be done accurately and mathematically.

Firing tables are required by the soldiers so as to defend the enemy and only computer can produce such tables with speed and accuracy.

And to create such technology in that time was a huge task. It requires a lot of brain power and money. ENIAC was the first computer produced by the Moore School for the US Army in 1946. ENIAC was used to produce the firing tables for the US Army which helped them in defending their enemies.

As the time has passed computers are evolved and because of artificial intelligence we are using the most advanced form of computer that has helped the humankind in very sector of life.

Each time a lighter, speedier, smaller and more powerful computer is launched compared to its previous models. Today computers have conquered almost all walks of life and have been a dominating factor since 1970.

They are almost used in every sector like weather forecasting, machinery operations, spacecraft etc. Apart from this they also play a vital role in the medical sector as they can be used to store important information that can be referred later on.

We can play games on computer, book tickets through the internet.

Computers are necessary in printing newspaper and books. Traffic of the big cities are also controlled by the computers and the police use computers to keep a track of the criminals.

They are also by the MNC’s companies for maintaining their accounts, stocks, payroll and invoice etc. We can even shop online, pay our bills, video chat, email, messaging etc. anywhere around the world using computer.

Computer is considered as a large storage device and a big dictionary where we store huge amount of data like the photos, images, movies, songs, information, videos, audio, games and many more.

It also provides a wide variety of tools like the paint tool, snipping tool, calculator, notepad etc. which are very beneficial for us.

Many institutions, schools and colleges emphasize on computer education as it helps in enhancing the skills and learning through computer a bit easier and a lot of fun.

In higher education, there are subjects related to networking, hardware and software etc. so it would be great if the students are familiar to such things in their early stage of life.

There is nothing wrong in saying that it is the backbone of the Information Technology with the internet. But having said that it has also negatively affected the human lives because like a coin has two faces to it Heads and Tails, everything in this world has two sides to it good and bad and the same is with the computer.

The negative side includes the cybercrime, false identity leading to trapping the victim, pornographic websites that can be easily accessed by the children’s that can spoil their life.

On the other hand, students can use to prepare their notes, learn poems and programming languages learn to paint and draw and many more which helps them to enhance their skills. At the end, it totally depends on us how we use it.

The world would not have been there, where it is today without computer. Computer have a great future but it totally depends us how we deals with it.