Charles Darwin’s theory ‘The fittest of the survival’ entails a story of competition. It is a competition for survival of the species on Earth. But as Charles says, only the fittest and the most able survives. Life is a race. It is a never ending competition.

But the one who sits at the topmost position is certainly at an advantage to all the beings inferior to him. According to Charles Darwin, only the species who are able to survive the externalities arising due to the environment or the society are able to survive on this earth.

The species that are unable to bear the harsh conditions ultimately perish into oblivion. The same way humans have to compete in their daily lives for various things to achieve success.

Why do you need competition in your life?

A life lived without competition is a life wasted. Without the presence of competition in your lives, you will never be able to know your worth. To assess yourself worth is necessary for achieving a sense of accomplishment. This gives the individual personal satisfaction without which a human stands nowhere. A competent live is all one ever wishes for.

We are surrounded by competition everywhere. Competitive exams which are so hard to crack are a live example of competition among humans. So many students sit for the exam yet only some score the desired grade. Leave this, people compete to even grab a seat in the metro or a bus.

Where do you find competition? 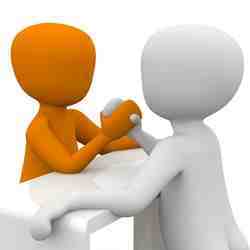 We are surrounded by competition everywhere. Competitive exams which are so hard to crack are a live example of competition among humans. So many students sit for the exam yet only some score the desired grade. Leave this, people compete to even grab a seat in the metro or a bus.

Competition is a way of life. It is generated knowingly or unknowingly. In these modern times, cities are running towards development. They are competing against one another to become a better place to live in. But a city also competes and fights its own mistakes committed in the past.

It is a very famous saying that, ‘The biggest competition of me is me myself.’ I am my own biggest competitor. Each human being strives to become a better version of himself as he continues to develop. He fights his own inner demons to emerge victorious from the chaos clouding his soul. A human being commits a lot of mistakes in his lifetime. And he seems to learn from them slowly. He tries not to repeat the mistakes he did earlier. He strives incessantly to attain success and make his life better.

Competition has no limits and no bounds. Indulging in healthy competition is always a good idea and helps in personal growth and all round development. But maintaining unhealthy competition damages a person from inside. It destroys their hearts in the pursuit of success.

Unhealthy competition does not encourage a person to learn. But it only keeps the person awake in the pursuit of defeating the other person.

The theory of Competence!

Competition is a rude yet effective motivation. Seeing their colleagues do better than them, students are inwardly compelled to work harder than the others. It is a driving force that attempts to work out the students even more. For example, take the second runner up in the class.

He attempts to be the first because he feels that all his efforts are in vain if he is not able to score the most marks. Similarly, the first runner up does not want anyone to succeed his position. This is the theory of survival. The fittest of all survives. The best of all races survive.

Competition is seen in all spheres of life. When Google had to appoint a CEO, there were two people in line for that coveted post- Sundar Pichai and Cyrus Mistry. Both of them were equally talented and visioned men. Their competency and hard work for the company had always outshone the other employees.

But after a meeting, the board of directors decided to appoint Sundar Pichai as the CEO while Cyrus Mistry was appointed the COO of the organization. By quoting this example, I mean to clarify that competency is at the core of every organization.

Organizations compete with each other in terms of revenue generated, output sold, market share leadership and quality of the product. It is generally seen that the one who emerges the winner witnesses the flourishing of his business while the other competitors suffer.

Even when we don’t realize that we are competing, we are striving hard to become better than everyone else. From a very young age, the spirit of competition is nurtured in our spirits. Little children are made to compete with each other at a very young level in small competitions like fancy dress competition, relay race etc.

But as we grow up we learn to think out of the box. And our participation in various activities begins. Competence develops self confidence and the feeling of success. It helps to discover the hidden potential in a person.

Competition is not just about winning but it is more about trying hard to win. It is about fighting for the prestige or yourself worth so as to prove yourself to the society.