Christmas comes every year on the 25th of December bringing joy and merriment in the lives of many. Christmas marks the birth of our beloved Jesus Christ. It brings not only joy but also new hopes in the lives of the poor and forsaken. Hence the joy of Christmas is incomparable.

There are certain symbols which introduces the advent of Christmas. Even you can relate with them if I count them one by one
A heavily decorated Christmas tree
An old man in red dress usually referred to as Santa clause
Snow
Delicious cakes and pies
Gifts (some kept under Christmas tree)
Reindeers pulling a sledge
Shimmering balls and trinkets
Socks hanging over a fireplace

All these are symbols of Christmas. Tell me weren’t you able to relate with them just like I did? Whenever Christmas knocks at our doors these symbols starts appearing on the streets, in the malls and shops. 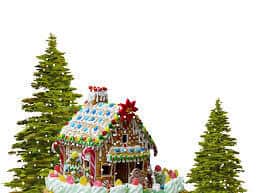 Mary got a vision from god that she will soon be conceiving the son of god before her marriage. God chose her to be his mother because of her sacred and pious life.

Hence Mary and Joseph were blessed with a child. But Joseph was worried about Mary conceiving a baby right before their marriage. Another night an Angel appeared to Joseph and told him that he is lucky that his wife has been chosen to bear the son of god. He should marry her without a second question.

This child will grow up to be the ‘saviour’ of the world. Hence Joseph did just as he had been instructed and so Mary and Joseph got married.

It was carried out in Jewish way rather than Roman way. This meant that the families had to register in their historical tribal town rather than where they actually lived.

So Joseph and Mary who was pregnant at that time had to travel from Nazareth to Bethlehem, as this was the town of Joseph’s family. The journey was of seventy miles .Mary and Joseph had to travel slowly because of the baby that she was carrying.

At that time there was no place such as a hotel. Travellers used to live in extra rooms or along with the families in their houses that they found on the way. So during their way they found maximum houses filled with other travellers who were also travelling for the census.

Finally they came to a very poor shepherd’s house who took them in. They were given place to sleep in the animal barn. It is there that Mary gave birth to Jesus. She gave him birth in a manger from which animals ate their hay from. In those days it was customary to wrap newborn babies tightly in a long cloth called ‘swaddling clothes’.

The baby was wrapped in the clothes that they could find at that time. When Jesus was born a very star appeared in the sky. Wise men in faraway countries noticed the star and guessed what it can mean.

In old writings it has been mentioned when that when a new star appears in the sky a great king has been born. They set out to find the new kings and bring him gifts.

On reaching Bethlehem the three men found out that the star is fixed in the night sky. It seemed to stop and shine down directly on the place where Jesus has been born. The three men entered the barn and saw Baby Jesus and worshipped him. They presented their gifts to Lord; the gifts were gold, frankincense and myrrh.

So this is how we see that the festival of Christmas start with the birth of Jesus. Now it has changed a bit with the span of time but the feels remains the same. It has spread to different countries.

Some celebrate Christmas in winters and some in summers. But Christmas will always remain a festival that brings joy to all of us.