In 1970, a movement `Chipko` was started in the hills of Uttarakhand to save trees from falling. As the name suggests, `Chipko` means ‘embrace’ or to ‘stick’. The villagers, especially women of that region hugged the trees. This prevented the contractors from felling them.

The `Chipko movement` or `Chipko Andolan` was a forest conservation movement in India. This was a non-violent movement inspired by Gandhiji`s principles. This movement had slowed down the rapid deforestation of that area.

The beginning of the movement and its various causes 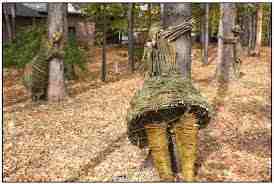 Most of the leaders of the Chipko Movement were village women and men. They strove to save their means of subsistence and their community. Sunderlal Bahugana with other villagers started the non-violent protest. He hugged the trees to save them from falling.

Originally this movement had started in the early 18th century in Rajasthan. Amrita Devi, a village woman came along with 84 villagers to protect trees from felling on the order of the king.

The first Chiko Movement action took place in April 1973 in the village of Mandal. It spread over the next five years to many Himalayan regions. Simon Company was a sports goods manufacturer based in Allahabad. The Government gave a contract to cut 300 trees by the forest department. Sunderlal Bahugana headed the DGSM (Dasholi Gram Swarajya Mandal).

The forest department had denied the DGSM to cut 10 trees to make simple farm tools for the locals. The villagers were hurt due to this order of government. The government had snatched away their livelihood. They justified it by saying that it wanted to protect trees.

But they gave permission to the contractor for profit making uses. The villagers confronted the lumbermen when they arrived. The DGSM workers were beating drums and shouting slogans. They asked the lumbermen to retreat. The contract was cancelled and the Sangh was given permission for their work.

The Uttarakhand region is a remote area with very thin and fragile soils. The area has abundant water resources and forests. The people living in this region are farmers. Their major occupations are terrace cultivation and animal husbandry. The accessibility of this region had also increased due to the development of roads.

This attracted many people to the Uttarakhand region. This was because of its rich minerals, soils and forests. Soon the area became the object of exploitation by these entrepreneurs.

The region was exploited for products like timber, limestone, magnesium and potassium. The major source of conflicts in this region was the exploita­tion of the forests by the entrepreneurs with the approval of the government.

The contractor`s lumbermen again arrived on 25 March 1975. The contractor ordered his lumbermen to cut down 2500 trees near Reni Village. The DGSM workers were in Chamoli as they had gone there for some urgent work. Laborers start the logging operation.

A local girl informed Gaura Devi, the head of the village Mahila Mandal Dal of the  village. She along with 27 other women reached the area. They confronted the laborers by hugging the trees to stop them from cutting the trees. The women kept all night vigil guarding their trees till they left the village.

Next day other villagers joined and supported them on hearing this news. After four days standoff, the contractor left. This was the main event of this Movement. The involvement of mass women made this movement successful.

Soon this news spread like fire in the country. This was just the beginning. Sunderlal Bahugana was the founder member of DGSM. He spread awareness for the ecological balance among villagers. He appealed to the then Prime Minister Mrs. Indira Gandhi in a letter addressed to her, to conserve the trees.

The movement aimed at ensuring an ecological balance and survival of local villagers. The villager who were only dependent on forest for their livelihood. Sunderlal Bahuguna along with Chandi Prasad Bhatt marched 5000 km. in trans-Himalayan region. They wanted to spread the movement. Their slogan was “Ecology is permanent economy”.

Over the next five years the movement spread too many places throughout the Himalayas. The villagers demanded not to give any contract to outsiders of that area. Local communities demanded control over natural resources like land, water and forest. This movement set a bench mark for socio-ecological movement in other forest area too.

The spread of this movement

All these movements and drives of awareness resulted in 15 years ban on the felling of the trees. The ban was an order by Mrs. Indira Gandhi, the then Prime Minister of India. Later ban was also imposed in other states. This movement not only initiated awareness in India but the world also. It also generated pressure for a natural resource policy.

Pandurang Hegde started the southern version of Chipko (hug the trees) movement. He started the movement in September 1983 at Salkani. The movement had a ripple effect not only in the state but also in parts of Kerala and Tamil Nadu.

Dhoom Singh Negi and Bachni Devi are some other people who helped in this movement. Chandi Prasad Bhatt, a Chipko activist taught people how to establish local industries. His method included conserving and sustaining the use of forest wealth.

Ghanashyam Raturi, a Chipko poet wrote many songs. His songs echoed in Himalayan region like “What do the forest bear”, “soil, water and pure air”.

The Republic of India awarded Chandi Prasad Bhatt with the Ramon Megaysay Award in 1982. Sunderlal Bahuguna was also awarded the Padma Vibhushan in 2009.