I Extend my humble greetings to everyone present here. Today I’m going to speak about a topic of utmost importance in today’s society. Child labour primarily refers to the employment of children below the age of 18 without proper payment, consent and proper workplace conditions.

Child labour today is an extremely shameful vice the so-called modern and develop society that we live in. In the want for cheap labour, it doesn’t stir our souls employ these little ones and make them work and underpay them. These kids are all so badly mistreated and physically abused. 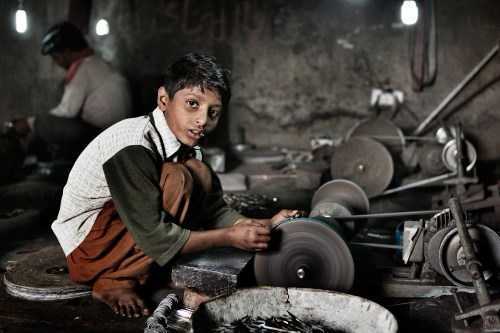 The problem of child labour is mostly prevalent in developing Nation like ours where large organised factories employee little kids to work in lieu of a meagre survival and hand to mouth existence.

Child labour is today a subject without realising the reason that has deteriorated the purpose rather than solving. In some families of rural areas due to unavoidable reasons children are only source of income for the entire family.

Such children when they are deprived as factory or shop workers have no choice but to make and sell old items in the streets of urban areas of become child prostitutes.

Many children are indulging into these activities. Ultimate objective of a child is to earn and feed their mother or parents. It is now the government and NGOs or other international organisation that can help them by launching schemes of education based on earning.

These kids should be taken up and trained and educated so that they can earn some proper living ones they reach the earning age.

The Tiny Tots I usually employed in firecracker factory because they are small hands and fingers can easily feel the gunpowder into the crackers. This is up a lot of money for the manufacturer’s because the children have to be paid very little and they cannot even fight for their own rights.

However, in these factories the kids not only are made to work for extra hours but are forced to work in an unhygienic and hazardous environment which are more harmful for kids than adults because kids have a weak immune system. Another place where child labour is rampant is in the form of domestic help.

These children are usually sold by their parents in return for a lump sum amount and have to spend the rest of their lives in service of their buyer.

Some of these kids run away from home and voluntarily work as domestic helps in order to survive. A few others are forced into being domestic helps you by family members were no one answered the child is the sole bread earner.

Several NGOs in today’s world like the United Nations, the UNICEF, Amnesty International as well as the National Human Rights Commission of India are instrumental in the abolition of child labour from the society.

They have been conducting awareness campaigns everywhere throughout the world as well as in our country in order to make the people aware of the hazards of child labour and what a child could have been if had not been forced to work and was allowed to study. The only weight that these kids deserve on their shoulders is that of books and not of bricks.

All the laws do exist for the punishment of the people who employs young children as workers. Fine of up to 20000 rupees and imprisonment up to a year is presently the punishment. Strict laws have to be passed and strict punishment is to be given to people who are found accused of wrongfully imposing child labour.

Kailash Satyarthi, the 2014 Nobel Peace Prize winner had worked all his life and dedicated it for the betterment and rescue of children who have been wrongfully introduced to child labour.

He has dedicated over 40 years of his life to the cause and still continues to run various awareness campaigns in order to educate the children of their rights.

He has also head rescue in numerous children throughout and has a longstanding career and has have helped to save the lives of those children by giving them proper education and facilities so that they can be what they want and live their own life once they grew up after they have been given proper education.

Kids are the future of our nation and it is therefore imperative for us to nurture them into able healthy individuals who can work for the betterment of themselves as well as for the nation to take it to the Pinnacle of its success. Today our country has the greatest population of young ones.

The strength of a country is known by the strength of its youth. Therefore, in order to build a strong country, we have to build these young kids into proper adults which is only possible if the menace of child labour is driven away. It is only with the help of these kids that the nation can grow and finally raise its head as one of the world leaders.