Birds of a feather flock together – Essay, Meaning & Expansion 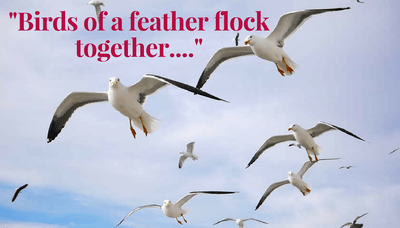 This phrase basically or literally means that birds with similar feather or birds that belong to similar or the same species tend to fly together in the form of flocks. This is applicable to humans also.

This proverb may sound very simple to understand and interpret but has a deeper meaning in terms regarding humans. This proverb means that people having the same character, thinking and habits will tend to be together.

This phrase explains that whenever a person tries to socialize or interact with people in the society, he will most definitely interact and stick together with the people who have similar personality and character.

It is well known that a person likes to be with or likes to be friends with those people who are like him in terms of mentality and character. Therefore, it also said that a person’s character is known by the type of friends he has.

People do not feel comfortable with those who do not have the similar behavior or attitude towards life. For example, young people tend to be with younger people only. They do not go and be friends with old people because there is a difference between their thinking and mentality.

Youngsters feel that old people or their grandparents tend to think a little primitively. Especially the teenage and young adult or adolescents feel restricted somewhere due to their grandparents’ influence in their family.

Similarly, the grandparents or the older people find that today’s generation is being too modern and therefore, are forgetting their culture and traditions.

Therefore, they are not happy with their younger generations but their voices fall on deaf ears and therefore, they tend to stay away from youngsters. They stay among their own age groups and also with the people who have the similar kind of mentality.

The phrase literally means that birds who have similar feathers body structure or overall who belong to the same species always fly in the same flock that is they always stick together.

Similarly, humans also tend to be with the people who have similar interests, thoughts, likings, etc. Also, humans tend to be together irrespective of their gender, age, etc.

People tend to always be in search of those people who are similar to them. It is not necessary that a person will always have similar behavior and thoughts to that of his family.

Sometimes, a person’s family might have different people that is people belonging to different age groups and more people of the opposite gender than the same one.

All these factors will affect their thinking, behavior and character which will definitely affect the interactions among the family members.

Therefore, there will be clashes among the family members or less talk among them. And hence, there is a possibility that a person will therefore, have stronger emotional bonds with his friends rather than his relatives.

But when a person is unhappy or not satisfied with his family relations, he/ she become emotionally unstable and therefore, might fall prey for the wrong people. Sometimes, people do not think before making friends due to their unbalanced emotional condition and therefore, unknowingly make bad friends.

But as we know that friends, work environment or even watching various shows on the TV affects a person’s behavior and mentality thus, overall affecting and also sometimes, changing his or her character.

During all these changes, there is a high chance that a person may encounter some phase in his life which might alter his thinking or look out towards life.

This change in the behavior might be negative and therefore, make the person more depressed and have more negative feelings towards life.

This might affect his behavior in the society and also affect his character gradually over a period of time, until a moment where he cannot go back to him being his previous self’.