Bipin Chandra Pal was an Indian nationalist revolutionary and was one of the members of the Lal-Bal-Pal trio.

He was one of the prominent leaders who contributed to the freedom struggle which earned him the epithet of Bengal Tiger.

He was born on 7th November 1858, in a small village of Poil, in Habiganj district of erstwhile Bengal, now a part of Bangladesh. His father, Ram Chandra Pal were a Hindu Vaishnava, a well-versed Persian scholar and a small landowner.

He had many facets to his great luminary personality. He was a writer, an orator, teacher, librarian, journalist all woven into one. Above all, he was a committed revolutionary.

He was devoted to the noble cause of providing freedom to the country from the shackles of an anarchist British rule.

He firmly believed that the way to throw the foreign rule out was by creating a pandemonium of ‘Swadeshi’ and thereby creating an economic blockage for them.

Pal’s life is a fable of severe metamorphosis to reversals, the way in which his fleeting and candid political contributions were reduced to non-entitlement.

His is a saga of inspiration and tolerance that multitude of life’s experiences pave way for. He was a firing prophet once and an almost forgotten hero later.

Bipin Chandra Pal was born immediately after the Revolt of 1857.As a child, he was deeply ousted by the agony and blood of the revolutionaries whom were crushed at the hands of Britishers.

At a formidable young age, he had resolved to play a crucial part for getting his fellow brethren out of the angst of foreign rule.

His father, Ram Chandra Pal were posted in Dhaka, then Dacca and wrote letters about the bloodshed and massacres of those who used to revolt at the hands of British sepoys.

He had thus learnt the three R’s from his father well, Rebel, Revolt and Rise. He was the only son of his parents but also had a sister named, Kripa.

Pal was sent to an English school in 1866, followed by two other missionary schools. At the age of sixteen, in 1874, he cleared the entrance examination of Calcutta University.

The following year, he went to Calcutta to pursue his higher studies but fate had other plans for him.

He left the formal education midway and became a headmaster of a school in Cuttack in 1879. He was given such a distinguished position owing to his extraordinary grasp over diverse subjects.

His formal education though halted, never jerked his quest for self-education. He had developed a notable taste for reading and this literary competence played a critical role in his fiery and radical endeavours later.

As soon as he had started studying in Calcutta, Pal had come under the influence of Brahmo Samaj’s founders and mentors.

He was deeply influenced with the doctrines and philosophies of the cult, so much that he became a member of the same but his decision met an anticipation from his orthodox father and he was alienated from his own family.

In 1881, Pal went on to follow what he preached and believed by marrying a widow out of his caste, named Nrityakali Devi.

His personal was also radical. And after the death of his first wife in 1890, Pal again went on to remarry yet another widow from an outcaste named, Birajmohini Devi.

However, Pal and his father reconciled their personal differences way back in 1886 and got reunited.

Pal joined Indian National Congress (INC) in 1886, which made him a leader Pan India. He dominated the proceedings of Congress through his oratory that were emerged from his clarity of thoughts and conviction.

He began to work as a journalist and associated himself with a wide variety of journals and newspapers.

His first venture into journalism was way back in 1880, at the age of 22, when he started writing for ‘Paridarshak’, a Bengali weekly being published from Sylhet, Pal’s native district.

In 1887-88, Pal then worked for ‘The Tribune’, annexing the Britishers with his mighty sword by writing liberally and quite fiercely, ideas of Indian Renaissance.

However, he started his own venture, an English weekly ‘New India’ in 1901 wherein he used to commemorate his ideals and understanding of Hindutva, politics and spirituality.

In 1906, Pal yet again started published his most significant journalistic venture, ‘Bande Matram’ which was an English daily with Aurobindo Ghosh as its editor.

Bande Matram gained a monumental support from the masses of Bengal and it successful began spreading the message of Swaraj, Swadeshi, Boycotting everything foreign and passive resistance by citing the agony and anxiety of masses.

It played an important role during the partition of Bengal and was received with utmost passion and enthusiasm throughout Bengal within a short span of its release.

Pal’s oratory was like a dagger, able enough to pierce anyone’s mind and arouse the feelings of angst towards Britishers and patriotism towards the motherland.

Bipin Chandra undertook a tour to various provinces of Bengal and Assam, most notable of his speech was at Madras in 1907 during his tour.

The arousal and awareness following his speech at Madras was so remarkable that Srinivasa Shastri was quoted saying, “Oratory had never dreamed of such triumphs in India, the power of spoken word was never demonstrated on such a grandeur scale”.

Lord Minto, Viceroy acknowledged in his Confidential Minutes dated 3rd May 1907 that, “Lecturing as practiced by Bipin Chandra Pal was far more dangerous than any number of newspaper articles”.

Bipin’s extremism and radical nature was observed in 1887, when he forced Congress to draft a resolution championing the cause of ill-treatment towards tea-planters in Assam.

Also, was notable, his agitation towards opposing various government laws such as the Vernacular Press Act brought forth in 1878 to keep in check the Bengali intelligentsia.

This aroused a strong resentment among the masses but was dealt rather moderately by the Congress which also left Pal angry. He also opposed Illbert Bill, whereby no European could be tried in court which had Indian Juries.

Pal had written about this in his biography, Memoirs as “burnt into the mind of the Indian Politician was a fateful lesson that if India had to protect her liberties and secure its expansion, she must start a violent agitation which will compel the Government to throw out this reprehensible measure”.

The extremists spearheaded by Aurobindo Ghosh and Bipin Chandra Pal, in Bengal believed in the overthrow of colonial regime, in the rapid and uninhibited economic development and in the enhancement of democratic opinion. 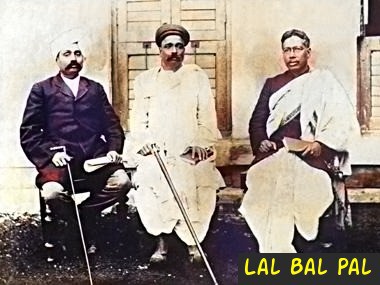 Their ideologies found similarities with those of the extremist section of the leaders of the INC, Bal Gangadhar Tilak and Lala Lajpat Rai forming a triumvirate of Lal-Bal-Pal.

The Swadeshi movement, sparked off by the partition of Bengal in 1905, which was formulated by Pal in Bengal, Bal in Maharashtra and Lal in Punjab chiefly was received as a bold assault on British rule.

The lower and middle classes began to be drawn gradually in the arena of national politics.

Lal-Bal-Pal chalked a strategy comprising of ideals and actions which constituted the undercurrent of militant nationalism.

But, the partition of Bengal by Lord Curzon and further imposition of certain laws and policies by Morley-Minto, later saw an upsurge of pan-Islamic tendencies against the Bengalis, Hindus in general.

Lal-Bal-Pal feared that this might lead to weakening of the Swaraj movement and dampening the course of India’s Freedom struggle. They did their best through their actions and words, written and verbal to lessen the dent so created.

In 1907, Aurobindo Ghosh, then editor of Bande Matram was arrested on the charges of sedition. Bipin Chandra Pal was summoned to appear in the court and give evidence in favour of the sedition charges.

But, Pal refused to cite any evidences against Pal which gave the court’s impetus to imprison Pal for six months that he voluntarily accepted.

The imprisonment elevated his status as a National hero when on 9th March 1908, he was released, people burnt fire crackers, rejoiced by organising meetings and processions.

This was the victory of the very ideals of national unity that Pal had wanted to inculcate in the minds of his countrymen.

Pal visited England thrice. Firstly, in 1898, for theological and comparative studies on a scholarship granted by the British and Foreign Unitarian Association which was working in tandem with the Brahmos in India.

But Pal soon gave up his studies and instead used his scholarship to preach Hindu theism and carry out propaganda of Independence for his country in England.

In 1900, he was invited by the New York’s Association of National Temperance, on a lecture tour lasting four months.

As a result, Pal also had his first USA visit and returned as fiery nationalist, teamed up with Ghosh, Lalaji and Lokmanya Tilak to carry on his urge of obtaining independence.

During his second visit to England in 1908, sponsored by Shyamji Varma, a revolutionary working in England and France, however witnessed a decline in his fierce temperament.

He adopted rather moderate views that failed to attract Labor Party’s consent for his quest of India’s independence.