We talk a lot about waste management and waste disposal techniques, about how waste treatment is very important to reduce the environmental pollution but has it ever occurred to us that what exactly is done in the waste management or treatment procedure?

A waste management treatment basically consists of recycling the waste product and reusing it. This basically is done for the major purpose of reducing the use of natural resources, generating energy from the waste products, etc.

There is a well-known recycling technique for biodegradable waste which is known as production of biogas. Biogas is produced by treatment of the waste matter under some synthetically set up environment.

The biogas can be produced from biodegradable waste which is a very broad term and involves mainly agricultural waste, food waste, excreted matter of the cattle, etc. Biodegradable waste basically consists of organic waste.

What is a Biogas Plant?

A biogas plant is basically a plant or a big container where the biogas is produced. It consists of two major components. 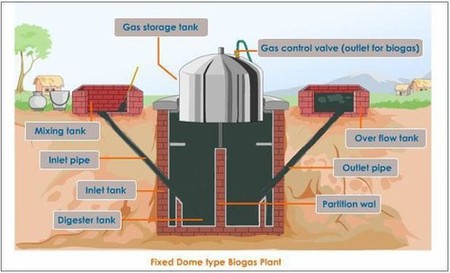 The biodegradable waste can be considered as the raw material to produce this biogas. Along with these waste products some anaerobic bacteria or micro-organisms are also put into this biogas plant.

These anaerobic organisms can survive without oxygen, and they digest the organic waste material.

This is a naturally occurring procedure in every soil but is synthetically done by adding the anaerobic organisms in the biogas plant. This anaerobic digestion is considered as the primary principle of how the manufacturing of biogas is done.

The basic setup of a biogas plant will involve 3 main things. The first part will be the inlet part of the biogas plant from which the organic waste matter and anaerobic microorganisms will enter the chamber.

Then comes the chamber itself where the anaerobic digestion takes place. The third part is the outlet portion in which the biogas is collected.

The major step of biogas production after putting all the materials together in the biogas plant is the anaerobic digestion. In this process, the anaerobic bacteria will breakdown all the carbohydrates present in the organic waste material.

Here, all the complex organic waste is broken down into amino acids, carbon dioxide, ammonia and hydrogen.

This biogas which is produced can be heated to produce energy therefore, can be called as a fuel.

This gas can be used for different purposes like cooking, in industrial areas, etc. This biogas fuel can convert the gaseous energy into electric energy therefore, adding to its uses and applications.

After the biogas is produced and its uses are defined, it leaves behind the organic waste i.e. the leftover material after the production of biogas.

This leftover material is often called as the residue slurry. This material is considered as a very good organic manure that is the organic fertilizer for the agricultural purpose.

Different types of Biogas Plants and their Applications

There are different types of biogas plants depending upon the use of the biogas being produced. For example, there are biogas plants for domestic or agricultural use.

In this type, the agricultural waste at a household or individual level is used to produce biogas.

This biogas will be used as a fuel for cooking and hence, replace the primitive techniques for cooking which generally consist of a gas stove and used of dried wood logs to create fire.

The use of biogas replaces the use of these primitive techniques. This will in turn reduce the use of the natural and non-renewable resources like wood which is depleting at a very fast rate due to deforestation.

In the Industrial Field

It will collect all the biodegradable waste from a large area and then treat it in this biogas plant.

The commercial biogas plant can also be used by an industry to produce biogas and then use this biogas to produce electrical energy from the gaseous energy.

Usually the constructed biogas plant is used by the commercial industries as they require a biogas plant of higher biogas producing capacity.

In the Urban Areas

Recently the use of a biogas plant was also promoted in the urban areas specifically at a household level.

Here it was advised to the active participants to use domestic small-scale biogas plants to produce biogas from the kitchen waste as well as any garden waste if available.

This will produce biogas which can be used to replace the LPG (liquefied petroleum gas) which is provided by the municipal corporation.

As we all know vermicompost will consist of earthworms that will produce a nutrient rich manure for the plants.

Therefore, using the vermicompost technique for the already nutrient rich manure is recommended if possible. But this concept is still under observation and research.

The next application is of the liquid slurry formed along with the solid manure. Whenever a biogas residue is formed it is generally the mixture of liquid as well as solid waste material.

This mixture is separated and the liquid portion of the waste is used as a replacement of water for the irrigation purpose.

The liquid waste is also very nutrient rich and is considered as a medicine for proper growth of the plants. This waste basically contributes the water content as well as the nutrient content thus, being very useful for the agricultural occupation.

Biogas and its manure are so far considered as a very useful and successful recycling technique which allows all sections of the society to attain its benefits may it be rural or the urban section.

Therefore, it will be a step in the right direction to learn about proper waste management technique and apply this biogas production technique for our biodegradable waste materials.