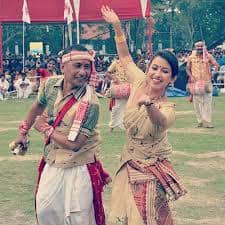 India is a country where majority of the income for the rural population comes from agriculture. That’s right agriculture plays an important role in the lives of Indian rural population. Almost 70% survives on the modes of agricultural way of living.

Festivals in India are a means of thanking the Mother Nature for the same purpose. It is obvious that Mother Nature plays an important role in the production or yielding of the produce or the harvest. And so, the celebration or observing the festivals such as Bihu is a way of people marking the beginning of the harvest season, it is a means to thank the Nature for being so kind and fruitful.

The festivals of harvest like Bihu also means that they, the farmers who shed their blood and sweat working in the field can now rejoice. Now they can bear the fruit of their labor. This festival gives immense joy to the farmers, the workers who worked day and night in the field, and even their family.

In India it is seen that the families which belong to the agricultural side of the occupation also contribute equally in the process of yielding crops. The festival of Bihu also marks the celebration of the New Year according to the Hindu solar calendar.

According to the Hindu calendar the New Year does not fall on the 1st of January as it does according to the Gregorian calendar. It falls somewhere in the month of April or March, and that is when the majority of Hindu population of India celebrates the New Year.

The festival is celebrated sometime around April. If we go by the agricultural time of the year, this time of the year is when the farmers harvest their fully processed crops and sell them to the markets to earn a fortune. So, in all this a time of joy for the farmers in both ways.

Although all of them hold a special place in the hearts of Assamese but the one celebrated sometime around April is said to be the most prominent amongst them all.

The festival of Bihu, all three of them, signify the celebration of the beginning of the New Year, one of the Bihu that is the Bhongali Bihu is celebrated to enjoy the hefty feast organized by the people of Assam.

And just like that the other two Bihu too signify of great importance. They mark the beginning of the New Year, the advance of the season of spring and the prosperity of the harvest season.

As it has been previously mentioned that the festival of Bihu signifies two of the most prominent things, and those are celebration of the New Year and the yield to the hefty crops. And so, for the people in Assam, it is a merry making time, and this merry making period usually lasts for about 7 days.

Seven days are the minimum number of days that the celebrations must long, and it is all justified considering there is not one but two occasions to celebrate.

The celebrations usually consist of what a New Year celebration must require. There is feast, gifts exchanging, decoration of the houses, inviting people over to one’s house for prayers, and of course the preparation of sweet delicacies that are mainly prepared during the festival of Bihu.

The celebration starts with worshiping of the animals that are involved with the farming such as cow. As they play a significant role in farming and in India, cow is considered as a holy animal so much that it is considered as the boon from gods, so cleaning the cow, and its home that is the cow shed, is a must.

The cow when washed up properly is then garlanded with beautiful flowers and is marked with vermillion. After that a special meal is prepared that is especially prepared to feed the cow.

After this process, next comes the cleaning of the house, the entire house is washed or cleaned, some even paint it to bring the life back to it, it is then decorated with lights, and a beautiful rangoli design is drawn on the floor. People mark the New Year by wearing their new and best outfits, and enjoying the feast.

Now comes the crucial part of any festival, the delicacies that are prepared during the time of festival. Sweets such as ladoos, rice cakes, and stuffed dumplings are made in almost every house. They are made in abundant so that people can give some to their near and dear ones, in order to share happiness and togetherness.

The aura of the festival is filled with never ending smiles and happiness. This was all about the personal or family traditions. It is evident that no festival is complete without involvement of some kind of gathering. And by gathering, it means that celebration of the festival of Bihu with some songs, and traditional dance.

Traditional dance and songs are performed by the people themselves in which they all participate. There are some specific songs as well as dance that are mainly prepared for this very occasion. Everyone takes part in this and marks the beginning of a New Year and a new chapter in their lives.

These countries too mark the celebration of the harvested crops and the fertility of the land and the crops. The dates or months of celebration however may vary but the essence of the observance of the harvesting festival is found to be pretty much the same.