Which is the biggest railway junction in India?

Howrah junction is the biggest railway junction in India. 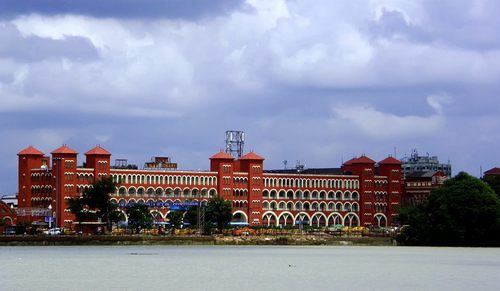 The Howrah junction is a landmark station in India that provides railway connectivity between Kolkata and Howrah points. The junction is a very huge one; it has almost 23 platforms in the entire station.

The number of trains, especially passenger trains that traverse the platform every day range between 22 to 23. So, one can imagine the huge bandwidth of trains that the station has to manage every day.

On the eastern side of the country, this junction is one of the biggest junctions, almost keeping 1220 stations in the loop.

Be it the trains that start from here as a terminal point, whether the ones that pass through the station as an intermediary one or considering this as a final destination, many trains meet the junction in some or the other form and hence considered a hustling and bustling station full of activity throughout the day, 365 days a year.

The workforce employed in the station is equally geared up to meet the operational requirements of the station, and they are well employed by the staff.

The railway platform has an astounding 25 tracks to handle the huge train traffic throughout the day. The region falls under the eastern railway frontier and south-eastern railway zone.

They are the main operating zonal heads of the Howrah station. Some of the prominent railway lines on this stretch are operated between Howrah and Delhi, Howrah – Nagpur and Mumbai, Howrah to Chennai and Howrah to Allahabad and continuing till Mumbai.

Thus, the station provides adequate connectivity to all the major parts of the country.

The history of the Howrah railway station

The history of the railway station is very significant. It was started in the year 1854 by the East India Company. So we can simply understand that it was under the supervision of the British that the significant landmark in country was constructed.

It is surprising to note that in those days, the station was constructed at an overall cost of 2,50,000 rupees. Such was the cost-effectiveness in those days and it is simply good to note that the value for money was equally high and was worth it.

The British employed Hasley Ricardo to build the Howrah station that we see today. When Hasley designed the station for the first time, he constructed around 15 platforms then.

Even today we can see the initial plan of the railway station that operated with 15 platforms. It is very much functional even today and to accommodate more number of trains and keeping the future in sight, the station went in for an expansion drive.

As part of the expansion drive, 8 new platforms were added to the existing railway station in the 1980s era and the southern part of the station saw massive infrastructure improvements as part of the drive.

The year 1992 saw many new implementations near the Howrah junction. Previously designed tram line facilities were abruptly discontinued in the year 1992 since the tram lines began to be used for non authorized purposes without consent.

Hence, the government began to realize that the tram lines were unfit to be integrated into the Howrah station and used it for other purposes like using it for underpasses.

The railway museum constructed near the railway station takes us down memory lane and one can recount on how the station was developed into a fully fledged one, how improvements were made to the old railway station, etc.

Services offered at the Howrah junction

The eastern railway frontier has its headquarters at Howrah junction. The operational plan as on today can be described below.

Electrification of the station was another huge project and the government took massive steps to handle it with utmost care.

The entire project was undertaken by the government as a part of the electrification project carried throughout the country.

The platforms from 1 to 15 that were designed by the British and were the only modes of operation till the 1980s were further expanded post 1980.

So, to have better clarity of what already existed and what came up into the new model, certain protocols were introduced in the nomenclature system. Platforms from 1 to 15 came under ‘Terminal 1’.

So, anybody could easily associate that the earlier railway lines, the older ones were all found on Terminal 1. The operations of Terminal 1 were further categorized and the local trains of both eastern and south-eastern railway were clubbed under Terminal 1.

With further thoughts, the long distance trains of the eastern railway were also clubbed under the same terminal. So, in one straight shot, it catered to 3 different types of railway traffic.

Next in the block are the newly designed platforms, post 1980, from platform 16 to 23. These railway lines were clubbed under Terminal 2.

They were specific to long distance trains of the south-eastern railway and since the traffic on this part of the loop is heavy, the terminal was exclusively designed to cater to that particular rail traffic alone.

The Indian railways are geared up in technology and provide good Wi-Fi connectivity at the station.