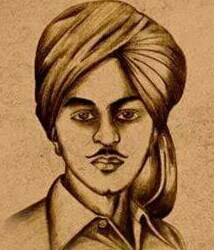 Bhagat Singh was one of many Radical nationalists that surfaced during the Indian freedom struggle as a result of tremendous disillusionment of the non-violent armchair politicians and moderate nationals.

He took to violence for the furtherance of a good cause and is remembered even today for his acts of valour and his sacrifices for the nation.

Bhagat Singh was born in Banga Village, in Jaranwala Tehsil in Lalipur district of Punjab province of the British Indian Empire. He was born in the year 1907 on the very day his father, Kishan Singh was released from prison. Not only Bhagat Singh himself but his family too had been actively involved in the Indian Independence Movement. Even his forefathers were warriors in Maharaja Ranjit Singh’s mighty army.

His family was quite an unorthodox one and did not send admit him to the Khalsa High School in Lahore as was the norm those days as his grandfather never liked the loyalty of the school officials to the British Government.

His mind was moulded to do what he is known for today at a very young and impressionable age, when in 1919, the 12 years old Bhagat Singh visited the site of the horrific Jallianwala Bagh Tragedy where thousands of unarmed innocent Indians were brutally murdered by the British soldiers tricking them into an enclosed area with only one exit that was blocked. He also witnessed the killing of thousands of innocent unarmed protesters at the Gurudwara Nakana Sahib in 1921.

Singh was earlier a true believer of Mahatma Gandhi and regarded his methods with very high esteem. However, seeing the prevailing status quo, and the failure of the moderate nationalists, he took to violence and believed it to be the only means of bending the cruel and unjust British Government.

He was also inspired by the perpetrators of the famous Kakori Conspiracy Case – namely Chandrashekhar Azad, Ram Prasad Bismil and Shahid Ashfaqulla Khan. He was so dedicated in his cause for the nation that he even refused marriage, saying

“My life has been dedicated to the noblest cause, that of freedom of the country. Therefore, there is no rest or worldly desire that can lure me”.

Singh had also been involved in the spread of revolutionary nationalist ideas through print media, particularly through the Urdu and Punajbi newspapers. However, to avoid the possibility of arrest as much as possible, he wrote under pen names like Balwant, Ranjit, and Vidhrohi. He also served a brief stint writing for the Kirti journal.

Bhagat Singh rose to prominence as a revolutionary trying to avenge the death of a well-known revolutionary activist, Lala Lajpat Rai, who was lathi-charged leading to subsequent death with orders of a British Offiicer, J.A. Scott in 1928, following which Lajpat Rai succumbed to his injuries.

Singh, along with Shivram Rajguru, Sukhdev Thapar and Chandrashekhar Azad, a conspiracy was floated to avenge Rai’s death. However, mistakenly, the group shot another British Officer namely Saunders. This created huge uproar and many Indians even dismissed Singh’s ideology of violence.

After this incident, there was a huge search operation inducted to nab Bhagat Singh and his associates of the Saunders Killing. Bhagat Singh had taken disguise, shaving his hair short and dressing up in Western clothes. Devi and his infant child accompanied them which made the trio look like a normal couple.

Rajguru accompanied them as their servant and carried their luggage. From Lahore he bought train tickets and passed unrecognized to Kolkata. Rajguru however went to Banaras. This famous incident is often referred to as the second Lahore Conspiracy.

On April 8th, 1929, Bhagat Singh and B.K. Dutt threw bomb in the Assembly Hall to open the deaf ears of the British Government following which Bhagat Singh was easily captured and taken as a ‘political prisoner’.

After this started the long and famous Lahore Conspiracy trial and everyone criticized the revolutionaries. Sukhdev and Rajguru responded as:

“We hold human life sacred beyond words. We are neither perpetrators of dastardly outrages nor are we lunatics as the Tribune and some others would have it believed. Force when aggressively applied is violence and is therefore morally unjustifiable, but when it is used in the furtherance of a legitimate cause, it has its moral justification.”

In the famous trial, B.K. Dutt was defended by Asaf Ali, a leading lawyer, but Singh defended himself.

The trial was an extremely long one with lot of divided opinions, finally external and artificial influence was used from within the British government to sentence all three – Bhagat Singh, Rajguru and Sukhdev to capital punishment. The execution by hanging was to take place on 24th March, 1931. But it was brought closer by 11 hours and the actual execution took place on 23rd March, at 7:30 p.m.

As per the norm, each execution had to be undertaken in the presence of a magistrate. However, no magistrate was willing to supervise the execution. As a result, a honorary judge was brought in to sign and supervise the execution. In fear of unrest, the bodies of the three revolutionaries were smuggled from the back of the jail, breaking a wall and then cremated secretly. The ashes were then thrown into the Sutlej.

Bhagat Singh with his acts of valour also created a huge uproar abroad where people know him to be the fearless Indian.

The activities of Bhagat Singh as well as his fellow revolutionaries in a period where there was no mass struggle, helped in making the people aware of the self-sacrifice and courage required in the struggle for independence. Taking their exemplary dedication to their motherland, we should imbibe this enthusiasm and do our bit for the country so that India can shine in its full glory as the ‘Golden Bird’ that I was once known as.