Respected Teachers and my fellow friends, today I am going to speak few sentences on “A day at the beach”

Beaches are the water of the seas when it comes to an end. The water come and mixes with the land. It brings with itself sands and other items.

Beaches are formed by the sands brought in by the seas. The sands get built up day by day and the beaches develop slowly. Beaches are excellent places of human interaction and activity. Beaches form the center point of tourist attraction. Not only tourists but also sellers.

I had an opportunity to spend a day at the beach. It happened when we went on a trip to Goa. We were taken to Goa as an educational trip from the collage.

The nearest beach from our accommodation was Benaulim beach. It is a beach less crowded. Hence it was good for college students like us who would make a lot of noise.

Morning was the time when we went for a bath at the beach. On reaching the beach we saw the crystal clear blue water rising and down the horizon.

We saw the golden sands shining like little pearls in the sunlight. It seemed as if the beach was calling us to come and enjoy its splendor.

We ran across the beach. On the way we saw strict life guards standing and guarding the coast. They had sharp eyes which were always on lookout, always in search of some danger. Somehow their presence made us feel secure. Any danger, one call and they would be there.

We kept our shoes at a side and ran in the water. Then came endless jumping and thrashing in water. There were surfers too.

Riding on high waves deep in the water. We were tossed to and fro by the lashing waves. There were times when the water covered up my head and I was completely submerged in water. The water was very salty in taste. 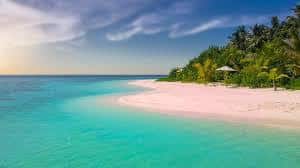 After coming out of the water we indulged ourselves in building sand castles. I built one with much effort, but it was unfortunately swept away by the waves.

So, I shifted my site to place farther away and started building another one. In the meantime, my friends had built a few more masterpieces. One built a car, another built a sculpture.

Few others built castles. After that we were all very tired.

There were a lot of shops along the coast. Some sold knick-knacks made of sea shells. Things such as cowrie shell necklace, bracelet, earrings were available in almost every shop.

Other shops sold snacks, tea and sea food. There was an authentic line of sea foods, from squids to sharks, from starfishes to eels to oyster, everything was available to excite the taste buds.

We had a whole meal of chili pepper fried squid and creamy oyster sauce soup, and believe me or not it tasted like nothing that I could have ever eaten before.

The taste was so different and unique. I was a bit uneasy before having the seafood but after tasting it once I liked it so much that I didn’t stop until I finished it full.

Later we hired bicycles to roam around the beach. We saw foreigners basking in the sun tanning their sun, coolly sipping a lemonade.

We saw kids playing in the water just like we did. It was fun cycling around the beach. One could feel the breeze striking the eyes and hair and enjoy the beauty of the scenes which nature presented.

Night brought in another phase of the beach. The water slowly changed its color along with the sky. The water first changed it color from blue to yellow then to orange and then red. Finally, it turned dark red and black. It was amazing to see these color changes.

As if nature was taking its own time to paint the water according to its mood. When finally, the night fell we set up the fire for our campfire.

We made wonderful tandoor on the smoking fire. We burnt the chicken added spices and ate, and it was heavenly. After eating we took some time to walk along the beach.

The sound of the waves hitting the shore was pleasing to the eyes. It was pleasant to walk in the light breeze.
The night at the beach was filled with splendor. The starry sky and the dark clouds blended well the water. You cannot see the horizon.

The horizon blends in with the water. The sky and water seems to be one uniform body. Only the waves can be seen covered in white foam rising up and down.

My day at the beach was a wonderful one. It couldn’t have been any better than this. The day was complete and priceless. I would seriously look forward for another day such as that. Beaches are truly a gift to mankind.