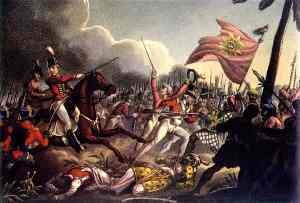 The battle of buxar was fought between British East India Company led by Hector Munro and the combined join forces of three Mughal rulers- Mir Qasim, the Nawab of Bengal; Mughal emperor Shah Alam II and the Nawab of Awadh Shuja-ud-Daulah. On 23 October 1764, the battle was fought at Buxar which is in Bengal and located at the bank of river Ganges River.

This battle was actually an outcome of the clash between British east India company and Mir Qasim the Nawab of Bengal.

Mir qasim was the most efficient Nawab of his time. He ran his administration quite effectively without getting influenced by Britishers. He suppressed the rebellions of Bengal and Bihar. He transferred his capital from Murshidabad to Monghyr.

He was becoming more and more powerful by strengthing his army. He wanted to stay away from Britishers that’s why he shifted his capital to avoid their interference. He also made proper arrangements for the manufacture of fire arms at his new capital. This attitude displeasured the Britishers most.

They saw it as a beginning of rebellion. Mir Qasim stopped the britishers from misusing the dastaks which was an important source of revenue for the Mir Qasim. This added fuel to the fire. And finally the last nail in the coffin was put when Mir Qasim put all end to the company’s trade of salt and bettel leaves.

The company was trading from his territory in salt and leaves without paying any taxes. This created fury among the Britishers. Few other measures were taken by him to stop trading of Britishers in his area. He actively promoted his own business. This provided enough reasons to Britishers to demolish his reign over that place.

British company tried hard to keep a check on him but Mir Qasim wanted to rule independently. A quarrel started among them. But this was just a beginning of the war.

Events of the battle of Buxar

Importance and aftermath of Buxar battle

The battle to rule over the Bengal which started at the success of Battle of Plassey in 1757 had come to an end. This battle also ends the puppet Nawab era which was started after battle of Plassey.