Essay on Barack Obama (The 44th President of United States) 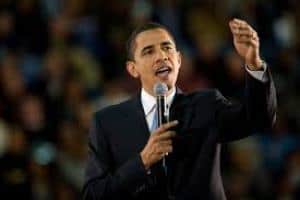 World leaders, the famous leaders of yesterday and those of today have that enigma surrounding them which makes them truly magnetic and dynamic personalities.

Everyone in the world looks up to them for their larger- than- life image and it is their achievements that speak for them.

Great leaders from all over the world have visited our country and made us proud by strengthening ties with our motherland.

Students are given a chance to interact with such leaders on many occasions and learn about their high level of commitments and dedication in their chosen fields.

It is only with strict determination and a die-hard attitude that these leaders have achieved such feat for themselves.

Hard work sure pays off and the initial days of struggle and learning are something that every person should imbibe as part of his learning.

Education plays very definitive and significant roles in a person’s life. This fact is doubled up in case of great world leaders. We have many great titans who ruled the world and showed their strength.

Some of the common traits in all these great names are their unquenchable thirst for knowledge and higher learning and the highest level of education they have received.

Their educational backgrounds and the value systems they were part of, taught them life lessons and in the process, they discovered they could do something huge for the world.

They played significant leadership roles at many levels and they were able to accomplish their dreams.

They stepped on hurling stones, yet were able to stand firm on their ground, out of their own efforts.

It’s not every day that we get to meet great personalities and when we read about these great lives, we come across many such qualities they had, which are common in all of us, yet they have extraordinary lives that set them apart from the ordinary.

Rich, famous and determined, these people balance personal lives with their political careers. What sets the difference is, they have time for many other things apart from their mainstream lives and they are the constant faces of the media.

The media puts its focus all time on these great world leaders and the world watches them over.

Great lives with great stories and great inspiration for all of us to learn from, every leader has a unique story to tell, their personalities speak volumes and their image is something that is greater-than-life.

They lead extraordinary lives and live life king-size with their passion for hard work and never dying determination.

Barack Obama was the President of the United States of America from the year 2009 to 2017.

He was elected President from the Democratic Party and served as the 44th president of the US. Obama was born on the 4th of August in the year 1961 at Hawaii.

His wife’s name is Michelle Obama and has two beautiful children, Malia Obama and Sasha Obama.

Obama has the proudest feather in his cap of being the first African American president of the US. Obama’s father was an African, whereas his mother belonged to the region of Kansas.

They did not stay together for a long time, and when they separated, Obama’s mother married for the second time and moved to Indonesia.

Obama lived there for a brief period till his grandparents brought him back to Hawaii where they lived and he was raised there with them.

In 1983, Obama finished his college studies from Columbia University and worked for a brief period of time.

He joined various kinds of jobs and got experience working in various fields and exposure to various allied jobs and skills.

Before long, he understood his inclination towards legal studies and decided he wanted to have a formal degree in the same field.

Therefore he enrolled himself at the Harvard School of Law and completed his studies by 1991. After that, he became a formal legal practitioner.

By 1996, Obama had become very famous as a very good orator and his speaking skills were recognized by everyone. He was appreciated for being a very good and diplomatic speaker who could deliver political lectures and handle political debates at high ease.

So, he decided to contest the Illinois State Senate in the year 1996 and was successfully elected to the Senate. After working for three years at the US Senate, he decided to jump higher and this time he chose to contest for the Presidential Polls.

He was surprisingly leading in the election run up to the Presidential poll and won the election. He took over charge as President of US on January 20th in the year 2009.

His determination and popularity worked wonders in his favor and he was re-elected for the second term of president.

It was during his rule that the most wanted terrorist of the world, Osama bin Laden was assassinated and every credit to this military achievement goes to the Obama government rule.

It was in the year 2011 that Obama stepped up actions on the militancy to conquer the most wanted terrorist and show him the door of assassination.

It was due to his tough stand and military intelligence that Osama Bin Laden was finally captured by US militants and was killed to death on the day of May 11. During his tenure, the US army also had to face war with the Iraq troops.

Reforms During his Tenure

The greatest achievement of Obama lie in his welfare measures to help the poor and make healthcare accessible to all sections of society.

The primary focus of the Obama government lie in the special initiatives and schemes he devised for the common layman, keeping him in the loop while taking major decisions and citizens of US thoroughly applauded his special initiatives.

He won many a hearts for making major reforms in the healthcare sector and brought into rule, the Patient Protection act in the year 2010.

Health insurance was another sector that Obama government made major changes and brought good reforms to help the common man.

The economy was under normal progress as reports indicated and the major reforms that Obama seemed to have made in this sector was that he brought about reforms in the tax system. The main intention was to set the economy driving.

Barack Obama is a very good basketball player and basket ball is also his favorite game. He has written many books, reading is his all time favorite hobby.

He is a very tall personality, he is 6 feet and 1 inch long, and he is an avid basket ball player and a favorite among many.

He received the Nobel Peace prize in the year 2009. Obama is known to have a penchant for novels, it is reported that he thoroughly enjoyed reading all series of harry potter and has not missed even a single season.

President Obama has even written an autobiography of his own, called ‘Dreams from my father: A story of race and inheritance ‘and it was published in the year 1995.

The book is reported to have been translated into nearly ten languages till date. Obama went a step further and released an audio version of the book. For this rendition, he won the Grammy award in honor of the best-spoken word album.

Barack Obama’s leadership qualities have inspired many young people from around the world. They have taken him as an inspiration and learnt from his practical approach towards life.

Obama is said to have the values he received from his grandparents nurtured his personality and helped him build an outgoing image for himself and holds all values dear to him even today.