Essay on Autobiography of a River Ganga (650 Words) 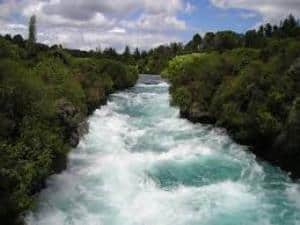 It all began with a single drop of rain. The first drop of rain to fall on the mountain crater. As the rain continued to fall heavily, the water overflowed from the depression in the side of the mighty mountain.

It overflowed into a long crack nearby, a crack that seemed to run all the way down the mountain. The water followed the crack, winding with its curved, gushing down at full speed. A river was born.

A glimpse to my past

It must seem far-fetched, since I’m in a bottle. But I gotta tell you, I was that river. Part of me anyway. How did I get into a bottle? How did someone as ancient as me find my way to you? Let me tell you a story.

Continuing from where we left off, I gushed down the cracked pathway, it somehow seemed endless. As I flowed through hills, plains, plateaus I looked around, the animals, the monstrous creatures; towering lizards and beasts.

There was no sign of man anywhere, like they were hiding. I would often see those beasts come to the riverbank to drink my water. I then realised that I sustained life, which life depended on me. As I gushed further and further away from the mountain, instead of feeling homesick, I felt closer to home.

I did not understand it then, but it felt like I was on my way towards home. I travelled through the land, watching, observing, as life prospered. Where was this path leading me? I got the answer sooner than expected. I saw a larger, humongous body of water ahead. It felt like home.

That, my best friend, was the ocean. As I joined the ocean, it embraced me, took me in, and rejoiced that I had arrived. It felt like a fateful reunion. But my stay was short, as soon, I started to float.

Evaporation had taken over and I was rising higher and higher into the sky. I formed a raincloud, the north wind blew me towards the mountain, and that was the beginning of the eternal cycle.

You might think it’s tiring, doing the same routine over and over again. But it’s not, since every time, I see something new. I saw the birth of these giant animals.

I saw there evolution. And I saw their death. Everything seemed dull that day, as if the earth itself knew what was about to transpire. Then it happened, a great fireball fell from the heavens. It destroyed everything, plants, animals, and the land.

There was complete darkness on earth, even during the day, smoke and dust everywhere, choking the killing the survivors. But as the dust of death cleared, I saw that there were still some persistent life forms, too stubborn to die.

They emerged, prospered. They had nothing to fear, the world was theirs now. The era of humankind had begun.

Humans prospered at a staggering pace. They built settlements along my banks. Groups and groups of humans started living together.

They hunt together, ate together, celebrated together. Also they soon revered me as a God; they worshipped me, offering me sacrifices I didn’t want. But it made them happy, so I was alright with it. They started to build bigger houses, their work getting faster too.

Soon, they forgot all about the time before, started to abuse my resources. It was the industrious age that brought my downfall.

Factories let their sewage and liquid waste into my clean water, inconsiderate of the fact, that down below, others humans used me to drink water. I started to get more and more polluted, getting choked in the chemicals and waste.

It became tougher for me to move towards home. I wanted to somehow tell them, that they were killing their own planet.

I tried sending them warnings, overflowing my water into their city, but they never seemed to listen. It took time, but they came to their sense and started taking measures to preserve me, purify my water, and clear my path towards home.

I’m almost as old as the earth, older than life itself. But here I am, talking to you, through a tiny container. It is to make you understand, that the earth is not meant to be abused, but loved. I hope you spread this message across to your generation.