Hello readers! This is me, Ethan. I am the ruler of the forest. My area belongs to me. All beings are subordinate to my existence. I am the lion.

I am the majestic four legged creature who is treated like a royalty amongst everybody. I am looked up at with fear and respect.

I am unstoppable. It gives me immense pleasure and happiness to see my prey cowering in fear at my sight. I am the ruthless master who kills without explanation.

I am immensely proud of myself for my looks. People say that my beauty is unparalleled and the grace of my body movement is just breathtaking.

I am the brightest golden in colour- the most elegant and beautiful colour your eyes will ever see. I have an ochrish golden heavy mane flowing from my face.

My mane is actually better than all my counterparts who don’t have any dressing sense. My eyes are bright as day and within them shines a dream of ruling the whole world. 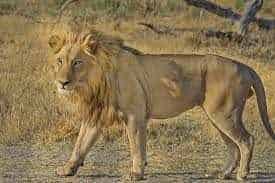 That world would be mine. My reign of terror will prevail in the complete world and all brings will bow down to my imperial presence.

I am the regal Asiatic Lion, the most powerful of them all. I was born in the forest of Gir. My home is a beautiful den which I built with the help of my own caveman abilities.

I had ever laid eyes on. She was painstakingly beautiful. Her name is Alice.

Immediately, I thought of courting her. She was also happy with this proposal.

Today, we are the parents to two cubs who just make my day whenever I see them.

I live with my small family in my hideout. My family is everything to me. But I make sure to protect and to love them at all times.

I have many other abilities which distinguish me. Our community mostly lives in Savannah habitats. Savannahs are dry and dreary. But they are just perfect place for us to reside.

I can camouflage my skin with the environment so well that it is practically impossible for my prey to sense my presence.

This leaves me at an advantage over my prey and the joy I feel after hunting down my prey is so heavy that I may actually drown in it.

A normal day in my life starts at the dawn. Since I am superior to all creatures, it makes it easy for me to turn down my prey as those cowards cower in fear even before they are attacked.

After feeding my family, I spend some more time with them before going to meet other lions.

While some of them are always at animosity with me but there are some who are very friendly towards me.

Everything was going perfect until that one day my destiny changed for bad. Clouds were growling all over the sky in their full force.

Due to this, no animals were out there for me to prey on and feed to my family. I kept on wandering aimlessly in the jungle to find some food to feed my family.

Immediately my nose caught the scent of a goat. I turned to follow the origin of the scent so that I could catch my prey.

That is when I spotted my prey- the weakling, who was going to die to satiate my hunger. I stalked towards him.

When I was in a radius of 2 meters from him, I immediately lunged for him. As soon as I took a jump, I noticed my paw getting caught up in a rope.

Then it hit me. It was a trap. But who could be behind all this. All I saw was red. My rage boiled in my veins. I was so ferocious that I tried my best to escape out of the net that trapped me.

Immediately, I smelled humans in the environment. I knew it was their handiwork.

They are cruel and I hate them. Why can’t these humans let us animals rest in peace for once.

I couldn’t move from my position. Both the men were armed heavily.

Now I feared the worst. So ironic, isn’t it? The creature that instills fear in all beings fears humans.

Well, they say, karma comes back and bites when you least expect it to. I guess my time had come. I noticed a man bringing a needle near me.

I tried to grapple out of the net by using my claws but was not successful to any avail. He then drugged me. It was all black. I laid peacefully into oblivion.

The next time I woke up, I could not recognize my surroundings. My skull was still throbbing with whatever drug they had injected me with.

But I was determined to get out of here, to my family. Oh my God!  Was my family safe and sound? Bile rose in my throat.

I hope they do not fall prey to the predator’s ways. I tried to break open the cage but it was hard as a rock. No amount of any power could even bend those iron grills.

I was trapped. I growled heavily in anger. I sat down, waiting for someone to come in.

Some days passed by. I had learnt that I was brought to Calcutta. I was to work in a circus and I had no option but to give in. I was trained by the ringmaster in acrobatics and gymnastics.

It was exhausting. They did not give me good and plentiful foods. I was only fed that much as to be kept alive.

My life became miserable. I missed my family but there was nothing I could do to escape these people. I was tamed to become calm but my rage kept boiling in my blood.

Now see where I am today. Just a few days ago, I used to wander in the forest carefree and I had all the freedom in the world.

But now my world has contracted to the four walls around me, from where I would never be able to escape.