A boat is a fish shaped vehicle used for transportation in water. Humans have been using boats from time immemorial for their usage Web. Boats are used to cross seas, rivers and oceans. The first boats were rowed with the help of manpower. These canoe kind of boats are still in usage even today.

‌Boats come in various shapes and sizes and different boats are designed for different purposes. Motorboats are powered by the power of a battery or electricity. They are used by humans to travel on water in a faster speed. Then there are row boats, which are specifically designed for canoeing. Life boats are used to save lives of people.

Even ships are based on the same design as boats- tapered in the ends and wider in the middle. The concept of houseboats still fascinates people all over the world. Houseboats emerged as a need for the people living in shallow waters but today it has also emerged as a tourist attraction. Ships are just a huge version of boats- more capable and stronger built than the boats.

If I were a boat, I would like to be the boat of the boatmen who was caught in a dilemma as to ferry the chieftain and his lady across the Lochgyle sea. That night was disastrous. It brought death as a present for anyone who happened to cross ways with the storm.

I was neatly parked against the shore under the supervision of my master. I was just having a chat with other boats over a boating competition which was set in cards just three days from now. It would be an amazing experience. It is not just about winning but it is more about trying hard to win.

The sky became dark and storm brewed all over the mainland and the sea. I have seen the ruthless face of nature before a lot of times but this was nothing compared to what I have seen before.

The sea became vile with the hopes of a shattered tomorrow. It didn’t stop roaring. But in the midst of this storm, I noticed something. Footsteps were approaching me.

That was the sound of heavy boots. Probably my master had not heard those footsteps because he was a human and noise traveled through air for him. But for me, I was parked in the land which made it easier for me to listen to sounds as noise travels at a faster speed in solids. 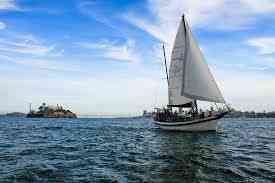 I was waiting for whoever it was. I didn’t understand that why did those people want to walk directly into the eye of the storm. Even with my master, I felt unsafe at that moment because of the devilious embodiment the nature had acquired.

Suddenly, I saw two people approaching us. One looked like a chieftain and the lady who was very charming looked like a princess. Upon seeing my master, they immediately approached him with request and pleas to ferry them over the sea. My master was taken aback. It was a risky situation.

The duo didn’t seem to understand the danger they were putting the four of us in. We were safer on the land as compared to sea. After that they explain their story to the master. They tell him that they had run away from Lord Ullin, the ruler of Ulva. They further explained that both of them had run away from him because her father disapproved her marriage because of their social inequality.

According to her father, the chieftain belonged to lower ranks and he could not permit his daughter to marry someone of a lower stature. I was wrenched with the overwhelming situation of the lady. She was all tears. She was torn in between her lover and her father. The chieftain even offered my master 3 pieces of silver. My master knew it was dangerous to ferry me on rough waters like these.

I was not strong enough to bear this storm. I knew it. As they were talking, stomping of hooves and boots was being heard. This only meant one thing. The couple and my master had no option but to ferry me across else these men would take the chief away from the princess. I knew this storm will eat me up. But I was willing to give a chance to the couple. I didn’t want their love to die untimely death.

My master made it clear to the couple that the chances of survival are bleak and he is only doing it for the beautiful lady in front of him. He prepared me for the feat. I was unleashed into deep waters within no time. The couple held their hands and prayed to God for safety.

My master rowed me with full force but I could feel that our end was near. However further we went into the waters, the winds and the waters would lash out at us with a great force. All of us were drenched by now in the water. We were just praying that somehow we reach the other shore safe and sound.

Suddenly a wind struck me hard. A roaring wave engulfed my frame and pushed me into deep waters. I could feel all of us sinking. My master was ripped apart from my structure.

He was sinking in deep water alongside me. I could feel him struggling for air but he couldn’t get any. The couple was still holding hands as they wanted to live and die together. They were sinking but their love would always be alive.

As for me, I am just a boat. My disappearance won’t matter much to anyone. People will purchase a new boat and replace me. It is that easy. But I do have emotions.

Now I am lying struck in a cliff inside waters. I have nowhere to go. I am abondoned now. I live a lonely life with fishes and sharks around me. My structure has also become a place of visit for some fishes. My body has started rotting but I can do nothing in my power to save myself from this misogyny.