I am a banyan tree. The story of the birth of a banyan tree is quite interesting. Actually banyan trees are quite uncertain about their birth.

They are born out of seeds of banyan cones which birds eat up accidentally. It passes out of their excreta an if it is lucky enough to fall on a ground where the soil is soft and fertile then it will gradually develop into a tiny tree. 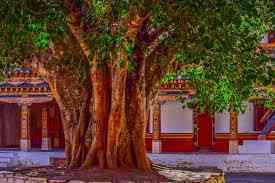 My memories about my birth is quite vague as it’s now 800 years past since I was born.

As for me I came out from the excreta of an unknown bird. I luckily fell on a soft soil by the side of a main road.

We banyan trees are known to be very durable, hence although facing the challenges of nature I survived.

Rural trees are those trees which are very old. They have survived hundreds of years. They have a very long lifespan.

Their numbers are few. And slowly rural banyan trees are becoming extinct. And the ones that are living are considered highly valuable.

You will see that under the boughs of some peddlers sit to sell their knick-knacks. Under some the rural drama is staged or the country singers sing their songs.

The stories of suburban trees are different. You have frequently seen us growing in the cracks of buildings or staircase or on a garbage heap or on a woodpile.

The fate of suburban banyan trees is quite unfortunate. They are terminated in the middle of their life span in some or the other way. In some places where their head touches the electric lines, their heads are chopped off.

Even underground they have to spread their roots quite cautiously because of the water lines that grow underneath. And if by chance some root happens to touches the water pipe.

Banyan trees of urban environment are way different from us. The Japanese people are short heighted people and they started this trend of making miniature trees called ‘bonsai’.

What they do it that they half-cut the roots and keep us half-fed and so we grow but our growth is not complete and we remain in a miniature form.

The lifespan of a miniature bonsai is not known to me but through guesswork I can say they certainly live more than us as they are taken care of, fed and allowed to growth. It has become a part of ornamentation.

Coming back to me i saw the first light of sun after taking my head out of the soil. The main road leading to the town ghat was beside me. Instead of negligence and rough weather i grew up to be a strong sturdy tree.

During my years i have seen many things, times of turmoil, time of joy, thanks to my memory i remember it all. Once i saw a bullock drawn cart filled with arms getting looted by some college boys.

Later came the news that some Indian students has attacked the British police. Once i saw a lady being dragged to the ghat by the other villagers.

It was a death procession. Her husband’s dead body was before her and she was crying profusely. They were taking her to the ghat to burn her along with her husband. Yes the ritual of ‘sati’ was prevalent at that time.

Other times i saw durga puja processions going in front of me. Luckily for me no electric lines passes from near my head.

During this time one more interesting things happened. Due to weathering of nature one rock’s exposed surface showed up near my roots.

People noticed it soon. They started worshipping it. Vermillion was smitten on it face and people can in clusters to worship it.

Soon many other idols started to be kept under me. I wasn’t cut although many other trees of my locality were cut due to this reason. 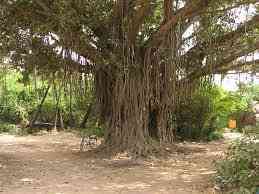 I also liked helping others. One day a very old man came walking in the blaze of sun at mid day.

He wanted some shade to rest. My boughs welcomed him. He sat there and fell into a deep slumber in the cool of my shade.

Later when he woke up i saw him thanking me. I felt very happy.

Another time one saddening incident happened. A thief took shelter in my boughs.

At night when I was sleeping I suddenly felt someone quickly climbing up my trunk using the creepers that hang. It was raining very hard that night and there were frequent thunders.He nestled himself in the upper branches.

I felt that he was carrying another weight as well. I had no choice but to give him shelter. That time I didn’t doubt he was a thief.

In the dawn he woke up climbed down and vanished somewhere. Later in the day I heard residents calling out in despair that a thief has robbed many houses.

I felt very sad that time at my in capability of resisting a criminal from using my shade for his selfish needs.

I have housed generations of birds, squirrels, crows, earthworms and moles. I have baby birds hatch out from their eggs to the times when they learnt to fly.

I have seen squirrels move about me and i also felt ticklish when their soft fur touched my trunk.

Luckily till now i haven’t been struck by any thunder bolt, neither has man chopped me off.

But my end is near as the road works department has decided to widen the road on account of the heavy crowd pressure on the ghat road on festival days.

Since my place is right beside the road i have to be cut down to allow for the broader street.

Still I am happy that i could stand the test of time and serve man at the times when he needed me the most.