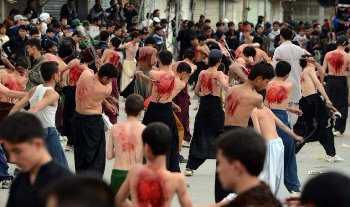 Let us first decipher as what Ashura means. And can we call it another festival for the Islam world or is there something more and different meaning behind it?

So, it is a well-known fact that the modern day Muslims are divided into two categories, and those two categories would be Sunni and Shia Muslims.

This topic we shall explore how the two categories came into existence? How the day of Ashura is celebrated or performed by the two different communities? And what rituals and rites are followed by them?

Ashura to be more precise should not or rather is not a festival. It is not like any other festival where the day is celebrated with pomp and show.

And it is definitely not a merry making day. But Ashura is more of a mourning day or Remembrance Day to be more precise.

It is the day where Muslims remember the grandson of Prophet Muhammad, Hussein ibn Ali. It more of an observance day.

Before the modern day celebration, this day of Ashura is celebrated as a mourning day by the Muslims all around the world.

As Hussein Ibn Ali died, it is to remember his death which was held on the tenth day of the first day of Muslim calendar that would be Muharram.

And so the tenth day of the first month of the Islamic calendar marks the day of observance of Ashura, which happens to be Muharram.

The Historical Significance of the day

The historical significance behind the beginning of the observance of the day of Ashura is not commendable.

It has a sad beginning where we will learn that the rise of power and command had taken over the devotion towards the god which should be the prime duty of a true Muslim.

The story depicts how deprivation of one small troop led to their death and that to a ruthless one.

The deviation from the noble path of service towards god and his teaching were lost in the beginning of this story which in turn led to the creation of two different categories of Muslims that we witness in the modern times and also the observance of the day of Ashura, the mourning day.

So, it all started with few of the Muslim leaders that were as mentioned hereby, Ubaydullah ibn Ziyad, Hussein ibn Ali and Umar ibn Sa’ad.

The former mentioned name was the new governor of Kufa, the second name that is mentioned here is one of the prominent figure who follows Imam and believes in the service of god or the almighty and pledges his devotion to him, and the last name mentioned here is the head of the army of Kufan.

It is worthwhile to mention here that all the incidents mentioned here had taken place in Karbala, which is now modern day’s Iraq. All these incidents led to the formation of the split and formation of two categories of Muslims.

There was a need for who would support which troop and who would carry on its own path and it so happened that Hussein first sent his messenger in order to negotiate and understand the situation, to Kufa but later he found that the messenger had been brutally killed in Kufa.

And so Hussein started his journey towards Kufa only to find out that the Imam has been forgotten and that the true devotion of god and his teachings had been lost in the way of the people who resided there.

This was not an easy journey for Hussein as there were many obstacles for him laid in his path that included opposition from the army of the Ziyad.

Hussein offered the Ziyad army to come and join them, but they refused and in turn Hussein was compelled to go towards left where he reached Karbala.

The Ziyad and his army were playing a double game here, they did not want to join hands with Hussein and his followers and they even cunningly stopped and barred them have the water from the water bodies of Euphrates.

And so we can see the past lost and power stricken Ziyad had restricted any chances of Hussein to win.

And hence took place the Battle of Karbala which was fought between Kufan army under Ziyad’s control and Hussein and his followers that had consisted of male followers.

The battle was fought from sunrise and would end at sunset. Hussein’s troop even though was small did not surrender easily to its opposition.

One of the major cause of the battle was that the Hussein troop which consisted of his followers, and had a total of 72 members that even consisted of men, women and children, were deprived of water from the only water source, it was done under the command of Ziyad.

The former were ruthlessly killed by the army of Kufa. After the murder of Hussein and his followers, the Kufan army took over the belongings of their.

Their wives were forced to give away their ornaments and their sister was taken by the king of the Damascus but she later was given the permission to come back to medina.

It was a ruthless war where the tents were set to fire, bodies were stamped by horses giving out a scene of obscene mercilessness. It so happened that this battle has been described as one of the gruesome event that went down the history.

How Sunni Muslim practices this day?

The Sunni Muslims observe this day entirely differently from others. They mark this day as a respect and perform fasting although it is not mentioned to be compulsory.

They treat the day as more of a peaceful observation and abstain themselves from any kind of public display in order to show their respect. This is a day for expressing gratitude, and feel blessed.

The day is marked as a savior where god saves its devotees from the impending danger by creating a path for them through the red sea and created an escape for them.

Hence this is rather a peaceful celebration for the Sunni Muslims who do fasting and express their gratitude.

How Shi’a Muslim practices this day?

Shi’a Muslims however do not follow the same practice as mentioned above. They observe the death of Hussein and his bravery with mourning and sorrow.

It is more of a remembering the tragedy and hence offering their condolences to the martyrs.

They perform acts to tell the story even have a public event where they express their sorrow through self-flagellations.  It is more of a day that they observe with grief. Parades are conducted to retell all the event that took place.

This day of Ashura holds a strong significance for the Shi’s Muslims than for the Sunni Muslims.