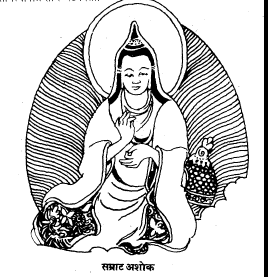 Ashoka Maurya was one of the greatest rulers of our country. He was born in 273 B.C. His father, Bindusara, was a powerful king of his time. After the death of his father, Ashoka became the king of Pataliputra (now Patna). He was a very good king.

Ashoka managed the affairs of his kingdom very efficiently. He was greatly religious and cared for the welfare of the people of his kingdom. Pataliputra flourished under his rule. People were very happy.

Maurya was greatly ambitious. He fought wars to expand his kingdom. It spread from Kashmir in the north to Mysore in the south and from Afghanistan in the west to Cuttack in the east.

He was the ruler of a vast kingdom. The state of Kalinga in Orissa refused to surrender to him. So Ashoka waged a war to overcome it. The war continued for many days.  More than one lakh people were killed and many more wounded.

His heart grieved when Ashoka visited the battlefield. Everywhere there was bloodshed. He made a pledge that he would never fight a war again. He became a devoted lover of peace and embraced Buddhism.

It was the turning point of the brave king (Smraat Ashoka), he taught, what is the benefit to win the state,  if there is no one to rule over it. By looking the battlefield, he got stuck and finally pledges that he will never fight.

Maurya sent his son and daughter to other countries to spread the message of Ahimsa and Buddhism. He carved out the teachings of Buddha on iron pillars.

He devoted himself to the service of his people. The brave king died in the year 232 B.C.