The word “Aryan” or “Arya” is a word used to designate an Indic tribe which migrated to India during the Vedic Period. These people referred to themselves as Indo-Iranian people and used the word “Aryan” as an ethnic name for their communal identity. It is said that these people believed that they were from a region named “Aryavarta” where their culture originated.

It is observed that the region “Aryavarta” got its name from the “Avesta” scriptures of Iran. Some scholars argue even today that the Aryans were a community that formed based on religion, customs, traditions and culture but not on the basis of race or caste. Based on some misinterpretations in the Rig Veda, the Aryans were considered to be a racial community.

According to some sources about the existence of the Aryans, the word “Aryan” comes from the Sanskrit word Arya, which means a “noble one”.

Are Sanskrit and Avesta similar?

According to the references in Sanskrit literature, the word Aryavarta (meaning: the residence of the Aryans) was the name of a north-Indian tribe, where the Aryan culture existed. According to the “Manusmriti”, it is the term used to define the region between the Himalayas and the Vindhya mountain ranges, and from the Eastern to the Western Sea.

During the 19th century, it was considered that the term “Aryan” was also shared by the Proto-Indo-European community. Based on these considerations that their origin was in the northern Europe, a 19th-century thesis which is abandoned in the present day, the word was found to have a racialist meaning. The Nazi racial theory has references of the term in order to describe persons corresponding to the “Nordic” ideal of the Nazi Germany.

Usage of the term in other languages

The term was widely used throughout the Indian Subcontinent with various alternative names/modifications. The Emperor of Kalinga, Karavela, during 1BCE, is referred to as an ārya in the regional inscriptions of the Udayagiri and Khandagiri Caves in Bhubaneswar, Orissa. The rulers in the tenth century were titled RajadhiRaja (the greatest emperor) of” Aryavarta”.

The term has been used in various Indian religions, mainly Hinduism, Jainism and Buddhism, as a title of honour.

Also, a similar usage is found in the name of Arya Samaj (the noble community).

There are instances of the word being used in the “Mahabharata” and the “Ramayana”.

Before the 19th century 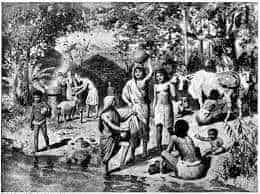 While the meaning of Arya is still, the origin of the word also is uncertain. There is still no proof found for the sharing of the term by the Proto-Indo-European community.

One of the meaning of the term ‘Aryan’ that was adopted into the English language was in the 18th century which was associated with the term used in some inscriptions and references, which also had the same meaning as that of the very oldest usage, i.e. the North-Indian language speaking people.

Thereafter, the word ‘Aryan’ came to refer to the languages of the Indo-Iranians, and the native speakers of the languages.

The usage of the term Arya has been found in ancient Persian texts. An existing inscription refers to Ahura Mazda as “the deity of the Aryans.

According to the inscriptions, the term has been found to be used 36 times in the Rig-Veda.

Apart from the term Arya, another term Anarya has been used in the Hindu Epics. The term Arya is used to describe a person who is ideal and the term Anarya for the person exactly opposite in behaviour.

As discussed earlier, in the Mahabharata, the terms Arya or Anarya are used to describe people according to their behaviour. It is considered that Dushashana was an “Anarya” since he tried to humiliate Draupadi.

The word Arya is said to be found in the major religious inscriptions and texts. It was applied to the saints or to someone who was purely and entirely spiritual.

In 1875, a saint named Swami Dayananda founded an organisation named Arya Samaj which meant the noble community. A great scholar –cum-saint named Shri Aurobindo published a journal with the title Arya (1914 to 1921).

The word Arya, is found to be very frequently used in Buddhist texts to portray a spiritual person. Buddhists refer to themselves as “ariyapuggalas” (Arya people). As per the Buddhist scriptures, the principles of Dharma and Vinaya are termed as “ariyasa dhamavinayo”.

The “Four Truths” are called the “catvary aryasatyani”. Meanwhile, the “Noble Eightfold Path” is called the “aryamarga”. In Buddhist scriptures, the aryas are the people who have the quality of virtue and follow the Buddhist rituals. The people who refused Buddhism are often called anaryas.

The word Arya is also found to be used in Jain texts and scriptures such as the “Panavanasuta”.

While the debate for the Origin of Aryans and their history is still a topic of discussion where there are new questions arising every day; the temporary answer for this has been that all the North-Indian castes and the people speaking the North-Indian languages are Aryans while the castes of Southern-India and the people speaking South-Indian languages are Dravidians.